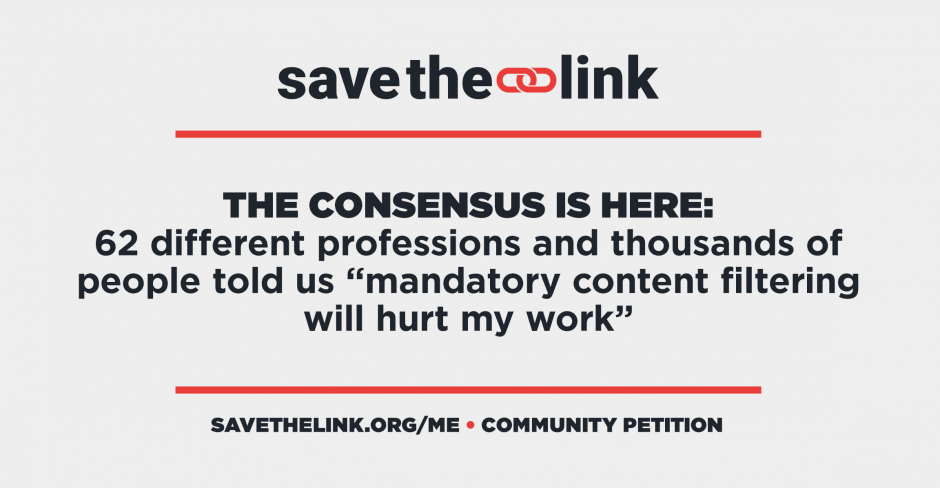 I delivered your voices on content filtering and the Link Tax to key MEPs in Brussels last week. Here’s the rundown.

Last week I visited Brussels on your behalf to deliver your signatures saying no to content filtering, and to the Link Tax.

This trip to the European Parliament was part of a 3-day action plan organised by the Association for the Public Domain (Communia), bringing people together from across Europe to strategise and stand together against these broken censorship rules.

Too often we hear from Big Media lobbyists about how these new rules will help save creative industries — whilst everyone else who will be harmed is pushed under the bus. Communia Association made sure that teachers, researchers, and educational institutions are all defended, and brought their rights into the European Parliament to speak up.

Today was a full day of the Copyright Action Days with debates, round tables and performances. Here are some photos: https://t.co/nAy6fcAyNG#FixCopyright@MarietjeSchaake@communia_eu#CommuniaSalon#CreatorsNetwork#copyright@CreateRefresh

At OpenMedia we also wanted to highlight the broad spectrum of professions that will be harmed by these proposals. When policy-makers refer to creative industries they ignore individual creators and online artists, obsessed with a measure of ‘creativity’ that is outdated and inaccurate.

That’s why did our own research to show how bad demanding platforms install filtering mechanisms to block content would be. We heard from people in 62 different professions that will be impacted, and put your voices directly into the hands of MEPs.

Similarly, Github, the open source code repository have been outspoken in the last weeks about how they will have to install content filtering mechanisms to scan and block code that may be copyrighted. They don’t want to harm their community in this way.

We were joined at our petition delivery by Polina from Free Software Foundation Europe, delivering the voices of 6,000 software developers speaking out on this restriction. A few days later we are seeing the latest compromise suggests giving “open source software developing platforms” an exception to the rules.

However, moving forward with a bad proposal by excepting everyone who can show it will harm them, is the wrong approach from decision-makers. What about those it will hurt, but who don't have an influential voice?

That’s what we wanted to highlight in our petition — academics, small businesses, publishers, librarians, researchers and thousands and thousands of people have said no to these proposals.  Rather than creating lists of exceptions to bad proposals, MEPs need to not vote for bad proposals at all.

The key committee vote on these measures is happening at the end of April. It will be our last big chance to influence the vote. We hope that this petition is a big nudge in the right direction, and we’ll be following up to provide further pressure to these influential MEPs.

P.S. Want to find out more about this campaign? You can also see all our articles, and the latest Save the Link news athttps://savethelink.org/latest