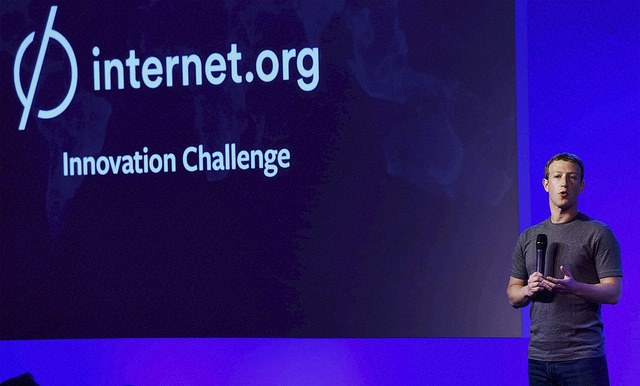 Zuckerberg’s Internet.org is NOT the real Internet. It’s a trap

In response to pressure from our community, OpenMedia launched a new campaign called No Fake Internet, inviting people from around the world to stand with open Internet advocates in places like India, Brazil, Zimbabwe, Paraguay, Panama, and others, who are demanding access to the full, real, open Internet. As many of you are already aware, their pleas come in response to growing outrage over Internet.org, a controversial new platform from Facebook and large telecom providers where selected services are prioritized over others. This is, of course, a move by Zuckerberg to make Facebook a gatekeeper of the Web that currently knows no boundaries.

In existing markets, Facebook is already pulling content from the Web onto its servers with the promise of faster load times. While this is certainly a less problematic practice then what Internet.org is offereing, it has a similar impact – namely, having Facebook take on more of a gatekeeper role concerning online content and services.

In the case of both Zuckerberg’s publishing deal and controversial Internet.org service, it is clear that despite their efforts to emulate the experience of the full Internet, Facebook’s platform is far from the real deal. Rather, it is a limited, closed, fake Internet designed to exercise control over what billions of new and soon-to-be Internet users can do online.

In the case of Internet.org, the service operates by tricking users’ into thinking they have access to the full Internet, when in reality they’re limited to Facebook and a small handful of websites chosen by Internet.org. You can learn more about the problems with Zuckerberg’s Internet.org from this blog we published, and this detailed letter signed by 65 organizations from over 30 countries. You can also see some of the amazing international media coverage it has received here, here, and here.

When we originally soft-launched the campaign on social media, we received some excellent, critical feedback from our community, which made our campaign much stronger. So thank you! The Internet is far more intelligent and better at spotting bugs and crafting messaging than just our small team at OpenMedia.

As a result, we refined No Fake Internet to reflect all the input we received, and we’re grateful to everyone who has weighed in.

We also want to address some of the misconceptions about Internet.org, and the spin being pushed by Zuckerberg and Facebook. To be clear, Zuckerberg and his team have in the past been important allies on some digital rights battles. But it’s clear that FacebookNet is taking us towards a more restricted and limited future for everyone. And since Internet affordability is an issue core to both our organization and community, we had no choice but to sound the alarm on Zuckerberg’s project.

Below you’ll find responses to some of the most common questions we’ve been asked by our community, and we hope it will help Internet advocates everywhere understand what lurks beneath the surface of Zuckerberg’s controversial project. And you want the full details of our position, you can refer to the PDF of the open letter to Facebook hosted here.

Q: Who exactly is speaking out about Internet.org?

A: Everyday Internet users, civil society organizations, and prominent businesses around the world are speaking out against Facebook’s controversial platform. Advocates from India, Brazil, Zimbabwe, Paraguay, Colombia, and Panama, amongst others, are deeply concerned about the implications Internet.org has for their friends, families, and local economies. Most recently, over 65 organizations from 30 countries have published an open letter to Facebook demanding Zuckerberg to change his course. You can see the full letter here.

In some cases, Internet.org has actually undermined long-standing efforts to develop access to the full, open Internet, which was the case in Panama where the government abandoned their National Internet Project after meeting with Zuckerberg.

For our part, OpenMedia is trying to amplify this message, and help educate Internet freedom advocates around the globe about the threats a platform like Internet.org poses. At this point, it’s no secret that Internet.org threatens innovation, free expression, and privacy online – now we need to all work together to get the word out.

Q: Do people really not know the difference between a service like Internet.org and the real Internet?

A: Unfortunately, yes. Research suggests that in countries like Indonesia or Thailand, and others where affordable access is not yet widespread, a significant number of users say that they don’t use the Internet, but love using Facebook. That’s right: in some cases, millions of Facebook users have no idea they’re using the Internet.

This is only made worse by the fact that Facebook appears to be deliberately trying to confuse Internet users into thinking Internet.org is the Internet. Don’t believe us? Just take a look at the ad campaigns running in India. As The Times of India notes, “The new campaign, started earlier this week, aims to make the social network's users believe that the Internet.org platform is actually 'free Internet.’” You can see screenshots of the ads in action here:

In short, Zuckerberg appears to be tricking Facebook users around the world into thinking they have full access to the Internet.

Q: But isn’t some Internet better than no Internet?

A: This is a false choice. Internet users know Facebook could very easily use its influence for good and promote access to the real open Internet. But they’re not. Instead of adapting an approach taken by a organizations like the Alliance for Affordable Internet, they’re promoting their closed platform.

You can see A4Ai’s Foundations of Internet Affordability below from their recent Affordability Report. There is no doubt that getting the disconnected online will require creativity, hard work, and regionally-specific solutions. Sadly, there is no “one-size-fits-all” solution. But one thing is clear: if Facebook wants to promote access to the Internet, then it should be to the whole Internet – the real Internet – not their cheap imitation.

Q: OK, so what exactly should Facebook do then?

1. Support universal access initiatives, such as Plan Ceibal in Uruguay, or the work of the Alliance for Affordable Internet project.

2. Provide access to the full Internet with a cap that matches what Facebook can afford to give away for free.

3. Create a shared open web standard for low-bandwidth apps suited to featured devices and zero rate all services that abide by the open standard on the platform.

4. Support local groups working towards the above crucial policy outcomes.

5. Experiment with more open approaches like the one Mozilla is testing out.

Internet.org unnceccessarily blocks the websites, apps, and services the world loves from being made available on equal terms. What’s worse, this fake Internet will also restrict access to local service providers struggling to get a foothold online. For example, this makes it all but impossible for the Africa’s next social media network to attract users and become successful.

The open web has been a boon for free expression, access to knowledge, democratic participation, and new forms of commerce precisely because it’s an open platform. When you insert a government or business gatekeeper you subvert all of the empowerment that stems from this amazing, global tool.

Every project that overlays top-down control over the Web errodes human potential. Internet.org is not the only threat to free expression online, but it’s one that we must not allow to take root. The next 3 billion Internet users deserve the same opportunity to unfettered connectivity. And at OpenMedia, we cannot wait to see what they’ll do with it.