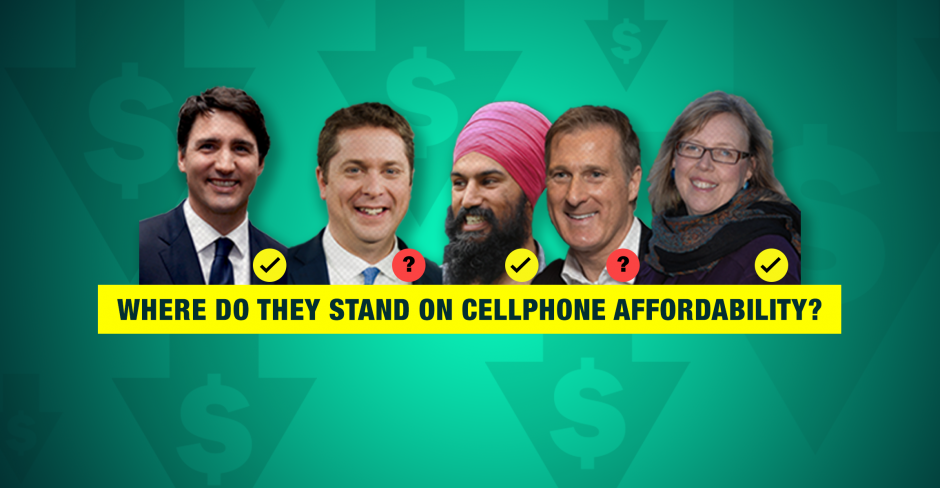 Will this be the election that breaks up the Big Three?

The winner of this election will determine whether Canada’s telecom oligopoly continues to rule or makes way for new competitors and lower prices.

This article by Rodrigo Samayoa was originally published by Rabble magazine.

Affordability is one of the big issues this election. From housing to childcare, families across the country are having to pay more and more every year to sustain themselves.

That’s why politicians from every party are proposing different solutions to tackle the rising cost of living.

One of the issues that is getting lots of attention this election is the cost of cell phone plans. While it’s minute compared to the rising costs of housing, it has become one of the most glaring examples of corporate greed in the country.

That’s because report after report has found that Canadians are lining the pockets of three massive companies that enjoy some of the highest profit margins of any telecom company in the world.

The Big Three (Bell, Telus and Rogers) control a whopping 92% of the Canadian cell phone market, giving them the power to charge what they want for cell phone services. Through armies of lobbyists, they have secured billions of dollars in public subsidies while they block new competition from entering the market.

People are sick and tired of this.

For many years people in Canada have been calling for lower cell phone prices, and now these calls are having an impact! Parties know that cutting cell phone prices is an important issue for voters and one where government action can have a real impact.

Ultimately, we need to break up the oligopoly of the Big Three through more competition. Three of the parties have already promised to do this to some extent. Just look at what each party has promised as of late September.

The promises parties make today are especially relevant this election as the next government will have to make some major decisions on Canada’s telecom policy.

First, the Canadian Radio-television Telecommunications Commission (CRTC) received a new policy direction earlier this year which directs it to consider competition, affordability, consumer interests and innovation when making regulatory decisions. The new government will play a role in how this new direction is implemented or whether a completely different policy direction is introduced.

Second, the CRTC is doing a comprehensive review of Canada’s mobile wireless services where it will explore issues like market competition and consider the introduction of Mobile Virtual Network Operators (MVNOs). MVNOs are independent network operators that buy wholesale access to the network of big telecom companies like Bell, and resell cell phone services to their customers. They are similar to what smaller providers like Teksavvy are for broadband Internet, and they could have a similar effect of lowering prices in the cell phone market.

These are major changes that will determine the direction of Canada’s cell phone market for decades to come and the next government will be the one that decides how these decisions are made.

That’s why the OpenMedia community is working on three separate, but related, campaigns to ensure these decisions go in the right direction.

2. After the election, OpenMedia will be handing in its policy submission to the CRTC’s  wireless services proceeding. As part of this, we are collecting information from people across the country to show how cell phone pricing and plans are impacting users. These results will be a key component of our submission and we need as many people as possible to fill out this survey. You can fill out the survey at https://openmedia.org/en/betterwireless4all

3. Finally, to ensure all of the commissioners and all MPs in the new government get the message that people in Canada are tired of high cell phone prices, we’re going to plaster Ottawa with ads highlighting the stories of how cell phone prices are affecting everyday people. If you have a story you wish to share, you can submit your story at https://act.openmedia.org/YourInternetStories