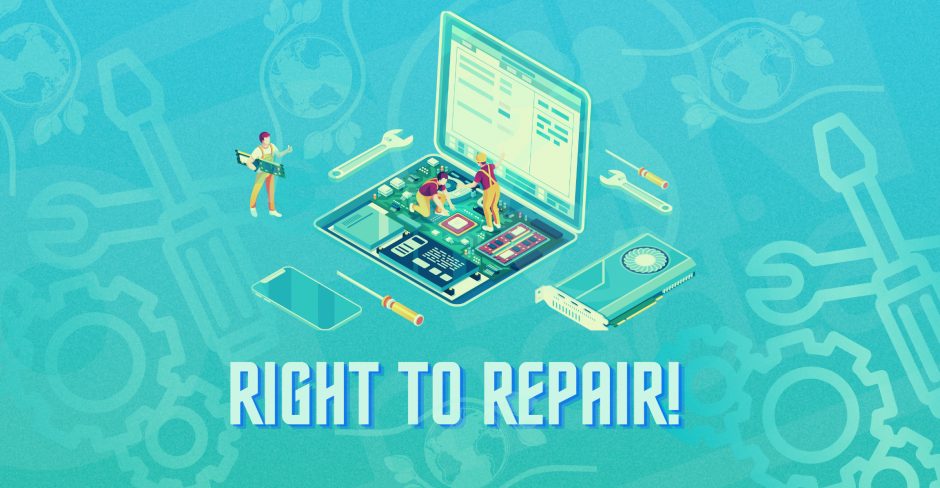 Why should I care about “Right to Repair”?

You own your device. So how can manufacturers block you from fixing it?

Manufacturers are preventing us from fixing the devices we own. They’re making it harder to repair our stuff, putting financial strain on us and hurting the environment — just so they can boost their profits.

You might be thinking: I’ve seen those cell phone repair kiosks at the mall! Don’t I already have the right to repair my devices?

Unfortunately, that’s not the case.

Manufacturers use legal loopholes to deny us the materials, information, and parts we need to fix our electronics ourselves or via a third party — even if we’re technically “allowed” to attempt a repair.

This system is a cash cow for manufacturers, and it works because they hold tremendous market power over us as individual consumers. If you can’t fix a broken device yourself or via a third party, you’ve got just two options: pay the manufacturer mega bucks to fix it for you, or throw it away and buy a brand new model.

I’m sure you’ve noticed that stuff isn’t built to last the way it used to be. In fact, many products are built to become intentionally — and often artificially — obsolete in a very short timeframe. This concept is known as planned obsolescence, and it’s one of the reasons that we find ourselves needing to replace our devices more often. More on that here from our friends at iFixit in the United States.

For everyday people, all of this means that owning a device that reliably meets our needs is getting even more expensive. That’s an especially heavy burden in today’s era of brutal inflation, which is already making it hard to afford even the basic necessities. And it makes us part of a terrible environmental problem, with an obscene amount of unnecessary e-waste being dumped into landfills every single day.

Our devices should not be so disposable, and our wallets are not endless pits of money for manufacturers to dip into. This system is not sustainable — and it MUST change.

That’s why the OpenMedia community and other right to repair advocates are pushing to create new laws, and amend existing ones, that empower everyday people and third parties to fix our devices ourselves.

Support for new right to repair laws is surging. A poll commissioned by OpenMedia and iFixit showed 3 out of 4 people across Canada would support right to repair legislation. The same poll also demonstrated this wide appeal cuts across all major political parties — that’s HUGE. Even the Prime Minister seems to agree; after the 2021 federal election, he explicitly told the Minister of Innovation, Science and Industry to work with the Minister of Environment and Climate Change to make the right to repair a reality in Canada.

But we’ve hit a speed bump. Thanks to the immense power manufacturers currently hold versus consumers — and our government’s focus on pushing other problematic bills — federal momentum on right to repair has stalled.

With Parliament returning from summer break in just a few weeks, we need to get right to repair on the agenda NOW if we hope to defend ourselves and our planet from years more of manufacturers’ greed. Will you sign the petition demanding our government take action to enshrine our broad right to repair in law?