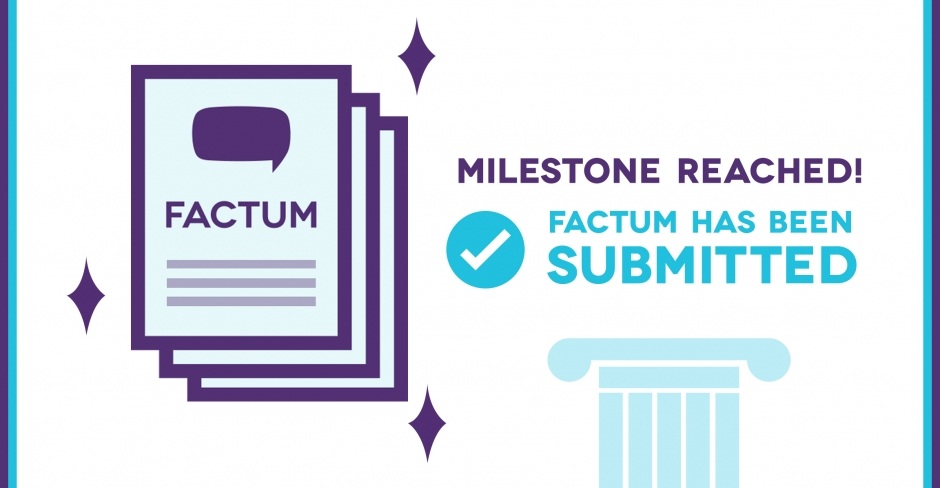 We did it! OpenMedia has submitted its arguments to the Supreme Court of Canada

OpenMedia has filed its arguments to the Supreme Court of Canada, defending your free expression online. What’s next?

Take a breather, everyone – it’s been a whirlwind few weeks.

We met with key decision-makers in Brussels to educate and engage them on the European Commission’s outrageous new copyright plans (featuring the link tax and new requirements for our favourite online services to sic copyright robocops on us). We’re ramping up our efforts aimed at kicking the Trans-Pacific Partnership to the curb. We’re preparing for a highly-anticipated consultation on data caps. And we’re putting the finishing touches on a powerful one-of-a-kind tool to maximize participation in a crucial national security consultation.

And that’s not even what I’m here to talk about!

Quietly working away behind the scenes, OpenMedia has also been compiling a rock-solid case for defending our online free expression at the Supreme Court of Canada. And now that we’ve filed our arguments, our legal A-team – the only kind we know – comprised of Edmonton-based lawyer Avnish Nanda, and open-Internet-warrior Cynthia Khoo get to take a breather and prepare for the next round.

What’s this all about?

This case at the Supreme Court of Canada could have a major impact on the ability of Internet users across the globe to access information and express themselves freely. The court will be considering an appeal to a decision made last year by the British Columbia Court of Appeal in Equustek Solutions Inc. -v- Jack that required Google to deindex results from its global search engine.

In the case underlying this Supreme Court battle, the plaintiff alleged that the defendant violated their trade secrets and passed off a counterfeit product as their own. They then turned to Google, demanding that the company remove links to the offending website – not just in Canada, but worldwide.

Earlier this year, OpenMedia was granted leave to intervene in this critical case and to make arguments defending free expression online and the rights of global Internet users to access information. While we’re not taking sides on the original ruling, OpenMedia argues that free expression and the core mechanisms of the Internet should be explicitly considered by the Court when it comes to restricting access to online content. We’re also arguing that the Internet should be a protected medium of communication under Canada’s Charter of Rights and Freedoms.

That’s right – we’re going straight to the Charter. And we’re doing it because we hear from our community members every day that free expression online is critical to navigating our digital lives.

Yes, it really matters that much.

As we argue in our factum:

The Internet is ubiquitous with all forms of expression in...society. It has revolutionized the nature of human connection, public discourse, education, the arts, business, scientific inquiry, journalism, politics, and nearly all other major aspects of public and private life. The medium enables civil rights movements, gives voice and representation to marginalized perspectives, democratizes the media, unleashes creativity, and ignites cultural and societal transformations.

And we’re not the only ones who recognize how important this issue is. The case was recently highlighted by Beverley McLachlin, Chief Justice of the Supreme Court of Canada, as one of the most significant the court will be hearing this fall. We’re also in excellent company — among the other groups granted intervenor status are the B.C. Civil Liberties Association, the Canadian Civil Liberties Association, the Electronic Frontier Foundation, and the Attorneys General of Canada and Ontario.

This is the big league – and we couldn’t have gotten here without the support of our community, who donated generously to ensure that we’d be fully-funded and ready to fight. Sincere thanks to all of you who chipped in!

Far from being just a Canadian issue, the outcomes of this case will produce a ripple effect felt worldwide. It is one of an increasing number of cases worldwide where web platforms are being asked to implement restrictions on expression online that reach far beyond the borders of the country where the case was heard. The online free expression legal safeguard we’re trying to establish will set a new standard we hope will be looked to as a model when courts in other countries consider censoring content on the Internet.

If this case goes badly, then it could lead to a domino effect, where foreign governments and commercial entities justify censorship of search results by pointing to the decision coming out of Canada.

But this is also an opportunity to turn the page on online censorship. This case is about precedent, and we’re arguing that setting a positive example in one of the most influential courts in the world will not only hugely defend freedom of expression for Canadians, but also for global Internet users.

We’ve asked to appear before the Court in December and expand upon our written arguments – which you can read in full here– and you’ll be the first to know when we find out if our request has been accepted. In the meantime, stay vigilant – and we’ll do the same.