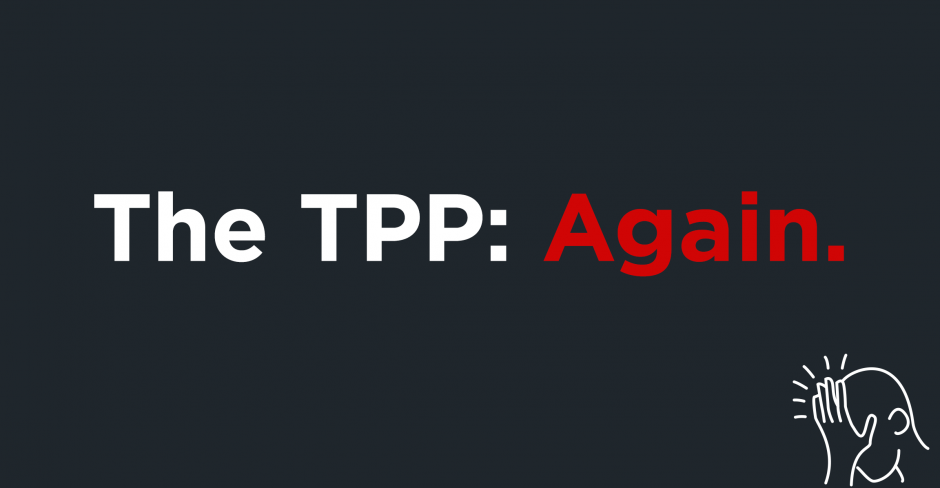 Canadians told the government loud and clear: The TPP is a bad deal for Canadians over the past five years. Yet here we are again, with the government pursuing negotiations with 11 of the original signatories without the U.S.

Trump may have pulled out – but that hasn’t stopped Canada from trying to revive the politically toxic Trans-Pacific Partnership (TPP) relabelled as “TPP-11”.

In fact, at this point the TPP could be finalized as early as next month. Despite worldwide outcry, eleven of the original signatories are back at the negotiating table, pushing for speedy ratification and ‘minimal changes’.

It’s outrageous. Canadians have ALREADY told our government: the TPP is an unfair deal that poses a serious threat to our digital rights.

This is our last chance to bury this. The consultation deadline for Canadians is October 30th. Let’s make sure our Trade Minister hears us loud and clear: It’s time to formally withdraw.

Pursuing secretive negotiations with no public scrutiny is an insult to our democracy.

Nearly half a million citizens worldwide have opposed the TPP just through OpenMedia's actions and millions more have taken action through countless campaigns, actions, protests and rallies over the past five years.

Even if the U.S. is out, the TPP remains a raw deal for Canadians.  It’s time to formally withdraw from the TPPand ensure any future trade agreements are democratically shaped by Canadians throughout the entire process.

Signing the TPP-11 would strike a major blow to Canadian democracy and further erode Canadians’ trust in public institutions, especially given how strongly opposed we’ve been to this deal since the very beginning. This is the very last chance for the government to get it right, but they need to hear from as many people as possible.

We only have 5 days left to raise our voices and put the pressure on. Will you add your voice to send the TPP, in any shape or form, back to the grave for good?

The last thing we need is to see the TPP’s extreme proposals resurrected and throw our digital rights out the window, all in the name of corporate interests and profits.