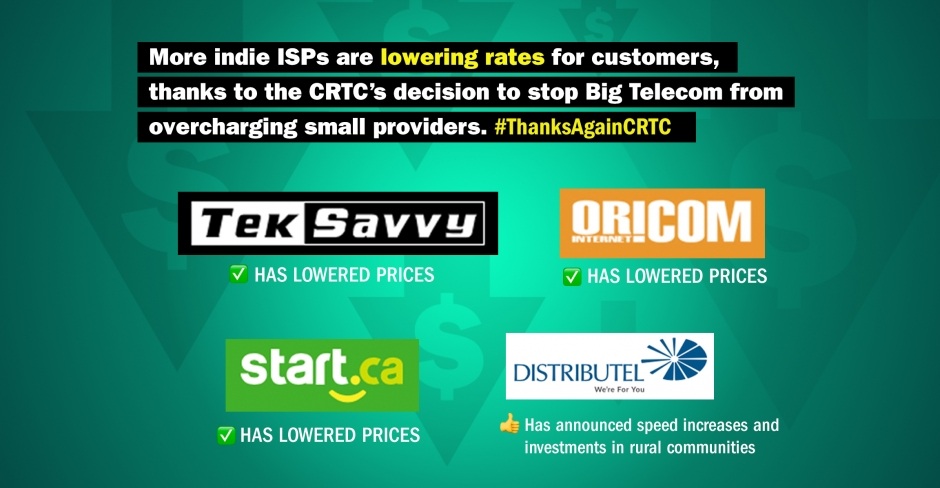 Back in August the CRTC significantly cut down the rates for what Big Telecom can charge smaller providers for network access. As a result, a handful of smaller Internet service providers are already passing that benefit on to their customers.

Over the past few weeks you may have heard the amazing news that smaller Internet providers in Canada are lowering their prices and improving their services as a result of a recent decision from the Canadian Radio-television and Telecommunications Commission (CRTC).

The CRTC decision came to the conclusion we’ve known all along: Big Telecom has been gouging smaller providers for years. But the decision significantly reduced wholesale rates for broadband Internet, dramatically shifting the landscape (and costs!) of wireline Internet in Canada.

This is a huge win! But it’s been a long process, and is a complicated decision. So let’s breakdown exactly what happened, and how it’s leading to cheaper prices for your Internet.

What are wholesale rates?

The rates the CRTC sets are estimated based on evidence companies provide about how much it costs them to operate their network. There are two aspects to the rates for wholesale access: capacity and access. Capacity is the cost of the monthly data used by the smaller ISP’s subscribers, while access refers to the overall cost to connect the smaller ISP to the larger telecom company's networks.

I should note that August's CRTC decision only set the rates for cable and DSL Internet – we are still waiting for the rates for wholesale access to fibre.

Wholesale access is not new, but the final rates are

Broadband wholesale access has been around for many years in Canada. But we’ve been operating on interim, or temporary, rates for a long time. It’s been a long road to get to these final rates, which is why we are only now seeing such a dramatic impact on our Internet bills, as the dust is finally settling.

Up until 2015, wholesale access did not apply to the newer technologies and faster speeds that the larger telecoms had available, which meant that smaller competitors were at a major disadvantage.

In July 2015, the CRTC mandated wholesale access for high speed Internet, but the rates remained too high for smaller providers to be able to compete with the bigger guys on a level playing field.

So in October 2016, after consulting with the incumbents on what these rates should be, the CRTC ruled that Big Telecom’s proposals were unreasonable. In order to foster competition in the broadband market, the CRTC deemed it would be necessary to cut down the proposed network access rates.

And so, the CRTC established interim rates in 2016, reducing proposed rates for network access by up to 39% and reducing the rate for capacity (transport of Internet data) by up to 89%. In the meantime, the CRTC continued its own analysis of the rates and asking companies for more information before issuing their final rates. As a result of lower wholesale access interim rates, Teksavvy lowered its customer’s monthly bills.

Now, fast forward to 2019. This past August, after years of analysis, the CRTC has set the final rates– which are even lower than the interim rates it set in October 2016. (That means that the original rates proposed by Big Telecom were so unreasonably high, they had to be lowered twice!)

This decision clearly demonstrates that Big Telecom has been grossly overcharging smaller providers for network access for years. This type of gouging has made it difficult for smaller providers to compete and, as a result, customers like you have also been subject to higher prices and less choice of providers.

So that’s a 3-year refund for being overcharged, heading straight back to the smaller providers.

In turn, a handful of these smaller indie providers, including Teksavvy, Distributel, Start.ca and Oricom have decided to pass on their savings directly on to their customers. They’re voluntarily lowering monthly bills, providing higher speeds (at no cost) and reaffirming commitments to continue investing in rural communities.

But we can’t, and won’t, let their tantrums get in the way of good policy, and a fair playing field.

We’ve heard these arguments about withdrawing investment before – in fact, just about every time that Big Telecom loses a CRTC decision in favour of increased competition, they threaten the same things. But yet, they continue to invest, announce future rollouts, and work towards 5G, all while maintaining their position as some of the most profitable telecom companies in the world.

As George Burger, co-founder of VMedia, rightly pointed out, “Any unfairness pales in comparison to what Canadian consumers have had to put up with for years.”

Think about it this way: When was the last time that one of Canada’s major Internet providers lowered their prices for customers in response to receiving billions in taxpayer subsidies? It’s far more common for them to jack up our prices than give us a break voluntarily. (You can see many stories from people across Canada attesting to this here).

Big Telecom is threatened by the prospect of real competition. They know they’re going to lose customers to providers who show care for their customers and want to provide service to underserved areas in Canada. Meaningful alternatives to Big Telecom is a huge threat to them – because it means they’ll actually have to do better.

The positive impact of the CRTC’s decision in August is already being felt by thousands of people, even though it’s only been a couple of weeks. Indie ISPs have decided to share the benefits of this decision with their customers immediately. Even though, despite the fact that if the Federal Court of Appeal overturned the CRTC’s decision in favour of Big Telecom, they could face losses.

In fact, the Federal Court of Appeal has already issued a temporary stay on the new CRTC rates, which means that the new wholesale rates will be suspended while the case is heard by the Federal Court.

So what’s next for our Internet prices?

There are three major pieces of the puzzle remaining, that could impact our home Internet rates.

First of all, we have to see how the case proceeds at the Federal Court of Appeal.

And, of course, we’re still waiting for the same wholesale rate ruling above, for fibre Internet. Access to fibre was mandated back in the CRTC’s July 2015 decision. However, the process to finalize those rates still has a long way to go before customers will see any results. But the August decision certainly creates a strong, encouraging precedent, signaling that the CRTC is finally addressing the fact that Big Telecom’s gouging has been going on for too long and it’s time for a much needed change.

Finally, the CRTC is currently reviewing the entire state of our wireless services in Canada. And if they rule in favour of increased competition, through Mobile Virtual Network Operators (MVNOs) – which we’ve written more about here– it could mean the same types of exciting price decreases for your cell phones, that we’re seeing for home Internet. (If this is something you are keen on, take five minutes to fill out this quick survey on cell phone plans. OpenMedia will submit those responses to the CRTC on behalf of its community to show it our cell phone market is still broken.)

OpenMedia has recently launched a tool to collect people’s stories with their cell phone and home Internet services. Then we’ll select the most powerful stories and plaster them in ads the next government sees the minute it lands in Ottawa. Share your story here!