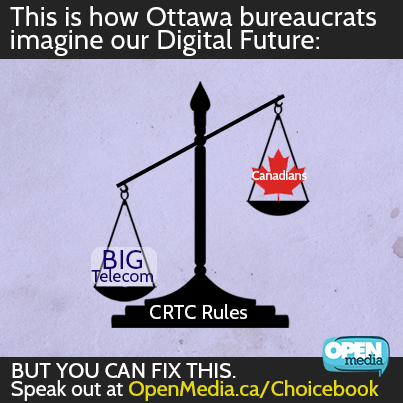 Should Rogers be allowed to block us from watching Hockey Night online?

Big Telecom is running scared of cord-cutters - and is doing what it takes to block them from watching their favourite shows online. It looks like Rogers is even planning to block Canadians from watching Hockey Night online. They want to trap Canadians in expensive and outdated service plans - and they’re using their power and control to do so. It’s not too late to push back by telling decision-makers at the CRTC to put Canadians first when it comes to our digital future. Have you cut the cord from your television service recently - or are you considering it? If so, you’ve probably noticed it’s getting more difficult to watch the content you want online. The reason is clear - Big Telecom is terrified of cord-cutters and is determined to do what it takes to trap Canadians in their expensive TV service plans.

For example, it looks like Bell is blocking the growing number of cord-cutters - including our own Steve Anderson - from being able to CTV content like the Daily Show online. Bell owns CTV and they’ve introduced strict blocking mechanisms to stop many Canadians from watching the channel online. Even subscribers to non-Bell cable TV providers are getting blocked online. If you subscribe to CTV through Shaw or Telus, you’re out of luck. Sound fair to you?

And you can bet Bell isn’t the only Big Telecom giant up to these tricks. Rogers is gearing up to cut off millions of hockey fans from being able to watch Hockey Night in Canada online. Hockey Night is currently available for free online to all Canadians on the CBC website. But as telecom analyst Terry Dawes explains in this article about Rogers’ recent multi-billion dollar purchase of NHL hockey rights:

Rogers will own and control the online properties NHL Center Ice and NHL GameCenter Live, in Canada. Cord-cutters who’ve gotten used to watching “Hockey Night in Canada” streaming on the CBC site for free will be out of luck next season. Your only option for watching the games will be to pay Rogers.

These ridiculous and petty-minded digital blockades fly in the face of the growing number of Canadians who are cutting the cord and turning to the Internet for digital services. As our own Micaela Evans explains, more and more Canadians are making the shift from paying for expensive cable TV to accessing the shows they follow online. Big Telecom is running scared of this and what’s why they’re fighting a rearguard action to trap Canadians into their outdated cable TV plans.

Let’s be clear about what’s happening here: Bell and Rogers are using their power and control over our media options to force Canadians into subscribing to what many now view as the outdated medium of TV. They’ve even effectively confessed to this strategy on Facebook, telling this Bell customer to subscribe to Bell TV if she wanted to access CTV content.

This is why it’s a terrible idea to have the same giant telecom conglomerates own both the content (TV stations) and the services (cable TV, Internet) over which that content is provided. As we’ve seen, this outdated model amounts to nothing more than a licence for price-gouging - it’s why Canadians pay such high prices for digital services. It’s past time we took common sense measures to break up these telecom giants to ensure that Canadians get a fair deal.

Do you think giant telecom conglomerates like Rogers should be allowed to block you from watching Hockey Night in Canada online?

If not then luckily, there’s a CRTC consultation called Choicebook going on right now that could fix these problems and stop Big Telecom from blocking Canadians accessing online content. Frustratingly, decision-makers at the CRTC have worded their consultation in a way that’s hugely favourable to Big Telecom’s interests, and if we don’t take action now Big Telecom could end up even more powerful at the end of this process.

But it’s not too late to redress the balance. You can make sure Canadians’ voices get heard by using our handy guide at https://openmedia.ca/choicebook - we’ve designed it as a straightforward way to make it easy for you to tell the CRTC where they’ve got it wrong, and what we need to do to fix our broken market.

Remember: if we let Big Telecom have its way we could end up with an Internet that resembles the walled garden of TV, with restrictive choices, roadblocks, and sky-high prices. Canadians deserve a digital future that’s open to all - so let’s each take a few moments to tell the CRTC to put Canadians first.