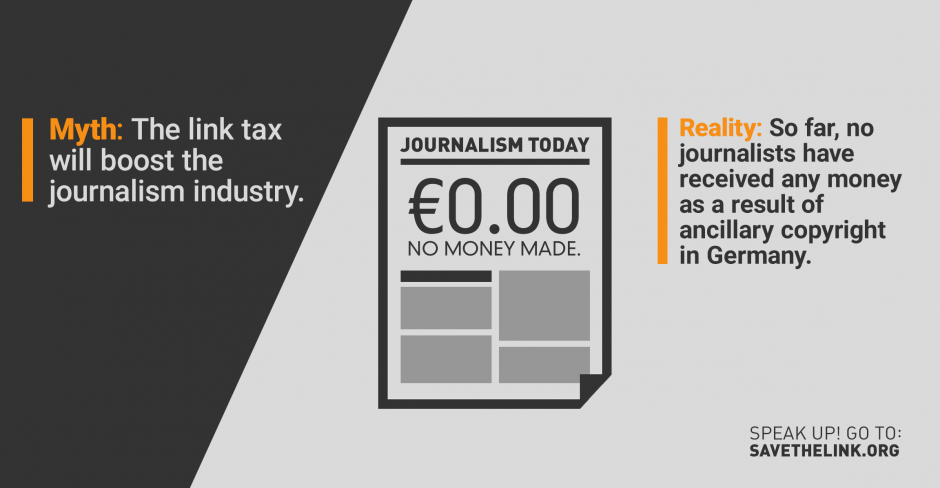 The link tax: one tech journalist isn’t buying the claim that it will be good for journalists. Read more from Jennifer Baker.

Proponents of ancillary copyright (AKA the link tax) claim that the policy will help journalists – but we’re skeptical.

After seeing this tweet from @BrusselsGeek – tech journalist Jennifer Baker – I sat down with her to chat about ancillary copyright, and how she feels it will impact her as a journalist.

#ancillarycopyright aahhhhah! Everyone is so concerned about us poor journalists, yet there are remarkably few of us asked for an opinion!

Here’s an edited version of our conversation below:

Q: Are journalists in the EU concerned about ancillary copyright?

A: I hear many of them talking about it, but then again I am in a small bubble in Brussels. I can only really speak on my own behalf – I genuinely don’t know what other journalists are thinking about ancillary copyright. I know a little bit in Spain that some smaller publishers are really annoyed at the attempts there to sort of create ancillary copyright with no right to waive, which has become a battle between different publishers in Spain. But I haven’t seen any lobby groups of journalists – say, rather than rightsholders – tackling this.

Q: What trends are you seeing yourself in journalism – in terms of readership – and do you think ancillary copyright will help or hurt those trends?

A:  Well obviously it’s not really a trend anymore, it’s a sort of solid fact now, that most publications are online rather than in hard copy. And obviously ancillary copyright is far more relevant for online publications than offline ones because I suppose it’s easier to pick up and grab a snippet and link to it, as opposed to offline. That, I guess, is why ancillary copyright matters – we’re now all living in a post-hard copy world.

Q: When I saw your tweet that struck a chord for me. Why do you think more people aren’t asking journalists themselves how they feel about this issue?

Q: What we’ve heard critics say so far is that ancillary copyright could hurt media diversity, and it seems in a way almost designed to entrench incumbency. What’s your take on that?

A: I think that’s probably true. I think that when you look at the publishers that are lobbying heavily for ancillary copyright, it’s the big ones, it’s the ones that maybe aren’t as agile and haven’t moved as fast in an online world. I think possibly they’re trying to bolster an outmoded business model.

Unfortunately I think a lot of problems with news publishing – and I am only really speaking about news publishing here – it’s an attempt to close the stable door after the horse has bolted. I think the problems that the publishing industry is currently facing were ones that were created 10, 15 years ago. I think that the idea that publishers decided back with the advent of the Internet to put news sites up and give away their content for free was ridiculous and ludicrous and shouldn’t have happened, because why would you do that? And I constantly compare it to the games industry. With computer games there used to be physical DVDs or even cassettes that we used to buy and put them in our machines at home, and of course the Sonys and the Segas and the Nintendos made the machines, as well, that we played them on. But the games industry didn’t drop everything with the advent of the Internet. It said “brilliant – we’ll sell you our content online!” and it’s actually multiplied its consumers and customers and become an even bigger industry.

I think I guess that's because they had tech people on the inside who saw that you could sell things on the Internet, saw that was coming, that was the future. But clearly the newspaper and the publishing industry didn’t see that coming because instead of saying “oh yeah – we’ll sell you our content online” they just gave it away for free, which is so unbelievably stupid. I shake my head and think “why did they not see this?” The music industry was the very same, they didn’t get on it fast enough to provide enough channels for people to legally get their music online – and because they were too entrenched and too narrowly focused on their old business model.

I also think, as a journalist, I want my stories read. I am delighted when my story is on Google News. It means more people are going to read me and it drives more traffic to the website. So I really don’t think this is about content. I think this is an effort by big publishers to strike back over the issue of advertising. And I think it’s a bit disingenuous to claim that this is about using our content – it’s not. It’s about siphoning off the advertising revenue. I’m really not being very nice to the people who pay my wages, but our job is to bite the hand that feeds. If you are going to do this, don’t be disingenuous about it; you’re out to get Google because they are sucking your advertising, that’s for sure. But don’t pretend that this is about protecting individual journalists' content – because it’s not.

Q: We’ve found, in talking about ancillary copyright with our community, that it is not very well understood by the public. Do you think that journalists understand it?

A: Not unless they’re copyright and tech journalists. I had to explain it to some of my friends – and they were as amused at the idea that this was going to make them better off. As journalists we hand over our copyright to the publications we write for as soon as we hand over the copy. And we’re paid for it, we no longer have that copyright. We’re not going to get any extra income if it’s reused. That’s not how news journalism really works.

Q: We know that ancillary copyright is intended to put money back into the pockets of the big publishers. Do you think it will help put money in journalists pockets?

A: Not necessarily, not unless the publishers suddenly decide to pay us more. I’ve been a journalist for 20 years and I can tell you the word rates have gone down, not up. Unless you tie it to some sort of legal requirement so that it goes to the journalists, I can’t see that it will make really any difference. The immediate effect is not going to make any effect for journalists, the knock on effect is that maybe if the big publishers become more profitable they might be more generous about hiring more journalists, or paying their journalists better, but I think often they care more about their shareholders than their journalists.

Jennifer Baker is a freelance journalist writing on technology issues