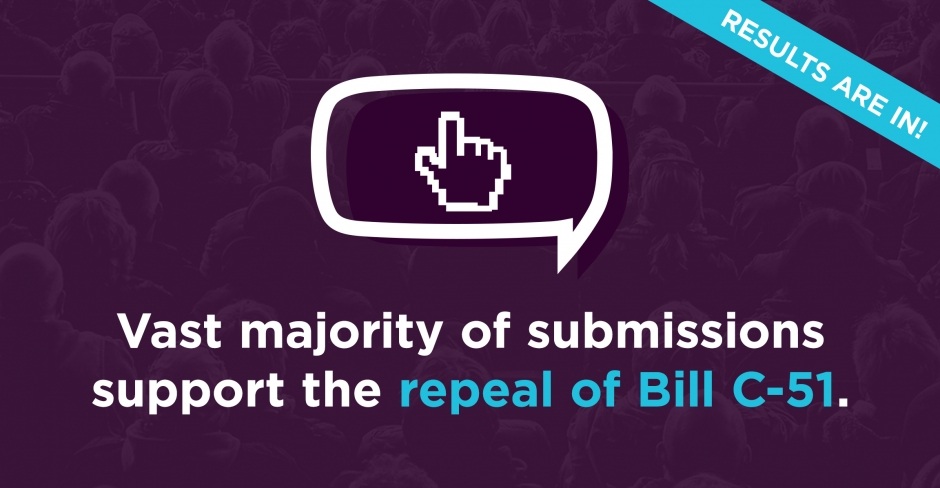 A crowdsourced analysis reveals that 88.7% of submissions that mention Bill C-51 support the repeal of the controversial surveillance legislation.

The analysis also showed strong support for the protection of Canadians’ privacy, and deep concern about the sharing of personal information with Canadian agencies or foreign governments. Organizers at OpenMedia, which built an online tool to enable the public to assess the consultation submissions, say that although these are early results, they are a strong indication of the public’s appetite to repeal the legislation.

“It’s clear from these results that Canadians want to wipe the slate clean and completely repeal this unpopular spying bill,” said Victoria Henry, privacy campaigner with OpenMedia. “These findings should give Public Safety Minister Ralph Goodale pause for thought — merely tinkering around the edges of Bill C-51 with modest amendments will not satisfy Canadians. Minister Goodale needs to listen to the tens of thousands of Canadians who have taken part in his government’s consultation and commit to repealing Bill C-51 entirely.”

Initially the government refused to make the consultation submissions public, but finally agreed to do so after an open letter was published in the National Observer from over 30 civil society organizations and experts. A second tranche of consultation submissions was published recently, with a further round still to come. The government has also promised to publish their own summary of the findings, and to bring forward proposals to amend Bill C-51 before Parliament rises for its summer break in June.

Canadians can take part in analysing the over 59,000 public comments submitted as part of the National Security consultation at CrowdsourceC51.ca