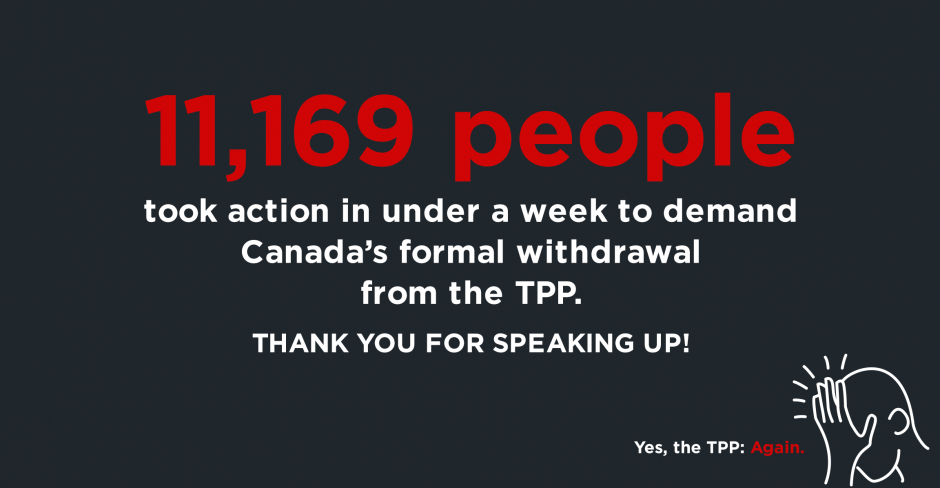 Over 11,000 Canadians have spoken: NO to pursuing TPP negotiations

Once again, Canadians have come together in the thousands to send a clear message to the federal government: The TPP is a bad deal for our country, regardless of U.S. involvement. Thanks for speaking out!

After the U.S. officially withdrew from the infamous Trans-Pacific Partnership (TPP) — a closed door trade deal originally negotiated between  Australia, Brunei Darussalam, Canada, Chile, Japan, Malaysia, Mexico, New Zealand, Peru, Singapore, the United States and Vietnam— many thought that would mark the end of the deal. However, negotiators from the 11 remaining nations have continued to secretly meet throughout the year to move forward with the deal relabelled as “TPP-11”, once again, with little public scrutiny.

Why so secret (again!)? Because the less public scrutiny, the quicker that they can ram through the deal using a minimal changes approach. Sadly for them, we’ve been watching closely and we mobilized our community to flood the Canadians government’s consultation.

The result? In less than a week, 11,169 Canadians voiced their opposition to the politically toxic deal. And millions of citizens worldwide have already protested through countless campaigns, actions, protests, and rallies over the past five years.

This is a call that the Canadian government can no longer ignore, especially coming from a government that has committed to a ‘progressive’ trade deal in the similar NAFTA.

No TPP means no TPP-11. Canadians will no longer tolerate secretive trade deals that put the public interest at the bottom of the priority list and threaten our digital rights, such as our free expression online and access to knowledge.

The government’s consultation is now closed as of October 30th, but you can still add your name to the movement against the TPP at: act.openmedia.org/killtheTPP

You can also send our Let’s Talk TPP Citizen’s report to your local MP here to ramp up the pressure for our government to immediately withdraw from the deal, and embrace transparent and democratic trade processes moving forward.

Thanks again for speaking out! We’ve come this far and we’ll keep going until this deal is gone for good.