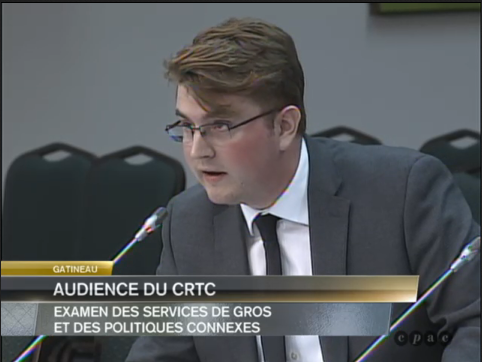 We Won! As you may have heard, a major ruling on Wednesday from the Canadian Radio-Television and Telecommunications Commission (CRTC) ensures a significant step forward for Canadians’ ability to access affordable Internet options independent of Canada’s large telecom providers. In short, the ruling creates fair rules forcing Big Telecom to make their digital infrastructure available to small independent ISPs (i.e., outside of Big Telecom) at a reasonable rate, so they are empowered to sell ultra-fast fibre Internet services to Canadians. This means faster, cheaper fibre connections could be coming to your household soon!

This is a huge win for Canadian Internet users and businesses. As many of you will recall, in late 2014, OpenMedia delivered crowdsourced input from over 30,000 Canadians as part of the hearing that informed Wednesday’s decision.

Never forget this: When enough people stand together and speak out, they can force the hands of decision-makers, move governments, and change the rules of the game. And you just proved that yesterday.

With your help, the small team at OpenMedia turned crowdsourced policy into government policy. This was possible because our ideas came from over 30,000 of you who spoke out throughout the hearing. What Canadians asked for just became the law of the land, and it makes it a terribly exciting day for the open Internet in Canada.

We had a chance to explain this a bit more on our live broadcast via Periscope (be sure to follow us on Periscope through our Twitter account @OpenMedia_ca). You can see our Founder and Executive Director, Steve Anderson, and myself explain what Wednesday’s decision means for Canadians, and how we got here in the video below:

What Does This Mean for Canadian Internet Users?

Canada currently lags behind most developed countries when it comes to fibre access. Why? Because the rent is too damn high.

Currently, Big Telecom operators control 92% of the Internet market and Canadians face some of the highest Internet prices in the industrialized world. A recent global study from the U.S. Federal Communications Commission (FCC) shows Canada places 31st out of 37 surveyed countries when it comes to Internet costs. This is a major barrier to adoption of Internet services – especially fibre.

Now, if you look elsewhere in the world, you’ll learn that for most developed nations fibre is the Internet of today – not the Internet of tomorrow like it is in Canada. Other developed countries have 20 or 30 times more access to affordable fibre than we have here, and we need to catch up as soon as possible.

For example, just under 3% of Canadian Internet users currently use ultra-fast fibre Internet, compared to nearly 70% in Japan. What’s worse: prices are way out of whack – with Big Telecom’s best fibre packages in cities like Toronto costing over $180 per month.

By creating fair open access rules, the CRTC has taken bold steps toward catching up with our international peers and bringing costs down. The only catch here is that we’re going to have to closely monitor the implementation of this ruling to ensure we get fair access to a range of fibre Internet options as soon as possible.

The team at OpenMedia campaigned tirelessly for well over a year to ensure that your voices were heard. In January, 2014 we put the views of over 30,000 Canadians on the public record. Later, we provided extensive written and oral comments to the Commission, to ensure the hearing was not dominated by Big Telecom giants.

Finally, in December, we presented your views on the future of Canada’s Internet to key decision-makers at CRTC headquarters in Gatineau, Quebec. You can see video of our presentation below (and also be sure to check out the full report-back and transcript if you wanna check out the nitty-gritty):

So, how did we know what to say? What was our approach? Well, as I wrote immediately after the hearing:

...our goals were crowdsourced from over 30,000 Canadians. Our approach was vetted by a network of nationally-recognized experts. And our arguments were painstakingly researched and developed in a significant 92 page submission by our dedicated Communications and Community Engagement Volunteer, Cynthia Khoo. If the Commission is truly committed to “putting Canadians at the heart of their telecommunications system”, then what more could they have asked for?

You got us here by speaking out, and believing that we could build a better Internet for Canada. And decision-makers at the CRTC listened.

Where Do We Go From Here?

Right now, the CRTC is reviewing whether broadband Internet should be included as a basic service in their Review of basic telecommunication services hearing. This will determine whether or not 100% of Canadians get access to faster, cheaper, world-class Internet, or whether the Big Telecom companies keep us trapped in high prices and slow speeds going forward.

For some readers, access to the Internet may feel like a given. But right now, we’ve got a lot of people missing out. For Canada’s highest earners, Internet adoption is nearly universal at over 95%. But for low income families, more than 2 in 5 (44%) households have no Internet access, and over 30% don’t have a mobile phone.

Similarly, Canada has the lowest mobile adoption amongst OECD countries, and a brand new government report just confirmed we once again have the highest mobile phone prices amongst G7 countries.

We need to take action now, and ensure we’re investing in the digital infrastructure that will drive Canada’s economy well into the future. Since 20% or more of Canadians to not have broadband Internet access at home, waiting for Big Telecom companies to step in isn’t going to cut it. It’s time for us to take action.

OpenMedia has already put the perspective of over 25,000 Canadians on the public record as part of the proceeding and will be intervening to ensure 100% of Canadians get access to affordable, world-class Internet services.

If you’re feeling inspired, and want to help us beat back Big Telecom again, join us by speaking out at UnblockCanada.ca.

In the meantime, we’ll be watching Wednesday’s decision closely to ensure their rules are fair, and new services get to Canadians sooner rather than later. We’ll keep you posted.