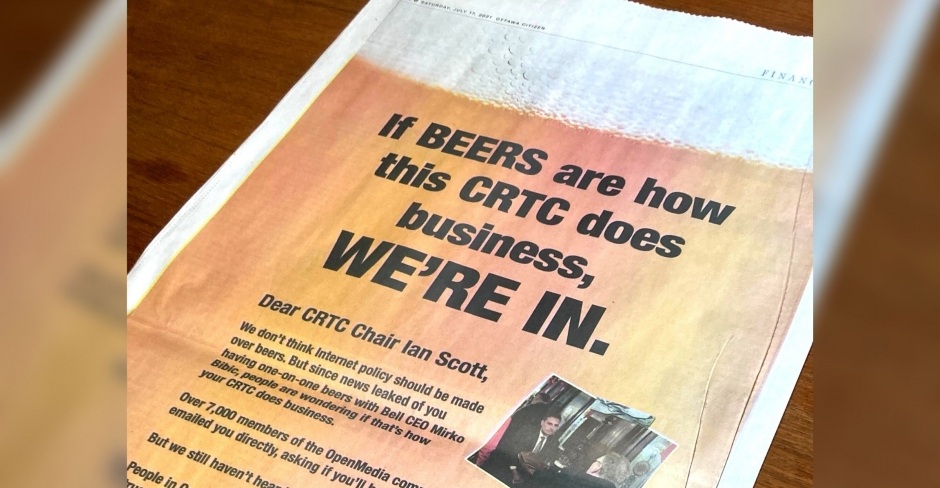 On July 17th, OpenMedia placed a full-page ad in the Ottawa Citizen inviting CRTC Chair Ian Scott for a beer to discuss Internet regulation — just like he did with Bell!

Picture this: It’s Saturday morning in Ottawa. CRTC Chair Ian Scott grabs his morning coffee and sits down to read the paper. He flips open the Ottawa Citizen, and — SPIT TAKE! 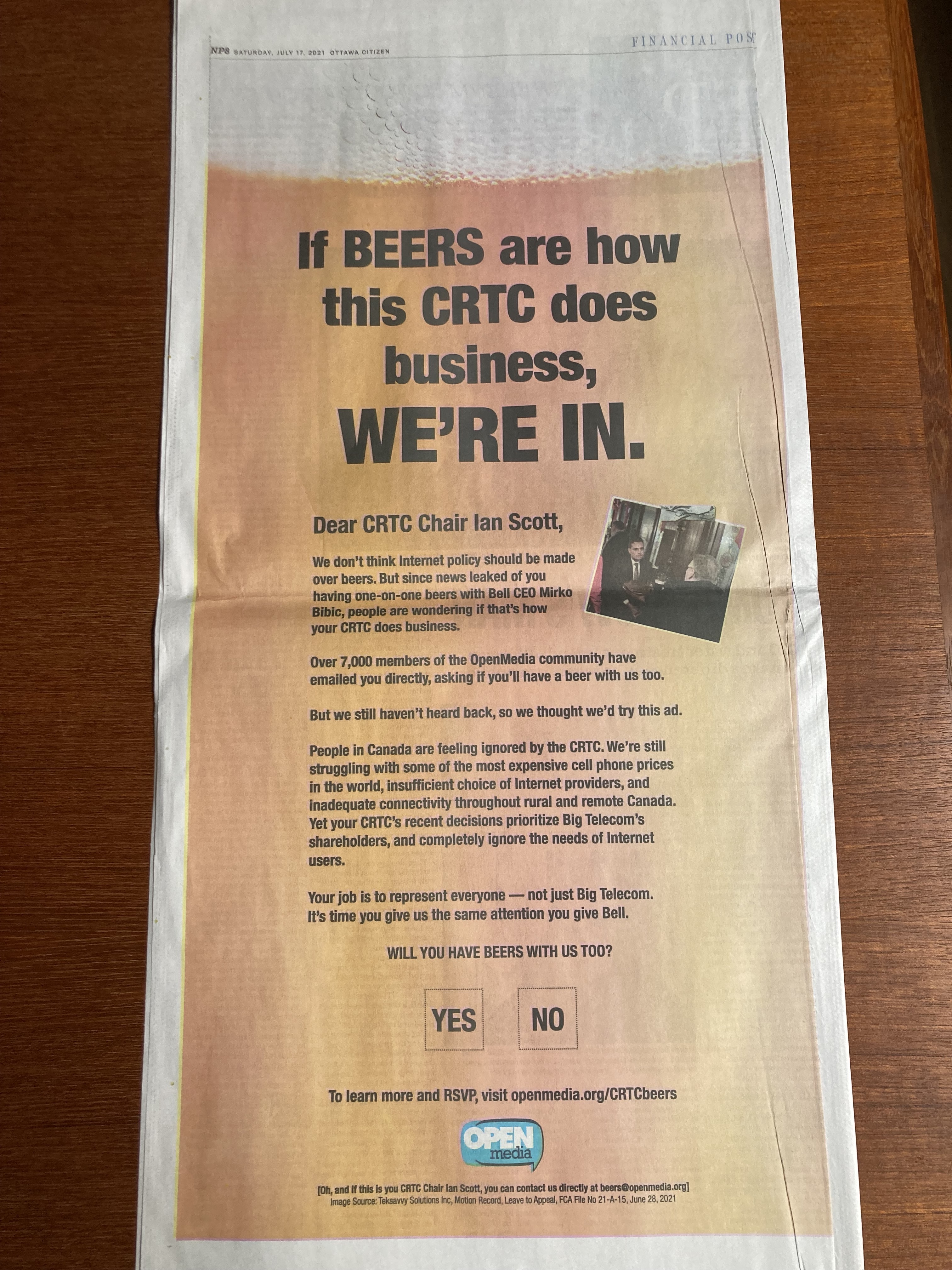 Having difficulty reading the text in the photo? Click here or on the image above for the full-sized version.

That’s right! On July 17th, we ran a full-page ad in the Ottawa Citizen with a simple message: If CRTC Chair Ian Scott is regulating the Internet via friendly beers with Big Telecom executives, he needs to have a friendly beer with Canadians, too.

You may have heard about the 11 one-on-one lobbying meetings the CRTC Chair took with Big Telecom before making numerous decisions in their favour — including the photographed beer with Bell CEO Mirko Bibic.

On June 12, the Toronto Star reported that Big Telecom met with Industry, Science, and Economic Development (ISED) Canada over 250 times since the CRTC’s 2019 wholesale rates ruling — and nearly a DOZEN times just with CRTC Chair Ian Scott himself. In contrast, indie ISPs met with the same groups just 19 times in the same timeframe, while OpenMedia met with ISED just 4 times during that period, and not once with the CRTC.

That’s a ton of lobbying, but the infamous Bell-CRTC meeting over beers at an Ottawa pub might just be the worst of them all. In broad daylight, Scott sat down for beers with Bell CEO Mirko Bibic — just one week after Bell filed its appeal of the CRTC’s 2019 wholesale rates.

And given the recent scandal that unfolded as the CRTC stunned everyone by reversing its own policy and taking Bell’s side at the expense of Internet customers across the country, it’s pretty easy to see why we’re concerned Chair Scott is only listening to one side.

Our invitation for beers may seem tongue-in-cheek, but we’re not joking. We don’t think drafting Internet regulation over a cold one is right. But if this is how the CRTC works now, we're game to do what it takes to advocate on behalf of our community.

People in Canada are still paying some of the highest rates for their Internet and mobile data of any country in the world. People are suffering, and those with the least connectivity and least ability to pay, are the most hurt by all of this.

Since Scott’s beer with Bell, the CRTC threw out its own calculations on fair wholesale rates, ignoring its own analysis that Big Telecom dominates the market and extracts monopoly profits in Canada, and even ignored Cabinet’s policy direction that the CRTC must prioritize affordability. Not to mention their complete rejection of MVNOs, which would have brought in more affordable cell phone rates.

These rulings are straight out of Big Telecom’s fantasy policy wishlist — so much so that many experts, including a past CRTC chair, expressed their astonishment at the ridiculousness of the decision. Coincidence? We think not.

So here’s our exact proposal for Ian Scott: Meet us and a handful of OpenMedia community members for a beer, and hear directly from the folks he’s been screwing over with the CRTC’s recent decisions.

Seem more than fair to you? Join over 7,000 others by sending the invitation to CRTC Chair Ian Scott right now: Will he meet OpenMedia and 3 members of our community for regulatory beers on the patio?