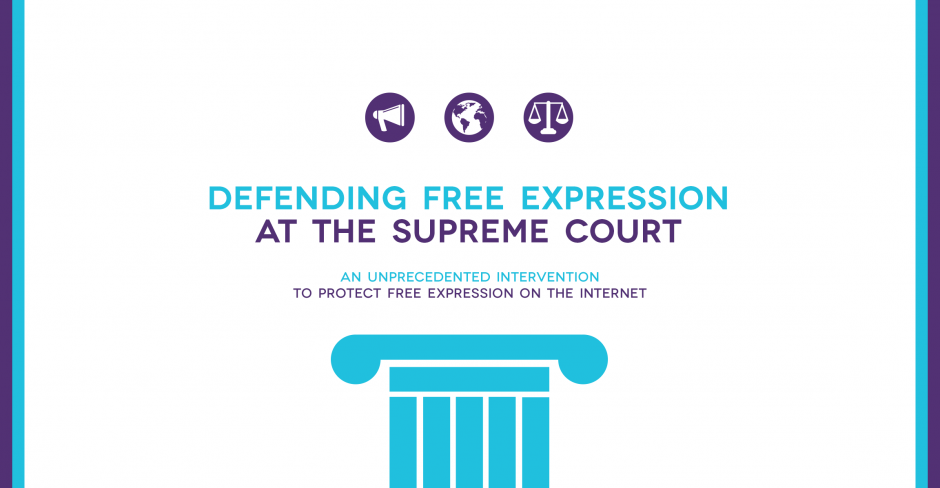 OpenMedia is defending your free expression at the Supreme Court

OpenMedia will be intervening in a landmark case at the Supreme Court of Canada – defending the free expression of Internet users across the globe.

This is a big moment for the OpenMedia community. For the first time, your OpenMedia team will be formally intervening in a court proceeding to protect the free expression rights of global Internet users – and at the Supreme Court no less!

Two months ago, we were grappling with the question of whether we had the time and resources to take on this project. After many meetings (and a little bit of soul searching) we all came to the same conclusion: there are some things we just have to do. And taking this unprecedented opportunity to stand up for free expression online – not only on behalf of Canadians, but on behalf of Internet users everywhere who will feel the impacts of this case – met all our criteria for a must-do in the books of Internet freedom advocates.

This case at the Supreme Court of Canada will have a huge impact on the ability of Internet users across the globe to access information and express themselves freely. The court will be considering an appeal to a decision made last year by the British Columbia Court of Appeal in Equustek Solutions Inc. v. Jack that required global search giant, Google, to remove – or deindex – results from its global search engine.

Today we’re announcing that we’ve been accepted as intervenors, and are in the process of putting together a rock-solid argument on behalf of Internet users – but that’s hardly the beginning of the story. Over the past two months, we’ve assembled a team of dedicated staff and exemplary external legal help, we’ve successfully argued to the Supreme Court of Canada that we should be allowed to intervene in this process on behalf of Internet users, and we’ve read all the research we can get our hot little hands on, in anticipation of needing to be as prepared as possible for the big league.

While we won’t be taking sides on the original ruling, OpenMedia will argue to the Supreme Court that whenever there is an order that restricts access to content online, free expression requires particular attention from the Court, and that the Internet should be a protected medium of communication under Canada’s Charter of Rights and Freedoms.

In a nutshell: we’re intervening in this case to defend free expression online and the right of people everywhere to access information freely. We know (because you tell us every day) that the Internet is an essential tool for free expression for people across the globe. That’s why we’re fighting to establish the explicit protection of free expression online in one of the most influential courts in the world.

And the stakes couldn’t be higher, as the outcome of this case will be felt worldwide; it has the potential to set a precedent where we will see perfectly legal and legitimate links disappear off the web because of a court order in the opposite corner of the globe. Instead, we want to make sure that we all benefit from clear rules that ensure we can express ourselves freely and have essential access to information online.

We can’t stress enough the importance of this case – it was even recently highlighted by Beverley McLachlin, Chief Justice of the Supreme Court of Canada, as one of the most significant the court will be hearing this fall. The case has global implications because it is one of an increasing number of cases worldwide where web platforms are being asked to implement restrictions on expression online that reach far beyond the borders of the country where the case was heard.

What’s more, the online free expression legal framework we’re arguing to establish will set a new standard we hope will be looked to as a model when courts in other countries consider censoring content on the Internet.

If this case goes well, Canada will show leadership and set a positive example for other nations wrestling with these issues. But if this case goes badly, we could see a domino effect, where foreign governments and commercial entities justify censorship of search results – thereby restricting our access to information and harming free expression – by pointing to the precedent set in Canada.

We hope you’ll support us in our efforts. Legal work is expensive, often prohibitively so, and that’s why we’ve gone all in, committing to argue at the Supreme Court on behalf of thousands of Internet users just like you who can’t afford to be there yourselves. We know this is important, and we hope you’ll stand with us.

To find out more about OpenMedia’s intervention and the details of the case, visit our resource page. You can also read OpenMedia's Memorandum of Argument here.