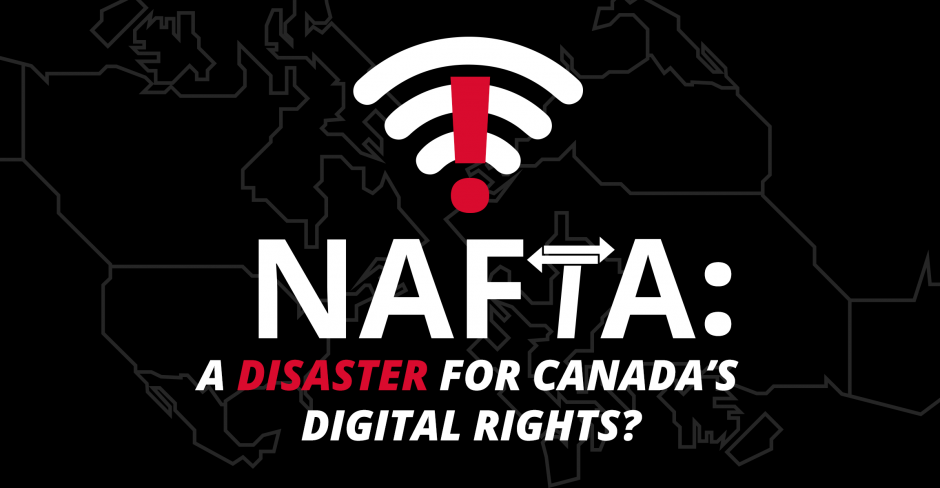 Monday’s announcement that the United States and Mexico had reached a tentative agreement on NAFTA has sent Canadian diplomats scrambling, and has digital rights advocates seriously concerned.

TL;DR: The new NAFTA agreement contains an Intellectual Property chapter that could trade away Canada’s digital rights by extending copyright terms and forcing an aggressive takedown system on Canadian ISPs. Send an email to Minister Freeland telling her our rights are worth standing up for.

Monday’s announcement that the United States and Mexico had reached a tentative agreement on NAFTA has sent Canadian diplomats scrambling, and has digital rights advocates seriously concerned.

Of the many new provisions in the agreement, the Intellectual Property (IP) chapter is drawing attention due to its dangerous new copyright rules. There’s now a threat that Canada will capitulate for fear of being left out of the new U.S.-Mexico deal entirely, and accept aggressive new IP rules that could cost our economy hundreds of millions of dollars and significantly restrict free expression online.

The Trump administration is piling on the pressure, issuing a deadline of Friday for Canada to sign on. Commerce Secretary Wilbur Ross says Trump is “fully prepared” to strike a deal without Canada, noting in a thinly-veiled threat that the Canadian economy “can’t survive very well” without the U.S.

While analysts are skeptical that Friday’s deadline is even possible, there are better reasons to avoid rushing into a deal prematurely. Namely, the nature of the deal itself: what we know so far is alarming, and raises even more concerns about what details still remain secret.

The proposed intellectual property provisions are a wishlist of U.S. media giants that have spent the last several decades seeking to extract maximum profits by pushing extreme new copyright rules around the globe. The deal includes radical “notice-and-takedown” provisions that would result in entire websites disappearing from the Internet without any court oversight, completely overwriting Canada’s nuanced and balanced “notice-and-notice” system.

Also on the table is a whopping 25-year extension to Canadian copyright terms. Experts including Canada Research Chair in Internet and E-commerce Law Michael Geist have warned that this provision alone would cost the Canadian economy hundreds of millions of dollars every year.

Similarly, Jim Balsillie, founder of Research in Motion, has repeatedly said that if Canada is serious about transitioning to a knowledge economy, it cannot roll over and accept aggressive intellectual property laws designed to assist big U.S. players in remaining dominant at the expense of Canadian innovators.

If all this sounds terribly familiar – it is. Many of the intellectual property provisions of the draft U.S.-Mexico deal appear to have been lifted wholesale from the Trans-Pacific Partnership (TPP), as OpenMedia warned might happen over a year ago.

Canadians fought back against these extreme copyright provisions throughout the TPP negotiations, with tens of thousands signing petitions, attending protests, and pressuring MPs to reject them. OpenMedia even produced a report summarizing Canadians’ views and recommending that future copyright rules be shaped by transparent, multi-stakeholder engagement – not highly secretive trade talks.

After years of Canadians raising concerns, our politicians finally listened, and our negotiators eventually stripped out many of the most damaging intellectual property proposals from the TPP. The final document, if still far from perfect, is markedly improved from a digital rights perspective.

But clearly, U.S. negotiators and the media corporations pushing these unfair rules just won’t take no for an answer. They’re trying to use the TPP’s high-pressure playbook all over again — the same U.S.-centric approach, the same secret negotiations, the same fait accompli being unveiled at seemingly the last minute with a ‘take it or leave it’ message.

The U.S. is transparently using high stakes negotiation tactics to push Canada into a deal that will hurt the middle class and working families, cost our economy hundreds of millions, and greatly restrict our freedom to express ourselves online. And we  can’t afford to let that happen.

However, there is still room for optimism. Canada already stood firm against  these bad proposals once in the TPP, and can do it again. We deserve balanced copyright rules that respect creators, prioritize free expression, and embrace democratic processes — and to decide this balance for ourselves, which after all is the promise of the government’s just-launched copyright review. If we sign up to the U.S.-Mexico deal, all this goes out the window.

Prime Minister Trudeau must  hold strong, and stick to his commitment not to be bullied. If we cave to Trump’s unfair deal today, we’ll regret it for generations.

Laura Tribe is executive director of OpenMedia, which works to keep the Internet open, affordable, and surveillance-free.