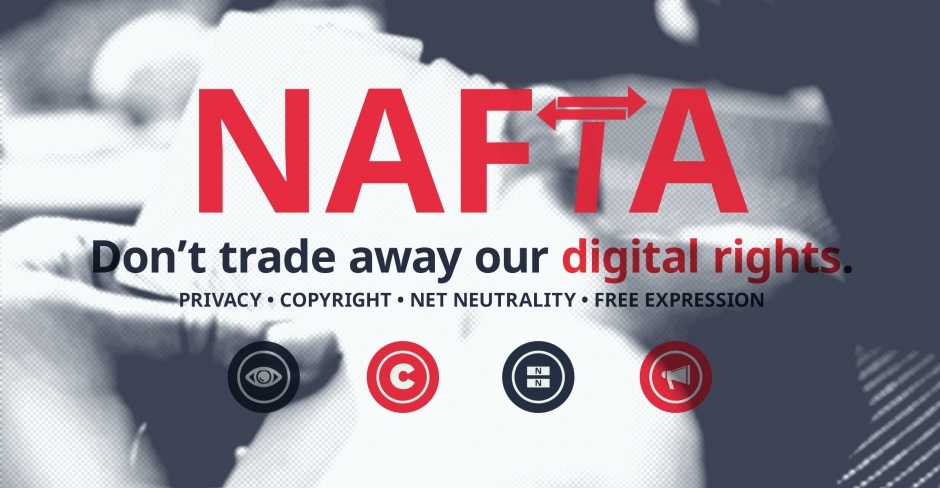 NAFTA: Our Digital Rights are not for sale (or trade)

Over the past few weeks, the Canadian government has been conducting a public consultation about the North American Free Trade Agreement (NAFTA), inviting citizens to provide input on what they see as the key concerns. We’re now only weeks away from the first official renegotiating round with the U.S. and Mexico to hammer out a new deal.

In the absence of Canadian negotiating objectives — Foreign Affairs Minister Chrystia Freeland has said it’s too early to “lay all [her] cards on the table now” — it’s hard to know what the government foresees as the areas where our negotiators see opportunities for growth, or what the challenges of a “modernized” NAFTA might be. But recent statements from the United States Trade Representative (USTR) give us a good idea of where the U.S. will be focussing a lot of its energies — on digital trade and the Internet economy.

USTR published its official negotiating objectives last week, and by all accounts intellectual property and ecommerce are top priorities for the Trump Administration. In promising to eliminate trade barriers, the brief explicitly highlights “burdensome restrictions of intellectual property.” It remains to be seen what the effects of this focus on IP and the digital economy will mean for digital rights here in Canada, as well as in Mexico and the U.S. As the Electronic Frontier Foundation notes:

Despite [the] release of the USTR's negotiating objectives for NAFTA, they are nowhere near detailed enough for us to know what rules the USTR will really be asking for from our partners. And that's dangerous, because we don't really know what we're fighting against, and whether our fears are justified or overblown. Worse, we might never know until the agreement is concluded—unless it is leaked in the meantime. That's just not acceptable, and it needs to change.

OpenMedia has raised concerns for the future of the digital rights of Canadians under NAFTA in our official submission to Global Affairs Canada’s consultation. You can read our full position paper below — but, in brief, here are a few of the key issues we’ve highlighted:

We’ll be paying close attention as we head into negotiations in August — working to ensure that our digital rights aren’t on the chopping block. It’s critical, not only for Canadians, but for all citizens and residents of our NAFTA partner nations, that we continue to foreground concerns about regulations that would fundamentally affect our free expression, privacy, and access to information online.

And thanks to the more than 8400 Canadians who have already responded to the consultations — your feedback is essential to this process.