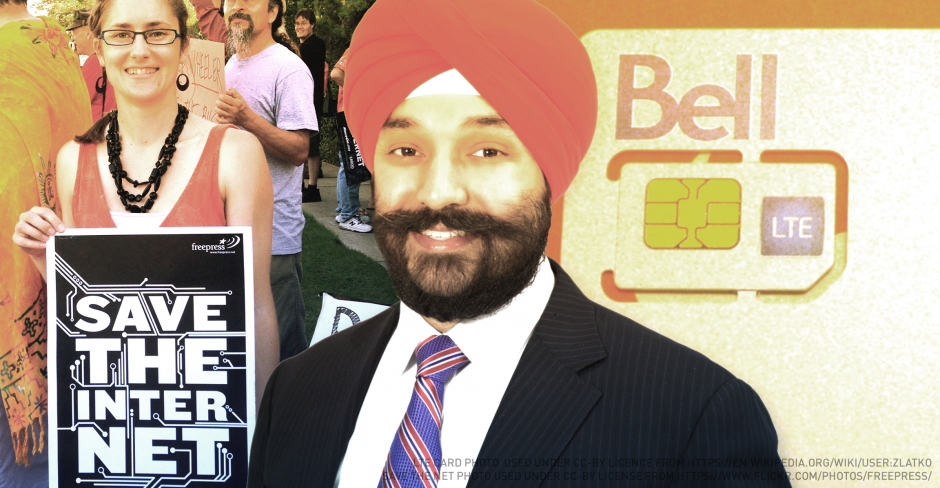 This morning, OpenMedia sent an open letter to the Minister of Innovation, Science and Economic Development, Navdeep Bains, urging him to listen to Canadians and reject Bell Canada’s recent appeal to Cabinet.

Today we sent an open letter (PDF) to the Minister of Innovation, Science, and Economic Development, Navdeep Bains, asking him to reject Bell’s request to overturn a landmark CRTC ruling that set out fair open access rules for smaller Internet providers to access fibre infrastructure. You can see the letter here or below.

We're also asking him to meet with us to talk about why the government should reject Bell's move, and to discuss fair rules to allow a range of new telecom startups to flourish in Canada.

As we’ve detailed extensively elsewhere, Bell is invoking an obscure, rarely-used parliamentary process to play politics with your Internet bill. If the telecom giant gets their way, present and future Canadians will have to pay the price for less Internet service choice in our already dysfunctional telecom market.

We outline many of the reasons we oppose Bell’s petition in the open letter below, which arrived in Minister Bains inbox early this morning. You can see the PDF here.

In the meantime, nearly 40,000 Canadians have spoken out through our Internet Emergency campaign, demanding the government reject Bell’s appeal.

The big question is: Will Minister Bains listen to Big Telecom giants like Bell? Or Canadians?

You can see the full letter here (PDF), or copy and pasted below.

In the Meantime, What Can You Do? First: Take Action

To secure a positive outcome, it’s imperative that we get as many Canadians as possible to speak out before a crucial December 21 deadline for public comments on Bell’s appeal. Add your name to the petition now, and we’ll make sure your voice goes on the public record.

Again: If haven’t signed the petition already, please join them here– or, if you have, spread the word on Facebook and Twitter.

Right now you’re probably asking yourself, what is a Thunderclap? It’s a new website that allows people to pledge to Tweet or Facebook a message all on the same day and at the exact same time, in order to achieve a maximum effect.

Click on this link and choose either Support on Twitter or Support with Facebook, or both!Add your name to the Thunderclap and on Dec. 19th everyone that has signed up will automatically post on Facebook and Twitter a link to our petition demanding the government to reject Bell’s underhanded, price-gouging scheme.

Third: Read our Letter to Minister Bains Below (PDF here):

Re: Bell Canada’s Petition to the Governor-in-Council on CRTC TRP 2015-326

We are writing on behalf of OpenMedia, a community-­based organization that works to keep the Internet open, affordable, and surveillance­-free. We work toward informed and participatory digital policy by engaging hundreds of thousands of people in protecting our online rights.

To start, we wanted to say congratulations on your appointment as Minister of Innovation, Science and Economic Development. Your Ministerial Mandate letter suggests bold action to tackle your predecessor’s legacy of half-measures in our telecommunications market.

There is much work to be done to increase the range of Internet services available, bring down costs, and increase broadband coverage across Canada. And we look forward to working with you to tackle these challenges together.

As we’re sure you already know, Canadians pay some of the highest prices in the industrialized world for what are widely recognized as sub-par wired and mobile Internet services. Report after report confirms that we are falling behind our international counterparts on the key metrics of speed, affordability, and adoption.

These shortcomings have arisen in large part because Canada’s telecommunications market is one of the most concentrated in the world. According to the federal government’s own reports, our large incumbent ISPs control 91% of the residential Internet market, while the Big Three wireless providers–Bell, Rogers, and Telus–control 90% of the mobile phone and Internet market. These figures underscore the urgent need to diversify the options available, so all Canadians can access the world-class, affordable services they deserve.

It is against this industry backdrop that we wish to convey to you our deep concern over Bell Canada’s recent request to Cabinet to overturn a landmark CRTC ruling that in July set out fair open access rules that would allow smaller, more affordable Internet providers to access ultra-high speed fibre infrastructure (Telecom Regulatory Policy CRTC 2015-326). This policy was celebrated by telecommunications experts, civil society organizations including ours, and, most importantly, by the over 25,000 Canadians who put their views on the public record in favour of these rules through an online campaign led by OpenMedia during the CRTC’s lengthy and comprehensive consultation over 2013 and 2014.

Nearly 40,000 Canadians have already endorsed OpenMedia’s Internet Emergency petition asking your government to reject Bell’s appeal at https://act.openmedia.org/emergency– and the number continues to climb. With a request to overturn the ruling coming within 48 hours of the federal election results, Bell’s efforts amount to little more than playing politics with the Internet bills of individual Canadians and small businesses.

Given that your government is committed to a policy agenda that will “increase high-speed broadband coverage and work to support competition, choice and availability of services,” then we believe your government cannot responsibly overturn this CRTC ruling. Doing so would be extremely harmful to the range of ISP choices available; would be unfair to the 25,000+ individual Canadians who spoke out in the CRTC’s consultation process; and would undercut your government’s own mandate.

Currently, fibre deployment in Canada is so low that it is available to only 5% of the population – just under half the U.S. rate and about one-quarter of the OECD average. Meanwhile, countries like Japan have soared ahead with nearly 70% fibre deployment, while Canada continues to fall behind our global counterparts because of a lack of competition among the major telecom providers.

OpenMedia believes our best shot at encouraging investment in high-speed Internet services is to ensure fair open access rules, like the very ones Bell is currently appealing. Granting Bell’s appeal at this point will spell the death of affordable Internet access for Canadian households and businesses.

For a clear example of what’s at stake, one need look no further than the broadband market for business. Businesses currently have significantly greater choice in the retail market than do Canadian households, and as a result, 25% of Canadian businesses rely on smaller, independent Internet service providers. But even in this market, Bell's appeal, if granted by your government, would put smaller operators at serious risk.

If these smaller providers don’t have fair access to Canada’s digital infrastructure, then Canadian businesses are going to suffer from a shortage of choice for affordable access. Worse still, this threat comes at a time when the Canadian Federation of Independent Businesses–which represents 109,000 small- and medium-sized businesses—has publicly told the CRTC its members have significant concerns over the cost and availability of high-speed Internet services.

We know Parliament has just resumed, and you were only appointed to your position a month ago. Nevertheless, given how critical this issue is to Canadians, we believe you now have the opportunity to make a positive, significant impact on Canada's dysfunctional telecommunications market. Here at OpenMedia, we’ve worked with over half-a-million Canadians to crowdsource a series of robust, common-sense rules that will help us work toward solutions that will make Canada more competitive globally, and that are free of roadblocks for new telecom startups. Canadians have some great ideas, and we’d love to share them with you.

OpenMedia, along with other public interest organizations, plans to offer detailed comments in response to Bell’s petition in advance of the December 21 filing deadline. While we’re certain your government will be reviewing all comments closely, we would like to extend to you an invitation to sit down with our team directly, and hear the concerns of the many Canadians who are deeply concerned about Bell’s petition.

We would greatly appreciate the opportunity to meet with you in the coming weeks so that we can discuss with you and your officials effective ways that we can work together to remedy the dysfunctions of our national telecommunications market.

We hope to speak with you soon.