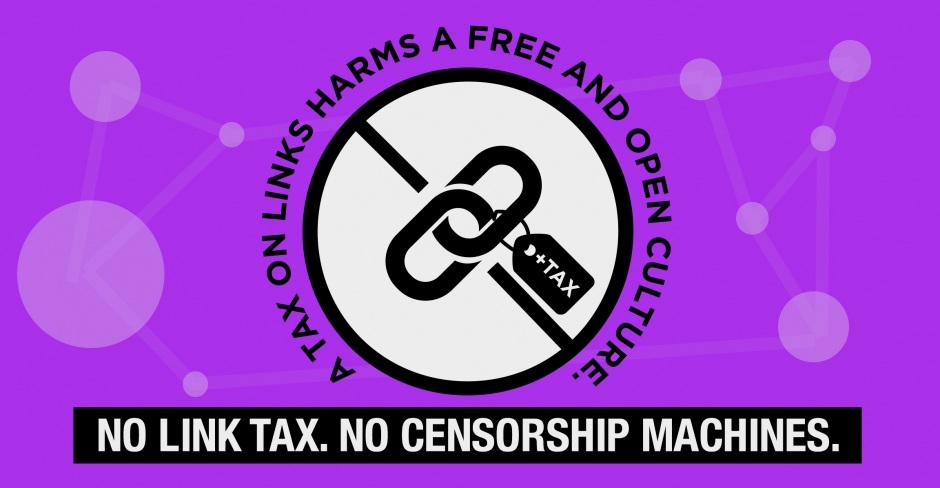 Implementing the Link Tax in the worst way possible

After the mid-September vote, when Parliament approved both the Link Tax and copyright upload filters, the finish line for the problematic legislation is in sight.

Trouble in the land of European copyright reform continues. After the mid-September vote, when Parliament approved both the Link Tax and copyright upload filters, the finish line for the problematic legislation is in sight.

The proposed updates to the copyright directive are now in a phase of the process known as the Trilogue, where the European Parliament and the European Council work to find a compromise on proposed legislation. On the issue of the Link Tax, the two are not far apart, with both the Council and the Parliament proposing slightly different yet comparably terrible versions, with the Council suggesting the marginally less damaging incarnation. For example, where the Council suggests member states are mandated to provide the same exceptions and limitations for the Link Tax as those set out for copyright, the Parliament would prefer to leave that optional. Apart from a few other small differences, which are helpfully laid out in this blog from MEP Julia Reda, the troubling proposals are nearly identical.

While it may be unlikely that any radical changes will be made to improve the Link Tax at this point, there is one outstanding item that’s worth noting, and could still be salvaged: whether or not news publishers will retain the ability to offer free licences.

The Link Tax has already been tried – and failed – in previous experiments. In Germany, where the policy was first implemented, many of the press publishers chose to give free licenses to search engines or aggregators like Google News – essentially opting out of the Link Tax, even though it was supposedly to benefit them. The logic behind their decision to opt-out was that it was better to have the traffic driven to their sites through these widely-used aggregator services, than not at all. Without their free licences, there was a risk that companies may simply choose not to index or link to them, resulting in a substantial loss of traffic and revenue.

When the Link Tax was later implemented in Spain, it went even worse. The Link Tax provision was adjusted to prohibit the ability to grant free licenses – essentially meaning that publishers had no ability to opt out of a Link Tax. As a result, the decision ultimately saw the complete shut down of Google News in the country, with a disastrous result for Spanish news companies. One study showed a 14 per cent decrease in traffic and loss of €10 million in revenue. These losses fell disproportionately on smaller publishers, despite the fact their viability was claimed to be one of the reasons for implementing the policy in the first place.

With experience on their side, one would have hoped that European policymakers would be doing everything possible to avoid recreating these adverse outcomes for Europe’s news outlets. Incredibly, however, what is being proposed in the Trilogue is a version of the Link Tax that looks more like what was implemented in Spain than in Germany – the worst version possible.

In the most recent version of the Copyright Directive, an amendment to Recital 32 reads as follows:

(32) The organisational and financial contribution of publishers in producing press publications needs to be recognised and further encouraged to ensure the sustainability of the publishing industry and thereby to guarantee the availability of reliable information. It is therefore necessary for Member States to provide at Union level legal protection for press publications in the Union for digital uses. Such protection should be effectively guaranteed through the introduction, in Union law, of rights related to copyright for the reproduction and making available to the public of press publications in respect of digital uses in order to obtain fair and proportionate remuneration for such uses. Private uses should be excluded from this reference. In addition, the listing in a search engine should not be considered as fair and proportionate remuneration.

The bolded amendment essentially prevents press publishers from choosing to be listed in search results as a compensation for the license. Quite simply, it would outlaw the “free license” that many German companies offered when the Link Tax was tested there, meaning it’s a Link Tax or bust for European publishers.

Forcing news creators to use this system is deeply problematic. Not only will it more than likely lead to less content distribution, less traffic, and a loss in revenue, as was clearly demonstrated in Spain. But it’s also counter-intuitive, as publishers are demonstrably getting value out of being linked to by search engines – it’s a huge source of traffic. A coalition of small and medium-sized publishers from across Europe are already raising concerns that the expanded Link Tax would amount to “limiting publishers’ freedom” and specifically point to the harmful amendment, saying “any publisher’s right must give publishers the choice to consent to the sharing of their content online.”

Policymakers seem to think that they can simply will and legislate money into journalism, without understanding how the Internet works, or the damaging impact these decisions will make. Hyperlinking, aggregating, and previewing content are aspects that make the Internet easier to navigate, and people more likely to discover new and amazing content; not services to be charged for.

This is not the way to save journalism. But it is a sure-fire way to limit the freedom of publishers, and entrench big corporate interests; the only ones who can afford to survive in the Link Tax’s pay-to-play world.

The final vote on the European Copyright Directive is expected to take place in January 2019.