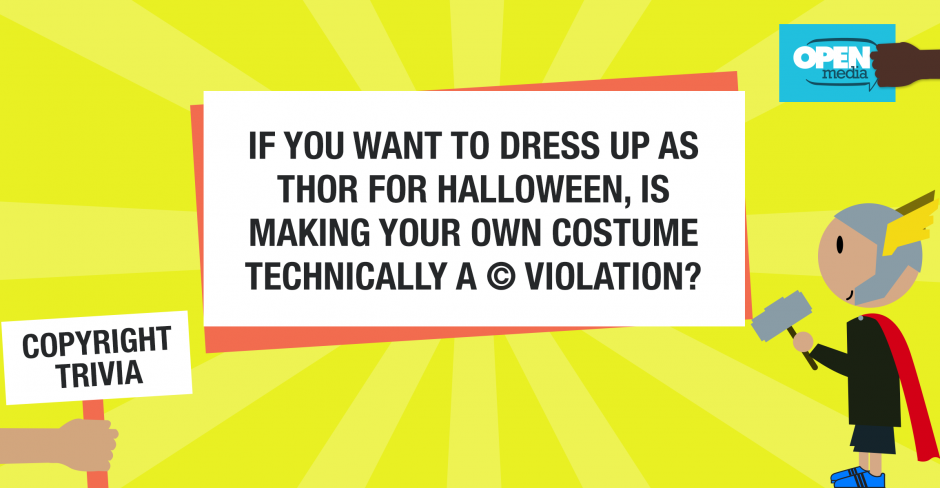 If you want to dress up as Thor for Halloween, is making your own costume a copyright violation?

Do you think you'd be slapped with a copyright violation notice if you were to reproduce one of these characters' likeness for your Halloween costume? Let's explore this copyright curiosity.

This article by our Marianela Ramos Capelo was originally published by Rabble magazine.

Halloween is almost upon us and, like every year, people from all ages are gearing up to dress up as their favourite thing or character. While there are some classics -- ghosts, vampires, witches, and punny ones like "cereal" killers -- a lot of us draw directly from popular culture, and that means drawing directly from copyrighted characters. Just as a curiosity: do you think you'd be slapped with a copyright violation notice if you were to reproduce one of these characters' likeness?

In Canada, costume designs are considered to be under copyright. So, mass-producing a costume of Marvel's Thor, for example, without clearing the rights to use the character might not be the best idea. The Copyright Act does contain copyright exceptions for articles that have a "utilitarian function," like clothing -- but there are elements in a costume that might go beyond the clothing function, like Thor's hammer.

The key part here is that, if you are making the costume for your own personal use, you should be OK, as you would likely fall under the "reproduction for private purposes" exception of the Copyright Act. The cases mentioned above infringed copyright laws likely due to the fact that these companies were manufacturing costumes to sell to others without having the rights to reproduce the likeness of the characters -- which is a different case from the DIY Halloween garbs we are talking about here.

So, again, crafting your own costume -- even if it is emulating a copyrighted character -- is protected by the Copyright Act. And this might sound obvious, but it is one of those provisions we take for granted, and the law can change at any time. In fact, right now the government of Canada is running a consultation to decide on the future of copyright -- and lobbyists are all too eager to tip the rules in their favour. Let's not take the exceptions that allow us to create and craft away for granted. Canada has some of the strongest and more progressive copyright laws in the world, so let's make sure we keep them that way. You can have your say at: LetsTalkCopyright.ca And in the meantime, craft away!

A special thank you to the folks at CIPPIC for reviewing this article and providing their expertise on the accuracy of the legal side of copyright trivia.