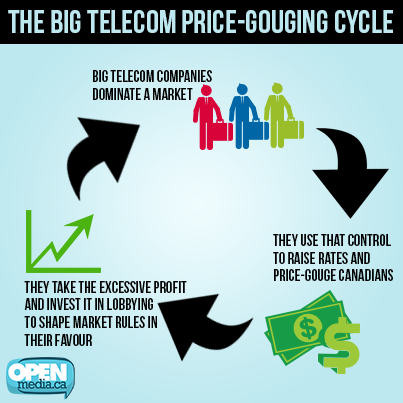 Guest Blog: Prepaid mobile phone users deserve the same protections as the rest of us

Our small team at OpenMedia can’t fight every battle we’d like to. One of these battles is being waged through the tireless efforts of Diversity Canada, and their Executive Director Celia Sankar, who joins us today for a guest blog on how the CRTC refuses to apply the protections in the wireless code of conduct – which Canadians fought for together and won – to prepaid mobile phone services. Essentially, Celia and Diversity Canada are appealing a CRTC decision that allows any of the over 3.7 million customers who use prepaid mobile phone services in this country to be forced into a more expensive monthly plan against their will by Big Telecom giants. Users of prepaid services often includes travellers, senior citizens, low-income Canadians, or anyone who can’t afford what are some of the most expensive mobile phone plans in the industrialized world. At the heart of the issue is whether prepaid mobile phone subscribers should receive the same protections that people on 1 or 2 year contracts receive. Diversity Canada thinks the answer should be “Yes!”, but they need your help to make the case. You can get all the essential details below in a guest blog from Celia, and then let the CRTC know where you stand by sending them a comment through their online web portal here before the deadline on September 17.

Wireless providers must get consumers' consent to change terms

Consumer groups, this week, pointed out a major flaw in the Wireless Code, which fails to protect fundamental rights of 3.7 million wireless consumers.

The Code, which was introduced in 2013 to ensure that wireless services agreements were both clear and fair, invalidly omits consumers who prepay for wireless services from a key protection, the DiversityCanada Foundation and the National Pensioners Federation said in an application filed this week (August 18, 2015).

In the submission to the CRTC (Canadian Radio-television and Telecommunications Commission) our organizations noted that a section of the Code affirms the basic contract principle that a party who wishes to make a change to an agreement must first obtain the other party's consent.

There is no simply justification for this unequal treatment.

While prepaid customers do not sign a contract, the phone company's “terms of service” are considered by the courts to be a legally binding contract for prepaid wireless services.

“Regardless of the length of their contracts with carriers, all consumers are entitled to fundamental contractual rights,” our filing this week with the CRTC states. “DiversityCanada/NPF therefore submit that every individual who has a contract with a wireless services provider is entitled to protection from material changes to that contract for the duration of that contract – whether it be 30 days, 60 days, 365 days, two years, or indefinitely.”

In short, if you prepay for wireless services and Bell, Rogers, Telus or any other wireless provider tells you that your prepaid wireless services are for 30 days, 60 days, 356 days or indefinitely, they can't make major changes to the way they said they would let you use those service during those 30 days, 60 days, etc (with the exception of the rates, which are usually subject to change without notice).

The issue is at the heart of our application which asks the telecom watchdog to reverse a decision from May of this year that sanctioned a Telus policy which introduced mandatory changes to key terms of its prepaid wireless agreements.

DiversityCanada/NPF have called on the CRTC to review and vary a ruling in which it gave its blessings to a Telus policy that required prepaid wireless, pay-per-use consumers with a balance of over $300 to acquire monthly plans. (See the full application here. LINK: http://bgomb.com/pdfs/TelusRandV.pdf )

Our organizations argue that Telus cannot unilaterally change service agreements by simply stating it's now mandatory that consumers make such a switch. Fundamental contract principles require Telus to ask consumers for their consent to make such a radical change to their agreements for prepaid wireless services.

(Prepaid pay-per-use payment arrangements are distinct from prepaid monthly plans. In the former, consumers give the phone company funds in advance that are recorded as a balance in their accounts. Consumers draw on the balance to pay for wireless services “as and when” they make calls, send text messages, etc.

By contrast, with monthly plans, the phone company offers a suite of services at a set price to be used within 30 days – eg, 100 minutes of local calls and 100 text messages for $15. Consumers pay the full $15 upfront, even if they don't eventually make the allotted number of calls or send the maximum number of texts.)

The matter before the CRTC affects not only Telus customers with a balance of over $300, but seeks to protect the rights of the 3.7 million consumers who have prepaid wireless services agreements with all Canadian carriers.

As a consumer, you can play a part to ensure that phone companies respect their agreements with all consumers.

Please tell the CRTC to make it clear to Telus and all other wireless services providers that they must not change key terms of their agreements with prepaid wireless consumers during the contract period, whatever that length may be.

You have until September 17 to submit your comments in support of this application. To make your comment, please click here.

Celia Sankar is the Executive Director of the DiversityCanada Foundation.