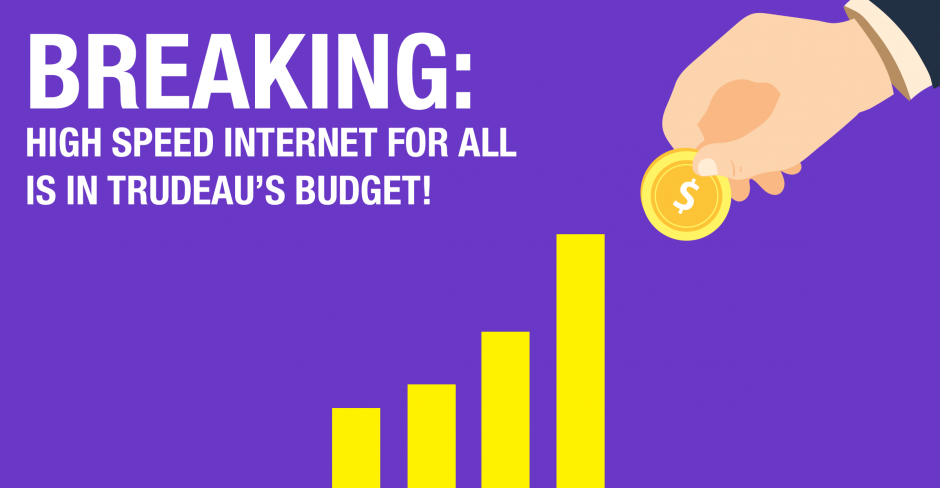 The new coordinated broadband fund is a critical commitment from the government, but missing details on the implementation of the plan leave doubt as to how far this promise will go.

Today the Canadian government tabled the 2019 federal budget, which includes a connectivity goal of bringing everyone in Canada online with high-speed Internet by 2030. While a much-needed target, the funding structure for this initiative leaves many questions remaining about the implementation and how the government will be held accountable to ensure these goals are met.

Today’s announcement promises $1.7 billion in new investment over the next 13 years, to support renewing the government’s Connect to Innovate program, and develop a new Universal Broadband Fund. When added to potential investments of $1 billion from the Infrastructure Bank, $2 billion in private sector investment, and the CRTC’s $750 million Broadband Fund, the government is collectively looking to bring approximately $5 or $6 billion investment to Canada’s national broadband infrastructure.

Today’s announcement of a clear deadline for high-speed connectivity is a significant step forward in ensuring we can hold the government accountable for making this a reality. But without clear guarantees of how the remainder of the funds needed will be secured or allocated, a lot of questions remain on how this project will be implemented.

We absolutely need a national target, and it’s great to see clear guidelines for what we’re working towards. But for those throughout Canada struggling to get online right now, being told to wait 11 years may not seem very comforting. Will the speed targets set by the CRTC in 2016 even hold up in 2030? And even more critically –  will they be affordable? Right now we have an ambitious target, but not a lot of details or guarantees.

Over 10,000 people across Canada have called on the federal government for a national broadband strategy at: https://act.openmedia.org/broadband-plan

Business vector created by freepik and modified by OpenMedia