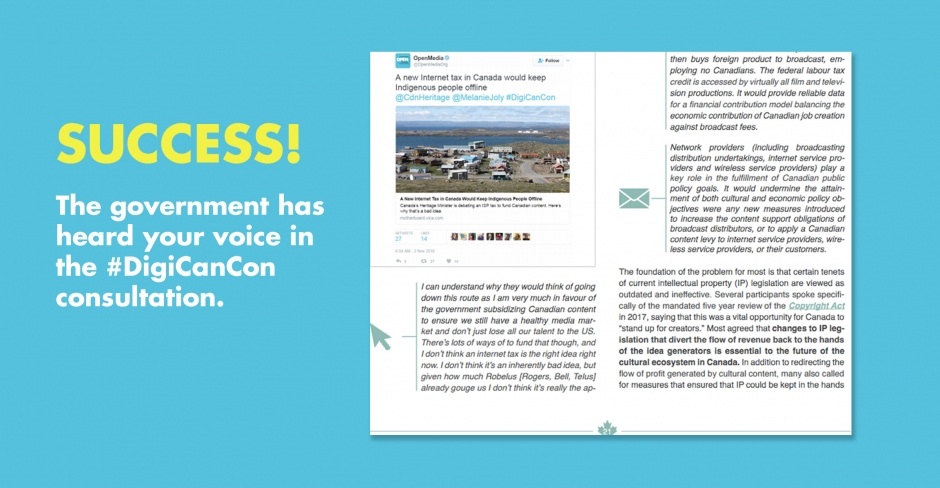 Results from the federal government’s #DigiCanCon consultation are here -- and they show that Canadians view affordable Internet access as essential to support Canadian content in the 21st century. A 52-page summary by Ipsos Public Affairs notes that “Enable access to high speed broadband Internet for all Canadians” was one of the key messages citizens sent the government during the consultation. This aligns with a recent CRTC decision making Internet a basic service for all Canadians.

The summary reflected strong opposition to proposals that would raise the cost of Internet access, with many participants emphasizing that Internet costs are already excessive. A number of groups representing content producers have been pressuring the government to introduce an Internet Tax to fund Canadian content. However a recent Innovative Research Group poll revealed that while Canadians support Canadian content, 70% oppose an Internet Tax.

#DigiCanCon should be commended for clearly reflecting the concerns of a wide range of stakeholders, including the OpenMedia community - thanks to all of you who participated!

On the whole, this report shows that Canadians support Canadian content and want to find ways to fund its creation. It’s clear from these findings that affordability is a top priority of Canadians and creators who are having difficulty getting online. That’s why the government should firmly rule out an Internet Tax and turn its attention to the positive alternatives.

Among the comments and key points highlighted by today’s report are:

Today’s report also comes on the heels of the government's recent approval of Bell's takeover of Manitoba Telecom Services (MTS), which experts and industry analysts agree will lead to higher wireless prices. We believe that to lower prices the government needs to fix our wireless market by ensuring smaller providers can access networks owned by the Big Three. With the federal government allowing Xplornet to access Bell’s networks in Manitoba, it's time to expand that ‘Mobile Virtual Network Operator’ model across the country. (Stay tuned for much more on this in the coming weeks!)

Last but not least, our petition calling on government to reject an Internet Tax has now received over 36,000 signatures, with more signing on every day. It's really inspiring to see the impact that your voices are having -- let's keep up the momentum to ensure affordable, high-speed Internet becomes a reality for all Canadians.