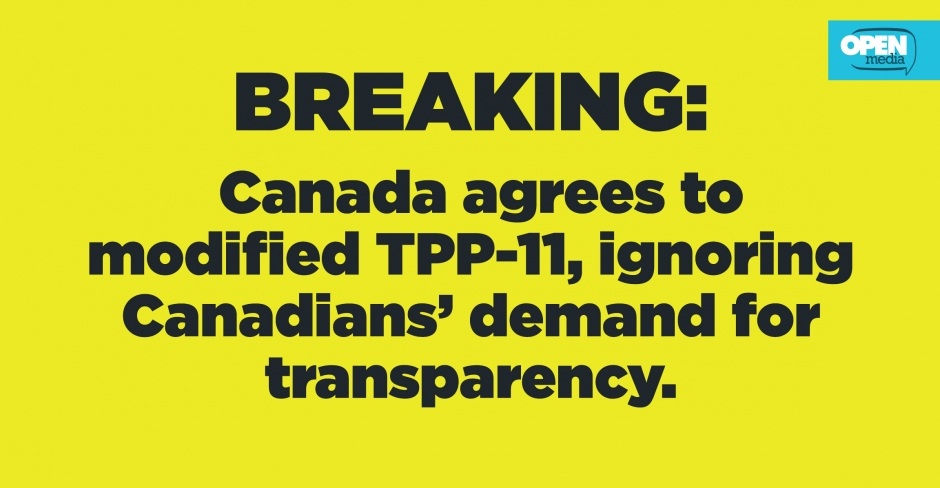 Canada agrees to modified version of the Trans-Pacific Partnership without the U.S.

The government’s decision demonstrates a blatant disregard for the voices of Canadians, coming only days after the national consultation on TPP closed.

In advance of today’s agreement, the Canadian government ran a consultation on the modified TPP, which closed on October 30. Over 11,000 members of OpenMedia’s community participated in the consultation, calling for the deal to be scrapped for reasons including its negative impact on the future of our Internet, and the opaque, secretive negotiations that created the deal in the first place. Unfortunately, less than two weeks later, the government has rushed into a deal that does not put the needs of Canadians first and ignores the voices of its citizens.

Agreeing to the TPP within two weeks of closing its own consultation process confirms that this government is more interested in photo ops and magazine covers than actual democratic governance. This is remarkably disrespectful to the thousands of citizens who took the time to provide their input and share their concerns, making the consultation nothing more than an exercise in public relations, and a waste of taxpayer dollars and participants’ time.

Today’s decision is a major blow to the free and open Internet, and is a troubling act from a government that has claimed commitment to “progressive” trade and said it wouldn't rush into the agreement just two days ago. A secretive and undemocratic process that overlooks the needs of its citizens does not fit with a so-called progressive framework. The lack of transparency surrounding the TPP negotiations is fostering a culture of mistrust that’s eroding our confidence in public institutions.

The original TPP involved years of secretive negotiations, and its controversial provisions led to to massive opposition worldwide. Although some of the controversial provisions championed by the U.S. have been frozen in this agreement, these could be revived should the U.S. decide to rejoin in the future. Just like its predecessor, the CPTPP was negotiated in secret, and is a bad deal for Canadians.

Today’s deal sets a disastrous precedent for how Canada negotiates its trade agreements, including NAFTA. We cannot let a backdoor deal negotiated with negligible citizen input become the basis for our trade relationships with Asia-Pacific countries, or our future trade negotiations with our international counterparts.

In response to today’s developments, OpenMedia is fundraising to put up transit shelter ads (see ad mockup copy below) around Parliament Hill and downtown Ottawa to ensure the government knows this is an undemocratic move and that Canadians will not be silenced. People can donate at: https://act.openmedia.org/trudeauTPP/donate 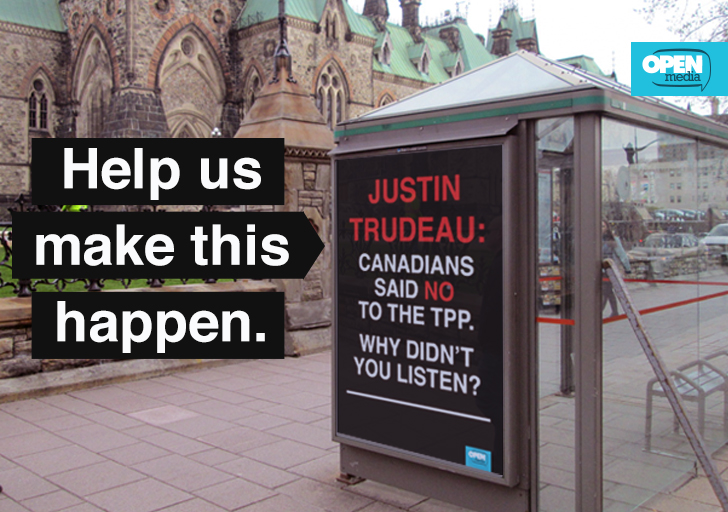 Canadians can also join the fight against the TPP and demand a transparent and democratic trade process at: act.openmedia.org/killtheTPP