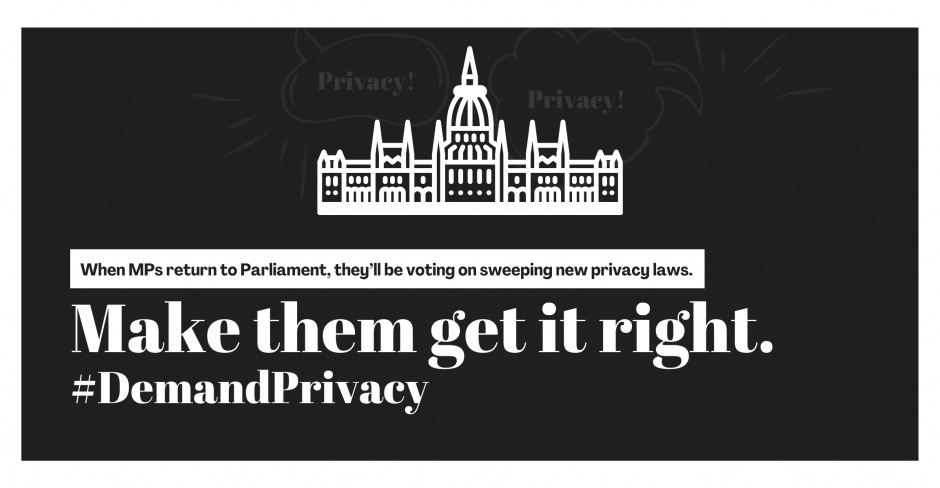 This week, we delivered more than 11K signatures calling for Prime Minister Justin Trudeau to create strong privacy protections for people in Canada, and nearly 6K messages have been sent!

The reviews for Bill C-27 are in, and nobody in academia or civil society thinks it will improve privacy protections for Canadians. In fact, the proposed privacy law fails to effectively recognize privacy as a fundamental human right, and creates more ways that companies can exploit our personal information for their profit without our knowledge and consent.

This doesn’t come as a big surprise, considering the heavy lobbying record of the Minister responsible for the legislation, who has been meeting with a whole host of industry groups, including one unholy alliance composed of of Bell, Rogers, Telus, the Royal Bank of Canada, Sunlife and Manulife Financial, Canadian Tire, and a predatory lender called goeasy.

People in Canada deserve modern privacy protections that put their rights above those of companies who are looking to exploit their personal information for profit. This is something that Minister Champagne, who is responsible for Bill C-27, absolutely fails to understand. In fact, he’s been invited to boast about all the ways that his proposed legislation will allow companies to abuse our personal information in his keynote address at the Canadian Marketing Association’s annual conference.

But while companies have to spend lavishly to lobby Minister Champagne to weaken our privacy protections, we can easily send messages to our MPs asking for important amendments to Bill C-27.

Minister Champagne has heard from all the lobbyists. Let’s make sure the voices of the OpenMedia community are heard, too.