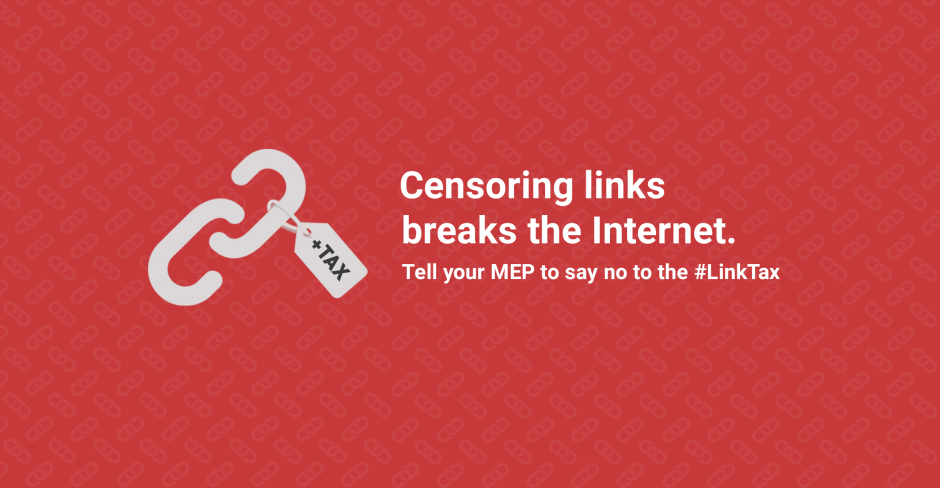 The building block of the web must be defended

Big new media companies admit they are still coming for hyperlinks, despite the evidence that it will harm rather than save the news sector.

The reason we are working on Save the Link is right there on the home page. It’s the line that over 100 groups signed up to:

"Linking is the foundation of the Web. We oppose regulations that aim to censor links to content or otherwise penalize services that utilize hyperlinks."

The importance of the link, as that building block, the piece that ties the web together, that makes pages function must not be forgotten.

It was why we leapt up when big media corporations started talking about applying a copyright to links in the first proposals for the controversial Copyright in the Digital Single Market Directive.

After our powerful fight back with a huge community of over 130,000 people, the proponents of the link tax changed their messaging and focused instead on the snippets of text that come with links - something we knew would still affect access to information, and the sharing of news.

However, in a piece in French paper La Monde today we saw that links themselves are still the targets of these major news agencies, describing the sharing of links by search engines:

“They offer internet users the work done by others, the news media, by freely publishing hypertext links to their stories. […] Solutions must be found. […] We strongly urge our governments, the European parliament and the commission to proceed with this directive.”

These major press groups’ leaders have co-signed this substantial piece calling for MEPs to endorse the Directive, link tax and all.

They focus in on the argument about platform dominance. Google and Facebook make huge amounts of money from the sharing of news, scooping up the advertising revenue and not feeding that back to traditional media.

That “Google Amazon Facebook Apple” goliaths have power is without doubt - we’ve fought back against their powers before. However, this law doesn’t target them. It doesn’t name them. It is in an indiscriminate broad brush that attacks link sharing overall.

The CEOs that authored the Le Monde piece seem to be willing to push the smaller players, small news sites, small aggregators, under the bus in pursuit of targeting these big platforms.

It’s a battle between media giants and internet giants, with neither looking at who is under their feet.

We agree that quality journalism and investigative research needs to be funded. We rely on it in our work to save the web. However, we cannot agree that expanding copyright law, which is already so far-reaching, is going to fix those problems.

It has only been a couple of weeks since the European Parliament was presented with its internal think-tank’s report on the link tax. This report made several key points about how these proposals were considered in the countries where they already exist:

This reaction from those working in the press, on the ground, should not be sidelined in this debate.

The substantial evidence is that restrictions on links will harm media plurality, and harm a fully functioning web.

The recommendation of this report, and of multiple EU committees has been to grant these publishers powers to enforce their existing copyright, but not to grant them these link tax powers.

These kinds of major pushes from top CEOs for this restrictive law have a huge influence with MEPs. It’s important that your voice, and the voice of human rights is not lost in this debate.

Please take the time to call your MEP and tell them how you stand on this. There is still time to influence them, to vote for you and against these Internet censorship proposals.