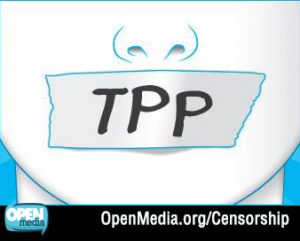 Over 125,000 people - including tens of thousands of Canadians - have now spoken out about the damaging Internet censorship proposals in the Trans-Pacific Partnership (TPP). We know from leaked drafts all about how the TPP would make your Internet more expensive, censored, and policed. Now, our friends in Australia are sounding the alarm about how the TPP could wreak havoc on Canada’s economy. Australians know well the economic damage that unbalanced and extreme Internet censorship rules can cause. Australia was forced to adopt extreme copyright rules as part of the Australia-U.S. Free Trade Agreement (AUSFTA) - rules which caused over $80 million dollars worth of damage to the Australian economy.

Here’s what Australian experts are telling Canadians about their experience:

“‘A net loss’ is how the Productivity Commission labelled the copyright obligations,” wrote Trish Hepworth, Executive Director at the Australian Digital Alliance. “The copyright extension alone was estimated to cost up to $88 million per year in revenue flowing overseas.”

The U.S. is trying to force Canada and the other TPP countries to agree to extended copyright terms, along with many other economically damaging Internet censorship measures in the TPP.

Trish Hepworth went on to warn, in a hard-hitting article about the likely economic fallout of the TPP, that: “Provisions in the TPP have the potential to bring the Internet to a grinding halt, through the extension of reproduction rights into the digital context. Australia is now an unattractive place to locate facilities that deliver, in particular, data analysis and search services over the internet. Telcos and universities are concerned that cloud computing isn’t supported, putting Australia in a technological backwater.”

Hepworth also warns that: “Alarmingly, the TPP proposals... go further than those of AUSTFA. The increasing move towards criminalisation, provisions on ISP liability, formalities and parallel imports could all have long-lasting consequences for Australia and other countries. A secretly negotiated trade deal is not the right place for overly controlling and technical copyright provisions. Australia’s experience under AUSTFA should stand as a warning to other countries considering their position in the TPP.”

This stark warning from Down Under ties in with what other international experts have been telling Canadians about the TPP. Carolina Rossini, who’s a leading expert on Internet governance with the New America Foundation, recently told a Vancouver audience that: “The U.S. government is trying to force Canada into adopting economically damaging Internet censorship rules for the benefit of American media conglomerates. Canada has proven to the world that a balanced copyright law that guarantees Internet freedoms, shaped with society's input, can be achieved. And now the TPP puts that at risk.”

Experts here in Canada are speaking out too. The University of Ottawa’s Professor Michael Geist has explained on his website how the TPP’s Internet censorship chapter would make the Internet more expensive by forcing ISPs to act as Internet cops, the costs of which would be passed on to users. Professor Geist also highlighted how the TPP would block Canadians from public domain access to the works of important Canadian authors, including Marshall McLuhan, Gabrielle Roy, Donald Creighton, and Glenn Gould.

Thanks to you, TPP talks are currently stalled - citizen pressure put paid to U.S. hopes of bullying smaller nations into signing up to their extreme plan in 2013. Negotiations are set to resume in mid-January, with a number of countries standing firm against intense U.S. pressure.

With so many experts speaking out, isn’t it time Canada’s government listened? With recent leaks revealing the full scope of what U.S. lobbyists are trying to force other nations to adopt, it’s time our government gave a firm public commitment that they will not sign up to damaging Internet censorship rules in the TPP.

Your OpenMedia.ca team will be working hard in 2014 to build a positive alternative to the TPP’s Internet censorship. We’ll be pushing forward our own, crowd-sourced, positive plan for a fair digital future - a plan shaped by you, our community. Be sure to have your say by taking part in our easy-to-use drag-and-drop crowdsourcing tool at https://OpenMedia.org/crowdsource