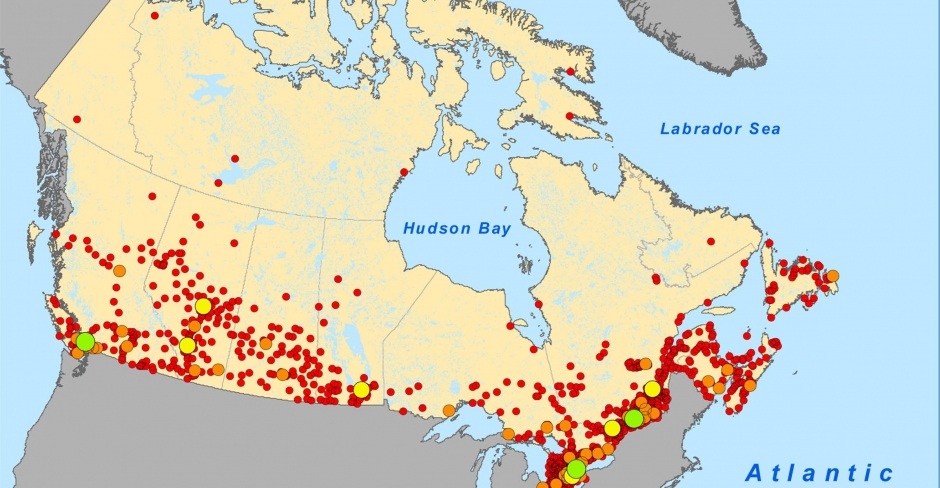 Big Telecom likes to claim that our sky-high wireless bills are because Canada's really big. That couldn't be further from the truth.

Canada’s broken cell phone market has come under a lot of public scrutiny of late, with the Canadian Radio-television and Telecommunications Commission trying to establish a set of minimum standards for wireless providers; the release of OpenMedia.ca’s citizen-powered report, Time For An Upgrade, which demonstrated the systematic mistreatment that cell phone users suffer due to this dysfunctional market; and Industry Canada minister Christian Paradis coming under pressure this week over Big Telecom’s bid to take over scarce wireless resources meant for new independent providers.

In the face of all this critical opposition, Big Telecom has been unwavering in their defense of their practices, insisting that there is no problem with three providers—Bell, Telus, and Rogers—controlling almost 94 per cent of the cell phone market. A common straw man that Big Telecom uses to justify high prices is that Canada is just bigger than other countries, which we are led to believe somehow necessitates more costly services. The truth is, it’s the lack of fair access to independent providers that is the primary driver of high prices.

More specifically, Big Telecom lobbyists assert that: 1. Because Canada is a big country it requires a bigger (and more expensive) digital infrastructure, and 2. Because Canada’s population is so spread out across the country (it has a low ‘population density’), fewer people condensed in an area means fewer customers to cover the cost of that infrastructure.

While these claims seem logical, on closer inspection they don’t hold water, suggesting that population density is a convenient but flawed excuse used by Big Telecom to allow them to keep price gouging Canadians.

There is little doubt that large countries are expensive to service. However research from technology consultants The Seaboard Group argues that “Canada’s carriers do not actually provide coverage across 90 per cent of the land mass” and that “[s]ome estimates suggest that the coverage is actually less than 20 per cent of the geography.” As wireless providers are only serving a percentage of this geography, in reality the total size of Canada will have little bearing on service costs.

The fact is that while Canada is a large country, its population is largely condensed in the south. We have a large land mass and relatively small population, but we have extremely high urban density. Not only this, but a very large proportion of our population is settled in a very small number of large cities. Statistics Canada reports that in 2011 over 53 per cent of Canadians lived in the top 10 biggest metropolitan areas in Canada.

Big Telecom’s own lobbyist group, The Canadian Wireless Telecommunications Association, explains that more dense populations (for example in cities) require a larger and more robust network, as it needs to be able to support more people, but these are also the spaces in which it is most cost effective to build. This means that the areas with the greatest network need are also the spaces that are cheapest to service, and house the majority of Canadians

So what we have here is not a ‘coverage’ issue but a ‘cost’ issue. Canada’s urban density means that all provinces have close to a 100 per cent wireless coverage rate (with the significant exception of the Northern Territories). Despite this, only around 70 in every 100 Canadians own cell phones. In fact, according to the Organisation for Economic Co-operation and Development, regardless of size or population density, other countries are so connected that not only do most people have cell phones, but they have more than one. When compared to these other countries, Canada ranks dead last.

The coverage is available in Canada, so why aren’t more people connecting? Because the service prices are so high. As award-winning journalist Peter Nowak points out, “[e]ven with multiple SIMs factored in, it still costs more to own just one phone in Canada than it does to own several in other countries".

Perhaps high prices are being used to cover the cost of network upgrades? In 2008 Telus and Bell teamed up to create a shared network, which only cost each provider $500M. This is a great example of how network sharing can reduce costs. Indeed, Telus has trumpeted about their successfully lowered expenditures through this cost-reducing network, but these savings don’t seem to have been passed on to customers.

So if our high service prices don’t seem to be covering the costs of the network, where is all the money going? As Michael Geist recently noted, a report from Scotia Capital (ironically, the report that Big Telecom has been using to argue that the Canadian cell phone market is healthy) illustrates the high revenue that cell phone providers extract from customers—higher in fact than any other country, making Canada the most ‘carrier-friendly’ market in the world.

These findings are supported by the CRTC’s Communications Monitoring Report 2012 which shows that, despite new entrants into the cell phone market, the incumbent providers still enjoy the highest revenue per user in the world. This suggests that a lack of options in a market that is tilted towards the incumbents is the real cause of high cell phone prices.

It doesn't make sense for Big Telecom to argue that our prices are lower than elsewhere on the one hand, and then justify higher prices because of the vastness of our country. In reality our geography is not a decisive factor in pricing, and yet we are paying high prices. This is a clear illustration that the market is dysfunctional and not based on the real costs of providing services.

In order to ensure that Canadians have access to fair prices, policymakers need to address the structural problems in the market. It is past time for bold action to create a level playing field that enables independent cell phone companies to provide effective alternatives to the big three cell phone giants that currently have a stranglehold over the telecom market, our digital economy and our wallets. Big Telecom’s excuses are wearing thin; demand choice in Canada’s cell phone market today.