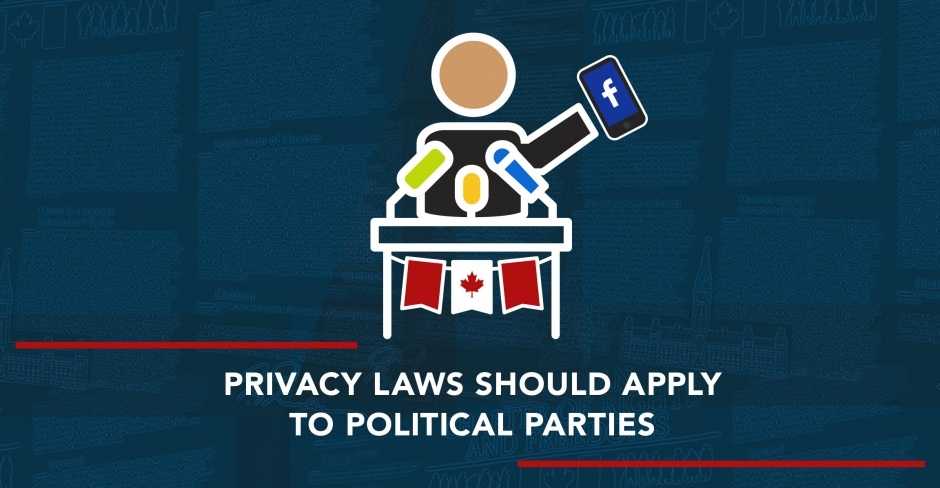 Why are political parties refusing to comply with Canadian privacy laws?

Why are Canada's political parties exempt from following federal privacy law just like any other business? It is not entirely clear, but the public is demanding immediate action.

This piece  by our Marianela Ramos Capelo was originally published by Rabble magazine.

While the move to make political parties abide by data privacy laws is supported by Privacy Commissioner Daniel Therrien, Elections Canada, and members of the Access to Information, Privacy and Ethics Committee, and has wide popular support from Canadians (with 72 per cent of polled people supporting the measure) a recent opportunity to make it a reality fell through the cracks. The Liberal government decided not to include this requirement in Bill C-76 -- the bill that aims to update the Canada Elections Act -- and has rejected amendments by other parties to include these privacy requirements.

Minister of Democratic Institutions Karina Gould went as far as suggesting that requiring political parties to have a public privacy policy on their website was enough. This statement was surprising given that one of the stated aims of Bill C-76 was to establish measures that limit foreign interference in Canadian elections -- to prevent situations similar to the Cambridge Analytica-Facebook data mishandling scandal that took place during the U.S. presidential election.

Privacy laws are meant to regulate the collection, storage, and use of our personal data -- an increasingly valuable asset in today's digital world, and one that can potentially make or break elections (as we've seen with our neighbours south of the border). Therefore, it is irresponsible to let political parties hold themselves to a different standard. Whether it is creating specific privacy rules that regulate political parties, or requiring them to follow the existing ones (i.e. the Personal Information Protection and Electronic Documents Act or PIPEDA), it is time that the federal government holds political parties accountable for their use and misuse of Canadians' data. With a federal election coming up in the not-so-distant future, we cannot afford to put this issue on the back burner.

There is still time to put pressure on the Minister of Democratic Institutions to step up and, as her role dictates, put policies in place that ensure the digital health of the players in our democratic process. OpenMedia has launched a campaign to email both Minister Karina Gould and Prime Minister Justin Trudeau, to demand an end to double standards of privacy for political parties. So make sure to add your voice while there's still time.