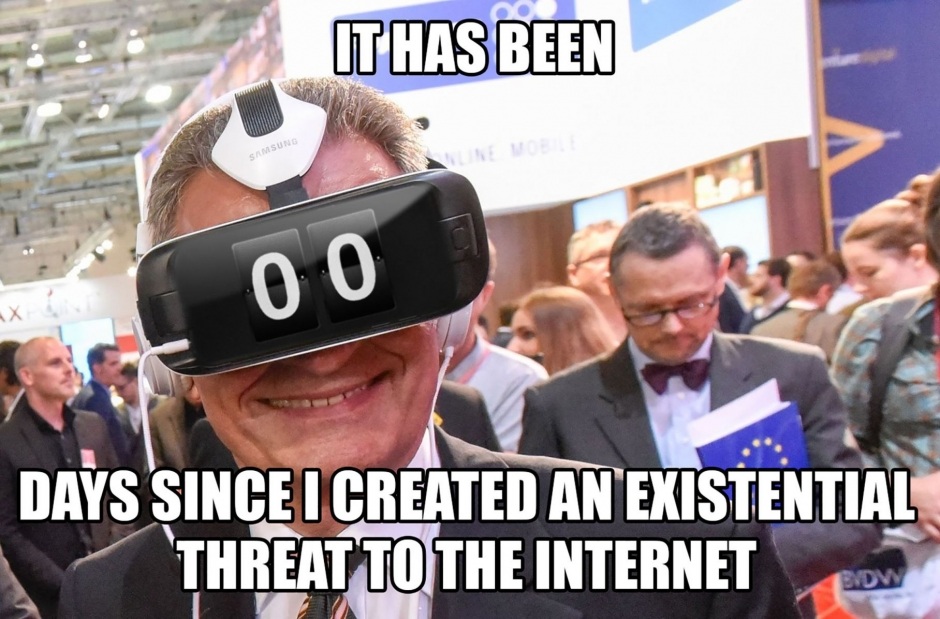 What the heck is ancillary copyright and why do we call it the Link Tax?

What the heck is ancillary copyright anyway? And why does it matter? And why do we keep calling it the link tax? All will be revealed within.

Over the past several months we’ve written a lot of blogs about ancillary copyright. (Here are a couple more.)

I’m sure that some of you are scratching your heads and thinking: but what the heck is ancillary copyright anyway? And why does it matter?

In practice, ancillary copyright as a ‘neighbouring right’ would give publishers the right to charge a fee for using snippets of text to point to content that is, for the most part, freely available elsewhere online. In turn, that would force website owners to publish raw HTML links, rather than including an explanatory headline or snippet of text — all in order to avoid incurring this new copyright fee. In simple terms, this means that you might see this:

Should we tax the Internet?

In this context, let’s take a look at where ancillary copyright has already been tried, and what implications it could have on our copyright landscape, and on our use of the Internet.

Ancillary copyright in Germany and Spain

In 2013, Germany passed an ancillary copyright law for press publishers. Leistungsschutzrecht für Presseverleger, as it’s called in German, was passed in 2013, and by all accounts has been a spectacular failure. The apparent impetus behind the proposal was to find a way to provide revenue to news outlets, some of which were feeling that in today’s digital age they were missing out on a share of the profits being made online – profits that they perceive are being made on the back of their products.

The law is aimed primarily at aggregation services and search engines, like Google News or Flipboard, that pull together links to content from a variety of sources. But arguably they could also affect services like reddit or even sites that repost links to news, like OpenMedia.

The argument, from a publisher’s perspective, appears to go something like this: we’re struggling, and you’re making money, so perhaps if we could have some of that money, we’d be better off. Proponents of the ancillary copyright for press publishers often argue that because these aggregation services make money from serving ads on a page where there are links to their content that some of the revenue from those ads should be forked over. Nevermind that when push came to shove, many publishers, including Axel Springer, one of the strongest proponents of the new law, ended up issuing free licenses to aggregators like Google News to avoid having their snippets removed.

Let’s pause for a second to acknowledge something fundamental about the way that the Internet works. The rise of search engines like Google or Yahoo came about because everyday Internet users who look for content online don’t, for the most part, type in the exact address that they’re looking for into the URL bar at the top of their browsers. Most of the time, people search common terms like “who won the football game yesterday?” or “why is everyone freaking out about climate change?”. It’s unlikely that to find what they’re looking for they immediately look for a specific website or blog post by exact name or URL.

This is one of the reasons why this legislation is so problematic. Indexing services help us find the information we’re all looking for – they’re like the phonebook for websites. And in this context, it’s clear that both the aggregators and the publishers benefit from these relationships. The publishers get traffic travelling to their content – a good thing! – and search engines and aggregation services have users who rely on them to aid in their navigation of the Web.

This symbiotic relationship comes into even clearer focus when we look at how the ancillary copyright law was implemented in Spain. Unlike Germany’s ancillary right which allowed for free licenses to be issued, when Spain passed its law in 2014, legislators added a new dimension: they made the law inalienable, meaning that even if publishers wished, they couldn’t waive the fees in favour of getting linked to.

And the proof is in the pudding. After the Spanish implementation, two things happened. The first was that innovative services and independent businesses had their futures crushed. Just take the example of Javier Sarda, who reached out to us after his boutique aggregation website, Newsletter Breeze, shut down due to massive legal uncertainty. The second was that Google News called it quits, and simply shut down their services in Spain. The collective impact of this one-two punch was that Spanish publishers lost an estimated €10 million a year.

Why do we call it a link tax?

The effect of ancillary copyright is, at its most basic, to monetize links online. Instead of being a public resource, like a road sign or a phone book, ancillary copyright turns each hyperlink into a little piece of copyrighted material, and aims to collect money for each of these blue URLs that we know Internet users rely on to find information.

Not only does this system harm access to this information, but we know that ordinary people, (you and I) normally bear the burden of increased cost for services. No company wants to take a hit to their bottom line without some sort of compensation, and as companies are required to pay for putting up these signs, we will almost certainly see that cost come back to haunt Internet users in some way.

Finally, we call it a link tax because these laws actually restrict innovative services from starting up and offering new ways for us to access information online. If a company wants to experiment with providing a new service, but immediately has to jump the hurdle of having to pay for each and every link, the likelihood is that this service won’t get off the ground. The link tax actually leaves us more vulnerable to remaining at the mercy of huge monopolies, as they are the only ones with the money to afford to pay for this terrible plan.

Ancillary copyright for the European Union?

So now we have both the German and Spanish implementations of ancillary copyright being regarded as a failure, even by those who argued in its favour. As European Parliamentarian and copyright rapporteur Julia Reda states:

The laws backfired, providing not a single additional cent to publishers (let alone journalists) as aggregators shut down or received free licenses from publishers faced with drops in their website traffic.

So you’d be among good company if you were confused about why this idea is now on the table to be expanded to the entire European Union. Using the ongoing copyright review as a vehicle, anti-innovation publishers are hoping that they can drive ancillary copyright into the heart of Brussels, and park it there for good.

The first indication that the European Commission – the body tasked with drafting the updated copyright legislation – was considering an ancillary right for press publishers came in a rather sneaky question included in last year’s copyright consultation on the role of online platforms. Aside from being almost impossible to understand (you can see the original questions on our re-framed consultation questionnaire here) the question as posed by the Commission only solicited comments from rightsholders.

Apparently unconcerned about the effect that forcing websites to pay a fee for linking to freely available content online might have on Internet users and innovators, this question was inherently biased from the get-go. Worse, it was actually changed near the end of the consultation period, likely after the complaints of numerous groups working on getting people to respond, and was opened up to individual responses. Too little, too late, as many people who had already shared their views were unable to comment.

Overall, more than 10,000 people took the simplified version of the survey that we worked to put together with the Save the Link network, and an overwhelming majority of them rejected the idea of ancillary copyright.

Undeterred, only weeks ago the Commission opened another consultation, putting the question of an ancillary right to the public again. In this equally confusing survey, the Commission zeroes in on the issue of ancillary copyright.

Why this will open the floodgates

Before new copyright laws have even been drafted, let alone passed in parliament, it appears that the proposal of an ancillary right is already being expanded. Instead of simply press publishers, what if all publishers of content got to charge a fee when other websites linked to them?

This could very well be where we are headed, as identified by MEP Julia Reda, who calls the consultation an opening to a “broader, badder version” of ancillary copyright, and again questions the design of the survey questions:

What you can do about it

The European Commission is soliciting feedback on their newest consultation about the link tax. Internet users have until June 15 to fill out their survey and let decision-makers hear the frustration from Internet users regarding a plan that will mean less exploration, less innovation, and more concentration of power in the hands of the huge publishers and existing monopolies.

We’ve put together a letter calling on Commissioners Ansip and Oettinger – the two key Commissioners working on the digital agenda – to scrap any plans for the link tax in their upcoming copyright draft. Already over 12,000 people have signed on and you can do the same.

We’ve also worked together with European digital rights organizations, including Copyright4Creativity, Edri, and Mozilla, to create a guide to help individuals respond in full to the survey. Check it out right here.

This is the final opportunity to raise your concerns before the Commission moves into drafting legislation that will update the Copyright Directive. We hope that you’ll take the opportunity to sign our letter today, and help us to kill the link tax once and for all.