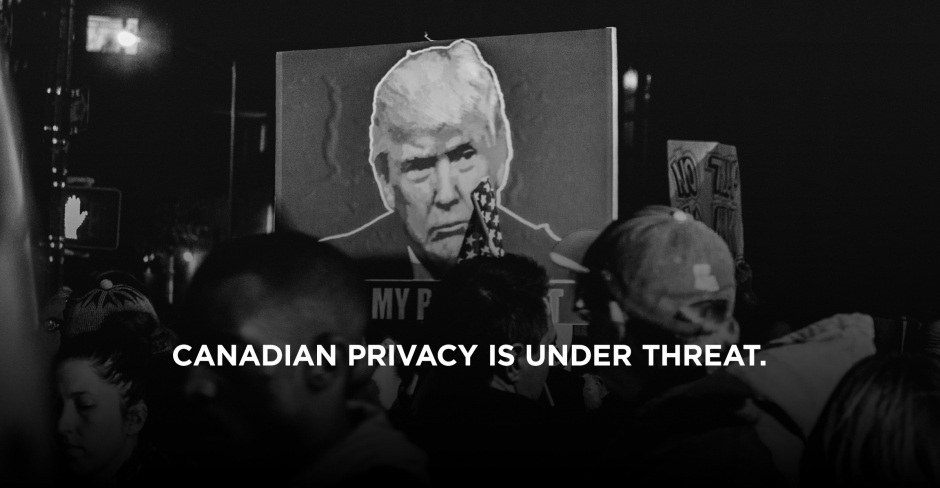 Trump’s recent attack on Canadian privacy has thrown Canadian data sharing agreements into the spotlight. We’re taking action with the Office of the Privacy Commissioner of Canada to ask for serious reconsideration of how Canadians should be protected from privacy violations in light of intrusive data sharing.

On January 25, 2017, U.S. President Donald Trump signed an executive order that stripped away even the smallest shreds of privacy still afforded to Canadians when our data enters the United States.

The order declared that federal agencies “shall, to the extent consistent with applicable law, ensure that their privacy policies exclude persons who are not United States citizens or lawful permanent residents from the protections of the Privacy Act regarding personally identifiable information.”

With the data of millions of Canadians entering the U.S. via Internet traffic routed through the U.S., or by agreements our own government has made to routinely share personal information with U.S., this move has prompted concerned responses from privacy experts and civil society organizations across Canada.

This is certainly not a new issue. For some time, vast amounts of personal data of Canadians has been regularly shared with U.S. agencies by Canadian government agencies — and this data-sharing of sensitive, personal information provides the U.S. administration with an open window into the lives of countless innocent Canadians.

What’s more, in addition to government information sharing arrangements, it is estimated that 90% of Canadian Internet traffic is routed through U.S exchange points, even if it’s both sent and received within Canada. Once this data goes beyond our national borders, it is stripped of any protections it once received under Canadian law and is subject to surveillance by the U.S. National Security Agency (NSA).

That’s why we’re taking action. We’ve filed a letter of concern (embedded below) with the Office of the Privacy Commissioner of Canada asking for an immediate independent investigation and positioning statement clarifying and providing clear recommendations for what privacy protections for Canadians should look like, and identifying any new responsibilities Canadian government agencies now face when making personal information available to U.S. agencies.

Letter of Concern Regarding Trump's Attack On Canadian Privacy

While this order has thrown the privacy rights of Canadians into the spotlight once more, the truth is that for far too long, we have been afforded far too little protection when it comes to our private data. It’s time for our government to step up and tell us how they plan to protect our privacy.