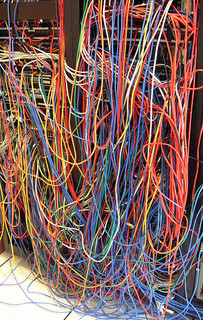 Canadian citizens are paying for Internet access, but Big Telecom isn't being completely open about the restrictions that they've been imposing. With new data just published by the Measurement Lab, Canadian service providers such as Bell and Rogers have been exposed as interfering with over 75% of torrent transfers and download speeds. The CRTC confronted Rogers about bandwidth throttling late last year, to which Rogers responded with a promise that they would end interference by the end of this year. Although Bell has made a similar promise to their consumers as well, it doesn't seem like we're seeing any changes just yet. If you've experienced any throttling issues with your provider, tell us about it in the comments below. To make the switch from Big Telecom to an independent ISP, visit our campaign page at http://openmedia.ca/switch. Article by Ernesto at TorrentFreak.com New data published by the Google-backed Measurement Lab gives a unique insight into the BitTorrent throttling practices of ISPs all over the world. In the U.S. and Australia most large ISPs limit less than 10 percent of BitTorrent transfers. In the UK and Canada on the other hand, some providers interfere with up to three-quarters of all BitTorrent traffic.

Hundreds of ISPs all over the world limit and restrict BitTorrent traffic on their networks. Unfortunately, most companies are not very open about their network management solutions.

Thanks to data collected by Measurement Lab (M-Lab) the public can learn if and how frequently their Internet provider limits torrent traffic. Among other tools, M-Lab runs the Glasnost application developed by the Max Planck Institute.

Previously the researchers published data up until 2010, and now the results have been updated to include the first quarter of 2012. This allows us to give an overview of trends and changes that have emerged in recent years.

Canada is not the most friendly country for BitTorrent users. Nearly all of the major Internet providers are heavy throttlers and Rogers tops them all. For more than half a decade Rogers has continuously throttled more than three-quarters of all BitTorrent traffic.

During the first quarter of 2012 the provider interfered with 80 percent of all BitTorrent transfers, showing that there has been no improvement. Bell is a good second with 77 percent, up from 56 percent last year.

BitTorrent users in Canada are best off at Cogeco and Telus with 3 and 0 percent respectively. Read more »