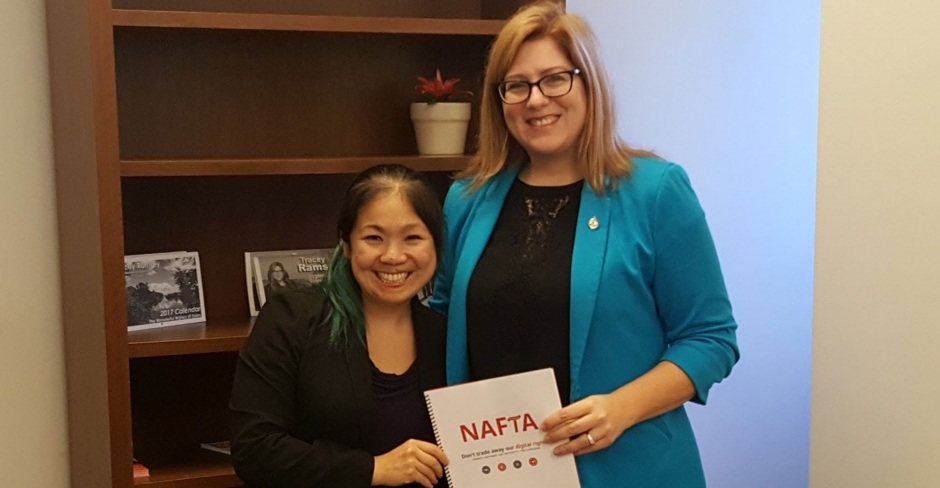 Taking Your Voices on NAFTA to Ottawa

Earlier this week, I had the honour of bringing your voices and concerns on the North America Free Trade Agreement (NAFTA) to Tracey Ramsey, NDP Member of Parliament for Essex, Ontario. Tracey also happens to be the NDP Critic for International Trade, and is Vice-Chair of the House of Commons Standing Committee on International Trade (CIIT)—making her the perfect person to help us hold the federal government accountable to Canadians as they hold our Internet rights and freedoms in their hands while negotiating with Mexico and the United States.

The Committee is currently studying how NAFTA will impact Canadians, and will publish a report of their findings. Tracey nominated OpenMedia to contribute to the study as a witness, due to our history advocating for and representing community voices on the Trans-Pacific Partnership (TPP), to protect our digital future.

Unfortunately, we will have to fight equally as hard for our digital rights when it comes to NAFTA. It seems that the Government of Canada failed to learn any lessons from the TPP process, which many characterized as a fundamental deficit of democracy. The TPP process included a near-completely opaque process, lack of meaningful consultation, near-exclusive access to corporate lobbyists (if it weren’t for leaked drafts), and of course, the resulting harms to online privacy and free expression that the government would have bound all Canadians to for the foreseeable future. And unless we do something about it, the evidence so far suggests NAFTA will be no different.

Tracey, as well as her assistant Lindsay, and I discussed Canadians’ concerns about NAFTA and how we could best ensure that the Canadian government does not trade away or sell out our digital rights. I laid out the following priorities on behalf of our community:

1. Transparency: Global Affairs Canada, and Foreign Affairs Minister Chrystia Freeland, must release draft texts of the renegotiated agreement to the fullest extent possible, to the Canadian public. While there are legitimate reasons for confidentiality when it comes to international negotiations, Canadians have a right to know and influence what their government is negotiating for—or more importantly, what their government is negotiating away—allegedly on their behalf.

It is unacceptable and embarrassing that while the United State immediately released all of their public consultation submissions to the public, Canadians are still let in the dark by our own government. It is also inexplicable that the process to reform our national security legislation has featured more transparency (by releasing all consultation submissions) than what amounts to a massive commercial transaction, albeit with far-reaching non-commercial implications.

Given the above, the federal government’s duty is clear: Canadians must know clearly and specifically what is inside the renegotiated NAFTA, before it becomes a done deal.

2. Accountability: Foreign Affairs Minister Chrystia Freeland must release the over 21,000 submissions that Canadians sent to Global Affairs Canada to share their views on NAFTA. Without knowing what Canadians said, advocated, opposed, or recommended, we will have no way of knowing whether or not Minister Freeland is truly taking Canadians’ views and best interests into account at the negotiating table. Global Affairs Canada must release all NAFTA consultation submissions to the public.

3. Free Expression: It’s no secret that Canada has for years had to withstand ongoing pressure from the United States to make our intellectual property laws harsher and more punitive than they are now. What’s worse, the Canadian government has already given in several times, rather than standing up for Canadians’ ability to create, remix, research, and contribute to the cultural commons.

This would distort our globally esteemed, “made-in-Canada” copyright laws that resulted from years of national consultation and feature a balanced approach between addressing rightsholders’ concerns, where legitimate, while upholding users’ rights, fair dealing and protecting the public domain. Canada’s carefully crafted copyright system may be on the chopping block again at the NAFTA table, despite an upcoming statutorily mandated review of the Canadian Copyright Act, which means reviewing it for the first time since we modernized our copyright laws in 2012.

When it comes to protecting our right to free expression online, a renegotiated NAFTA must do the following three things: a) protect Canada’s measured and effective notice-and-notice regime; b) include an explicit, positive obligation for all three countries to ensure balance, protecting users’ rights and fair use / fair dealing and the public domain; and c) require copyright terms of no longer than 50 years beyond the author’s life, which is in keeping with international treaties.

4. Privacy: According to NAFTA negotiating objectives published by the Office of the United States Trade Representative (USTR), one of the United States’ goals in NAFTA will be to promote cross-border data flows. This may limit Canada’s ability to protect Canadians’ data privacy, if it means restricting laws about data localization (keeping data within our own borders). For example, both British Columbia and Nova Scotia have laws that require public bodies to store Canadians’ personal information in domestic servers within Canada. This matters a great deal, as we lose constitutional projection over our own data if it flows to the United States, which gives short shrift to non-U.S. (and many would say, also U.S.) citizens’ data and privacy rights.

As stated in a joint letter from digital rights groups in Mexico, Canada, and the United States: “any rules aimed at promoting the free flow of data across the Internet and reducing barriers to trade in digital products and services must preserve countries’ flexibility to robustly protect individual privacy and security, including the ability to place limits on cross-border data transfers or on the protection of trade secrets”.

5. Net Neutrality: While net neutrality has made for a long drawn-out and separate battle in its own right, there is a chance that Canada will be pressured to weaken our own strong and hard-won net neutrality rules to appease the United States. Net neutrality has been called the “first amendment of the Internet”, and is the principle that ensures all Internet service providers must treat all data equally—no blocking, throttling, or paid prioritization. It’s what ensures that no matter who you are or how much you have or don’t have, you will have equal opportunity to reach audiences, contribute to public discourse, form community, engage in politics, and get your message out. Under no circumstances should the Canadian government allow the United States to weaken net neutrality in Canada.

Thanks to Tracey’s efforts, OpenMedia will be submitting a written brief to the Standing Committee study on NAFTA’s impacts on Canadians—and you can be sure we will be including your voices in that, as well. If you want to learn more, feel free to read our submission to the Global Affairs consultation, and take action to support our digital future here (for Canada) or here (international).