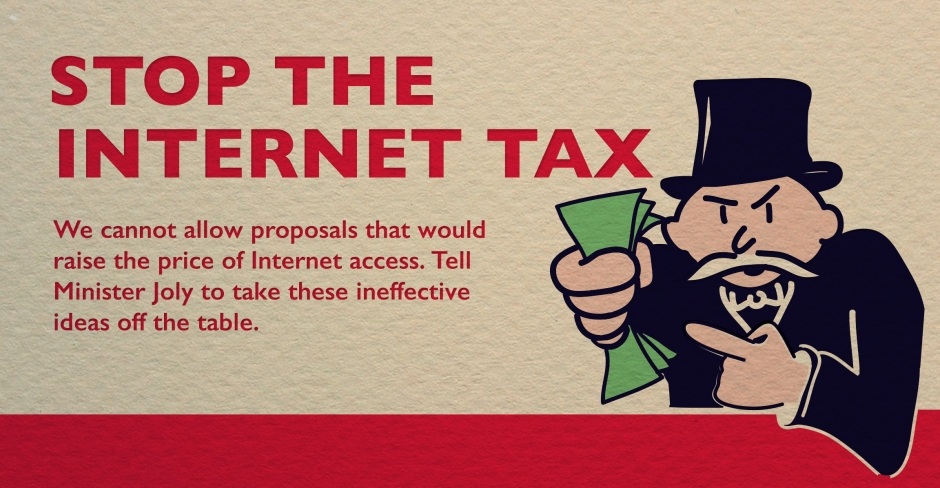 The Internet tax is a raw deal for all of us

The Internet Tax – a defeated and deflated policy attempted in Hungary – is making its way to Canada. Yikes!

In 2014, the idea of an ‘Internet Tax’ was inducted into the Bad Policy Hall of Fame. At the time, the BBC reported that in response to a proposal by the Hungarian government to tax Internet traffic, “Large-scale protests began...when demonstrators hurled old computer parts at the headquarters of Mr Orban's ruling Fidesz party.”

In addition to demonstrating creative ways to get rid of e-waste, hordes of angry Hungarians lobbing old server parts at government offices showed just how unpopular the idea of an Internet Tax was – important enough that tens of thousands took to the streets to make their disapproval impossible to ignore.

And yet, like most bad ideas dreamed up by cash-hungry governments and big industry executives, the Internet Tax has popped its head up again after a long winter, and is coming back to haunt Internet users right here in Canada.

After all, putting a levy on the global phenomenon that we all use to communicate and share culture could theoretically generate huge piles of loot – an attractive scheme, but for the fact that it comes at the expense of freedom of expression, access to information, and undermines the goal of bridging the digital divide and providing affordable access to all.

But what if we use our powers for good?

How did we get here? In Canada, the government is currently in the process of consulting with Canadians about how to sustain cultural industries and better promote Canadian culture in an increasingly digital world – a laudable goal indeed.

However, it’s in this context that we’re seeing a deluge of concerning policies floated, in the form of levies or taxes on one digital service or another. Perhaps the worst idea is levying a tax on Internet Service Providers (ISPs) – a reincarnation of Hungary’s failed Internet tax – a move that would raise the price of Internet access for every single Canadian Internet user, with the apparent aim of funneling some of that money back into supporting Canadian content creation.

This is a terrible idea, not least because Canadian Internet subscribers already pay some of the highest prices in the world for what is widely recognized as poor service. In fact, these high prices mean that 1 in 5 Canadians cannot afford home Internet access, a figure that rises to over 44% of low-income Canadians.

This might be why a tax that would undoubtedly jack up monthly bills even higher is hugely unpopular with Canadians. And while some may counter that a tax could be levied on ISPs and not individuals, it’s not an argument that holds much water. ISPs are private companies, duty bound to create the most profit for shareholders and executives. The likelihood that they would elect to swallow additional costs instead of passing it directly onto subscribers is next to zero.

What’s more, the move would come at the greatest cost to the most vulnerable members of society – low-income families, Indigenous communities, and rural and remote Canadians who already have great difficulty connecting to the Internet in a reliable, affordable manner.

As Michael Geist, Canada Research Chair in Internet and E-Commerce Law at the University of Ottawa, describes the blowback from this flawed approach:

The ISP tax would come at an enormous cost to other policy priorities. Internet access in Canada would become less affordable, expanding the digital divide by placing Internet connectivity beyond the financial reach of more low-income Canadians. The increased costs would also be felt by the business community, potentially undermining the innovation strategy currently championed by Navdeep Bains, the Minister of Innovation, Science and Economic Development.

And simply unnecessary when considering that there are a number of alternatives to the Internet Tax that could just as easily be implemented with the aim of supporting sustainable funding models for the creation and promotion of Canadian content. Here are just a few:

There are many other alternatives on the table that would not work against our shared interests – like the Internet Tax – which would raise the cost of access for Canadians and put innovation on the back burner. Let’s consider those instead.

If you’re in Canada, join our No Internet Taxes campaign today.