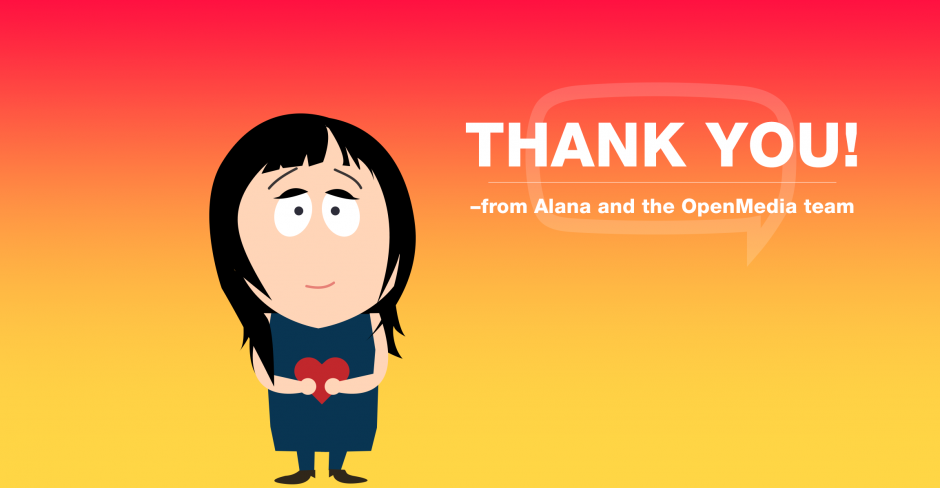 I was worried. Now, I’m filled with gratitude.

Your support fuels our work and the people who are behind it. Thank you so much!

“I’m worried.” That was the subject line of an email I sent to the entire OpenMedia community a month ago. OpenMedia had been falling behind on our fundraising targets for the past few months and as the team’s development lead, I was getting stressed out planning how we were going to catch up.

But only a day after sending that email, our team couldn’t believe the generous support pouring in from people all over the world who genuinely care about keeping our work to fight for digital rights going strong. Saying thank you never feels like enough to show you how much of a difference you make — but I'm here to try.

After a month-long crowdfunding campaign, I’m so thrilled to tell you we met our target! We also received very generous gifts from Private Internet Access, TekSavvy, and Distributel which were enough to triple the support from thousands of grassroots donors.

More than 50 percent of OpenMedia’s funding comes from small grassroots donations. Having thousands of people chip in on a regular basis makes us stronger —  every donation adds up and the widespread diversity of supporters means we're not counting on any single major donor to sustain critical work. It also means the voices we represent are truly the backbone of what we do and we have the flexibility to jump on breaking issues that matter to you.

OpenMedia is an advocacy organization. We spend a lot of time carefully researching political policies that would harm the open Internet and figuring out the most effective ways to intervene. That always involves creatively engaging and empowering enough people to trump the influence of spy agencies and corporate behemoths. How we do that involves a lot of behind the scenes hard work from some really amazing people. I’d like to introduce a few of them here.

Meet Katy Anderson, OpenMedia’s Access Campaigner. Katy was instrumental in OpenMedia’s fight winning the Internet’s official declaration as a basic service. That means high-    speed Internet for every household in Canada — no matter where you live, or what your income is. But in order to make that happen, the government needs a national broadband      strategy, and Katy is busy fighting for just that.

Katy’s work was also pivotal in banning zero-rating practices that would have undermined Net Neutrality in Canada. And as always, she’s busy working to unshackle our cell phone    market from the dominance of Bell, Rogers and Telus (stay tuned!). Katy is also paving the way to stop Bell’s notorious, nationwide website blocking scheme.

Meet Victoria Henry, OpenMedia’s Privacy Campaigner. Victoria held the government accountable to listening to Canadians in National Security                 Consultations that were used to   shape legislation around spy powers, and mass surveillance tactics that recklessly monitor our online activities. Thanks   to Victoria’s campaign and your voices, the government   said, “It looks like people really understand and care about digital privacy rights after all! We’d     better introduce a new law to make this right!.” Ok, they didn’t actually say that – but   that’s the message they tried to send by releasing a new bill, C-59.   The trouble is, C-59 doesn’t go far enough and Victoria is still fighting to improve it and get the privacy   protections you deserve written into Canadian   law.

Meet Marie Aspiazu, OpenMedia’s Free Expression lead and social media guru. Marie works tirelessly to engage as many   humans as possible to be the people power behind our   campaigns. Her role at OpenMedia has grown as does the need for   her talents in the realm of digital rights campaigning. Marie’s efforts were crucial in suspending Intellectual   Property provisions   from the Trans Pacific Partnership that would have kept creative content locked out of the public domain by extending copyright   to 70 years plus life of the   author.  Now, Marie is working hard to make sure similar restrictive provisions don’t find their way   into the North American Free Trade Agreement (NAFTA) and Canada’s updated   Copyright Act, along with more absurd   website blacklisting laws that are currently being proposed to censor the web as we know it.

Meet Laura Tribe, OpenMedia’s Executive Director. Laura leads from behind, meaning she not only   helps strategize and oversee all of the work described above, she also stays late   to help edit   communications, deploy new web tools and put out burning fires — the be-all end-all characteristic of   an excellent, supportive leader. Ask any OpenMedia staff and they   will all say, “I don’t know how she   does it!” Laura meets with politicians to show them how our Internet and telecom market is broken,   she testifies at hearings to represent civilian   voices before parliamentary committees, and keeps   every member of our team motivated and inspired on a daily basis. She also speaks about your issues   and concerns to media   outlets like the CBC, Power & Politics and the Globe and Mail making   headlines about fighting for the Internet Canadians deserve.

And finally, meet me, Alana Schultz, OpenMedia’s Director of Development. No headshot here because you can see me up top featured in my short thank you video 😊 I spend nearly every hour of my workweek figuring out how to fund all of my colleagues’ steadfast efforts to fight for an Internet that’s open, accessible and surveillance free. Knowing that we have a community of people like you who understand the value of this work and are willing to support it, is what makes my job so rewarding.

We get a lot of emails in our general inbox asking what grassroots donations help us accomplish. Although you can see our campaigns and advocacy tools online, a lot of the long hours that go into this work are invisible to the everyday supporter. I hope I’ve been able to give you a taste of what and who your generosity is propelling every day.

We can’t thank you for it enough!