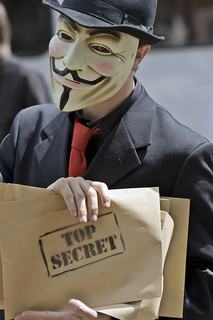 The government has mistakenly sent us at OpenMedia a non-disclosure agreement intended for lobbyists involved in the Trans-Pacific Partnership. This is confirmation that this secretive and extreme agreement is being put in place on behalf of bureaucrats, not citizens. We're on the ground at the ongoing TPP negotiations, set to read out your comments to officials this Friday. Send in your messages at OpenTheTPP.net and help us speak out against the TPP's Internet trap. Article by Daniel Tencer for The Huffington Post The Harper government is creating a secret “consultation group,” likely comprised of lobbyists, who are getting inside information about Canada’s participation in Trans-Pacific Partnership (TPP) negotiations, observers allege. Advocacy group OpenMedia has obtained a non-disclosure agreement (see below) it says the federal government mistakenly sent to it, asking the recipient to keep secret the information it receives about negotiations on the controversial economic and trade agreement. “I think it confirms that lobbyists are being permitted to have access to information about the TPP that is otherwise kept secret from public interest groups and citizens in general,” OpenMedia executive director Steve Anderson told The Huffington Post Canada in an email.

“It appears ... the Canadian government got confused about which contacts were industry lobbyists and which are from public interest groups.”

Digital law expert Michael Geist wrote on his blog Friday that the consultation group “raises a host of concerns including questions about who has privileged access, whether civil society groups will also have access and be invited to join, and the extent of behind-the-scenes consultations with industry groups.”

Geist added that “the lack of transparency with the TPP is now exacerbated by a two-tier approach to TPP information with a select, secret group gaining insider access to information.”

He called on the Department of Foreign Affairs and International Trade to immediately disclose who has been given access to the TPP consultation group.

The Trans-Pacific Partnership is a trade deal currently being negotiated between 11 Pacific rim countries, including Canada, the U.S., Australia, Malaysia and Singapore. Japan may also join the talks.

Critics have raised concerns about intellectual property rules that may find their way into the agreement, with OpenMedia and the Council of Canadians describing it as an “internet trap” that could “criminalize some everyday uses” of the web, including small-scale file-sharing of music. Read more »