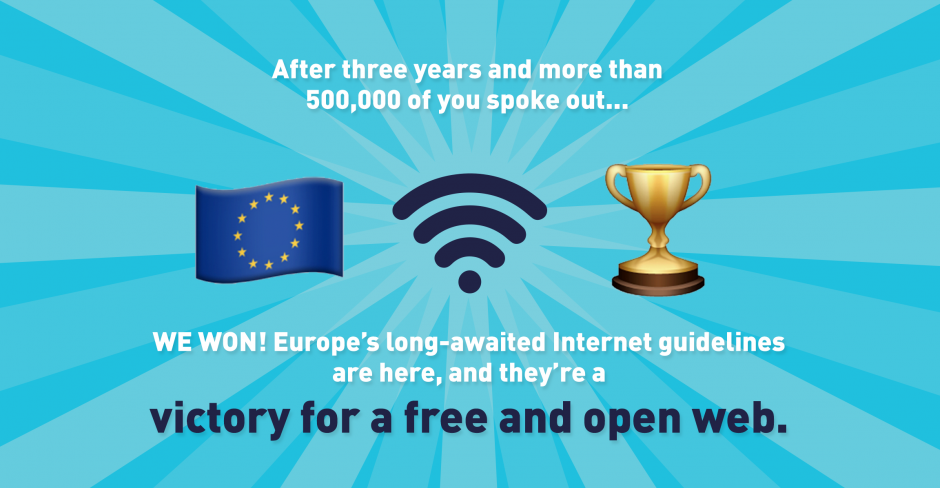 The rules are as strong as digital rights advocates could have hoped for — and now we need to make sure they’re enforced.

After three years and more than 500,000 people speaking out for an open Internet, Europe’s long-awaited Net Neutrality guidelines were released today.

And theylookgood— thanks to all of you who spoke up as part of our No Toll Booths on the Internetcampaign!

Internet advocates, led by the coalition at SaveTheInternet.eu, are celebrating the Body of European Regulators for Electronic Communications (BEREC)’s rules, which among other protections, largely ban telecoms from favouring certain Internet services over others — effectively picking winners and losers online.

The guidelines are based around “NetNeutrality” — a foundingconcept of the web which stipulates that all content be treated equally. Strong Net Neutrality rules ensure a level playing field for service providers, as opposed to, say, cable TV where only those that can afford the hugely prohibitive costs are able to reach an audience.

Today’s strong Net Neutrality rules set an important precedent for governments around the world on how to ensure the web stays open. And the resulting benefits will be felt not only by online citizens within the E.U.’s borders, but by the many more whose favourite sites are based in Europe. By ensuring that no content is prioritized over other content it prevents an Internet “toll booth,” where only those that can pay can hit the highway.

This allows for an equal playing field where innovation can flourish. The equal web has allowed for rapid, paradigm-shifting changes in how we spend our free time, learn, and communicate with each other. Now ubiquitous services like YouTube and Netflix are allowed to compete, and flourish, alongside giant media conglomerates like Comcast and Time Warner, ushering in an age where communities broadcast to each other (in whatever form that takes, from videogame streaming to sharing contouring tips) and to a new golden age of TV.

While Europe’s new Net Neutrality rules are a great start, we need to stay vigilant for the web we want. The guidelines will mean nothing if they lack teeth. We must work hard to ensure telecoms are held to account in as many countries as possible. The rules must be applied justly and in a transparent way to ensure Internet service providers are made to stick to them.

Telecom companies and their powerful teams of lawyers and lobbyists will do everything they can to find their way around these rules. Just earlier this summer, major EU telcos recently tried to manipulate the rules by threatening not to invest in an inevitable, not to mention profitable, 5G wireless network in an attempt to kneecap Net Neutrality rules.

The public sphere must stay on its toes to ensure the spirit of the guidelines are followed. One tool that will allow for this is Respect My Net, where people can track Net Neutrality violations to help keep track of the different ways giant telcos violate our online freedoms.

And in countries where guidelines are being looked at now, likeCanada, we must make sure decision-makers feel the same pressure their counterparts did in the EU so they come up with equally strong open Internet rules.

Let’s stop Internet slow lanes for our favourite websites and apps, end data caps, and stop predatory practices by telecoms once and for all.