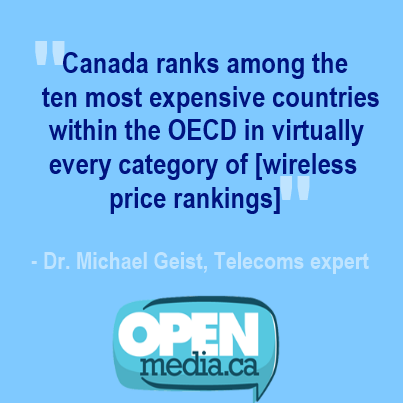 Confirmed: Canadians pay some of the highest prices for some of the worst telecom service in the industrialized world

The OECD have just released their 2013 Communications Outlook - a heavyweight independent report that offers a detailed examination of the state of telecommunications across the world’s leading 34 industrialized countries. The report confirms what pretty much everyone already knew - that Canadians do indeed pay some of the highest prices for some of the worst service in the industrialized world. Telecoms expert Michael Geist has examined the 320-page OECD report in depth, concluding that: “Canada ranks among the ten most expensive countries within the OECD in virtually every category and among the three most expensive countries for several standard data only plans.”

The OECD results make for depressing reading, as they show Canada continuing to fall further and further behind our global counterparts:

The OECD’s expert findings couldn’t have come at a worse time for Big Telecom, who have been running an expensive and highly misleading advertising campaign to try to convince Canadians that our prices ain’t so bad. Canadians have been using the Internet to debunk Big Telecom’s misleading claims - and this OECD report proves that Canadians were right to see through Big Telecom’s ridiculous spin.

Why is Canada falling so far behind the rest of the industrialized world? Our high prices are the direct result of the fact that 94% of our broken wireless market is controlled by just three giant Big Telecom conglomerates. Many Canadians have no alternative to the high-cost Big Three.

How has Big Telecom responded to this damning OECD evidence? Unsurprisingly, with yet more misleading PR spin. We’ve even seen a Telus VP state that: “Canada really SHOULD be the most expensive country for wireless service in the OECD”. There’s no sign of a willingness to face the facts - these old-style, unaccountable telecom bureaucracies remain stuck in the past, wedded to their outdated, high-cost model that has long since fallen out of fashion elsewhere.

The way ahead is clear - thousands of Canadians across the country have laid out a clear road map forward. We know that new Industry Minister James Moore is a real Cabinet heavyweight - someone with the power and influence needed to take on Big Telecom and finally bring about real change.

Expectations for Minister Moore are high - Canadians deserve bold, swift action to fix our broken wireless market by opening up our networks. We need nothing less if Canada is finally to start catching up to our global counterparts. You can play your part by sending our in-depth crowd-sourced policy road map to your MP and demanding action.