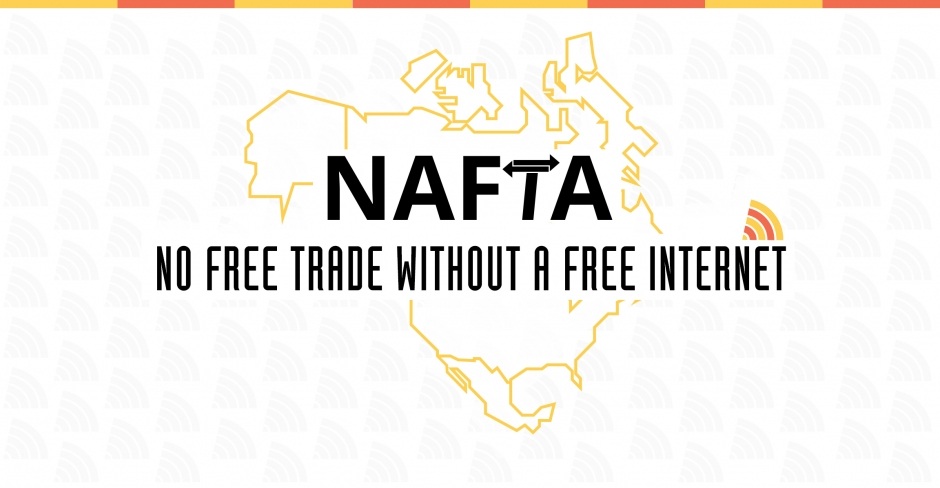 Organizations from Mexico, Canada and the United States highlight the need for increased transparency and urge the exclusion of intellectual property provisions

The organizations are calling on NAFTA nations to make meaningful reforms to trade processes to make them more transparent and responsive to public input, and are warning that close attention must be paid to the impact of the agreement on critical functions of the Internet. They also urge negotiators to resist the inclusion of intellectual property and copyright provisions.

We’ve seen firsthand how a complete lack of consultation and public engagement led to the downfall of the Trans-Pacific Partnership (TPP) and a breaking of public trust in trade processes. All NAFTA nations should recognize the danger in reproducing conditions that will inevitably lead to the mass public rejection of yet another trade agreement.

Jeremy Malcolm, Senior Global Policy Analyst for the Electronic Frontier Foundation, said: "It's astonishing that far from correcting the mistakes that led to the downfall of the TPP, the USTR is on track to compounding those mistakes—holding no public stakeholder events in association with the first round, and doubling down on the secrecy of the text. What chance is there of reaching agreement on fair, balanced rules for copyright or digital trade, when public interest groups with important views about those issues are being kept in the dark?"

Burcu Kilic, legal counsel for Access to Medicines, Innovation and Information at Public Citizen said: “If intellectual property is not excluded from the NAFTA talks, the IP chapter should be kept as slim as possible and should not lead to rewriting already-existing TRIPS-plus and NAFTA-plus standards. NAFTA renegotiations should not serve as a forum for powerful lobbies to continue pushing for maximalist IP standards that fail to account for the interests of Americans, Mexicans and Canadians.”

Gus Rossi, Global Policy Director at Public Knowledge, said: "If NAFTA addresses intellectual property, it is critical that user rights are protected and the demands of rights holders are balanced. NAFTA must maintain user protections, including exceptions and limitations regimes and fair use. In addition, NAFTA must be negotiated in a transparent way, in order to best serve the public interest."

See the full statement below: