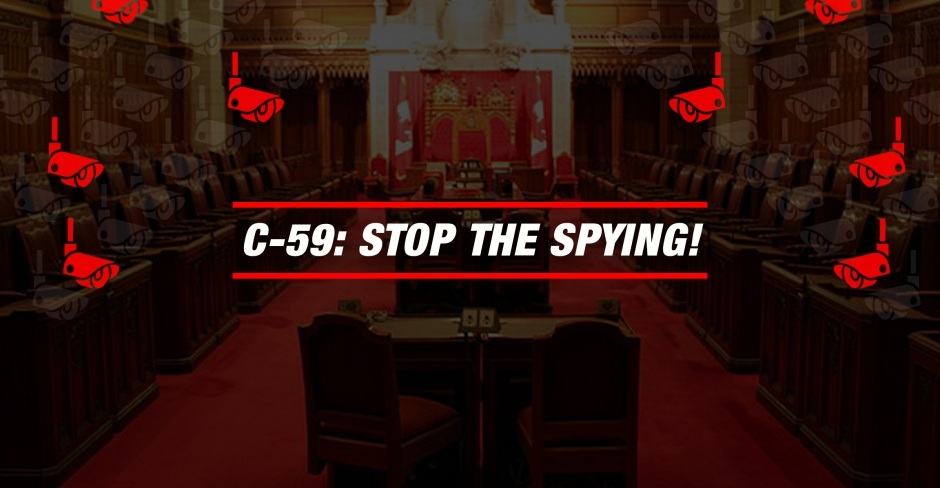 The government has stopped far short of their commitment to truly listen to people in Canada and stop the outrageous privacy violations of the notorious spying bill known as Bill C-51. But it doesn’t stop here.

When the Liberal Party of Canada came to power in October of 2015, they had a very significant promise in their party platform to uphold: to reform the notorious spying bill known as Bill C-51. But four years later, it’s clear to see that not all promises are kept, and we still have a long way to go to rein in Canada’s reckless, overreaching mass surveillance powers.

When the previous Conservative government introduced and rammed through Bill C-51 earlier in 2015, they weakened the privacy rules that keep us all safe, and left people in Canada deeply worried about government surveillance and the security of their private data.

Presented as anti-terror legislation, Bill C-51 handed sweeping new powers to Canada’s spy and security agencies and was openly hostile to civil liberties. Just a few of the frightening and draconian measures brought in by the bill include:

Naturally, people spoke out in the hundreds of thousands. Over 300,000 people participated in public demonstrations in Canada, phoned their government representatives, or took online actions to repeal the bill.

They were backed up by experts, including 12 Canadian privacy commissioners, 100+ law professors from across Canada including the Canadian Bar Association, and over 100 civil society groups and experts, who all opposed the bill.

So when the Liberals promised reform, the community watching was large, outspoken, and ready to hold them to account.

The process of reform started with a Canada-wide consultation, and it was there that the first warning signs that this so-called reform wouldn’t be what was promised appeared.

The in-person consultations were called ‘utterly demoralizing’, while the online consultations were critiqued by experts for biased and leading questions. Despite the participation of over 68,000 individuals, the government was reluctant to release the actual responses they received, until they came under significant pressure from OpenMedia supporters.

When they were finally released, the raw data as well as the government’s summary “What We Learned” report both confirmed that the vast majority of people in Canada have significant concerns regarding privacy and government accountability with sensitive data, and wanted C-51 to be completely repealed.

Many people saw this consultation as a key test of the Liberal Party’s tactic of holding consultations on important issues. Namely, would the promised reform bill fix the important concerns raised by citizens, experts and civil society?

The government’s proposed fix: new legislation with more of the same

Bill C-59 was announced in June 2018, and the fears that many had about the bill were immediately realized: instead of repealing C-51 or making much needed key reforms, C-59 merely tinkered at the margins while introducing a host of new problems. While some much-needed improvements were included, it failed to adequately address the information disclosure provisions, and terrorist speech offenses brought in by Bill C-51. It also brought in new data collection, cybersecurity and mass surveillance powers which further threaten our privacy and security.

As the bill progressed through Parliament and the Senate, thousands upon thousands of people in Canada contacted their MPs, signed petitions and supported calls to fix the bill before it was too late. Despite that, all the Liberal motions were adopted, virtually all Opposition motions were defeated, very little of substance was changed to the bill, and virtually no human rights protections were added.

In June 2019, C-59 was passed and received royal assent – almost 4 years to the day after its predecessor.

The big question is, what changes were made, and what were the big areas left unchanged or even made worse?

There were some significant and hard-won victories in Bill C-59, even though many didn’t go far enough:

But sadly many key issues remained unresolved, and C-59 even added in frightening new anti-privacy measures:

Make no mistake: the improvements and changes that C-59 bought in are incredibly hard-won and valuable.

It’s easy to only focus on the remaining challenges, where the changes haven’t gone far enough. But our community fought tirelessly together, from rallies in the streets to testifying at Parliamentary committee – thousands upon thousands of us worked relentlessly to protect the privacy of ordinary people throughout Canada, who are all subject to overreaching mass surveillance. That kind of collaboration, and collective advocacy cannot be overlooked.

It’s a saddening failure of the government that they stopped far short of their commitment to truly listen to people in Canada and stop the outrageous privacy violations that they promised to fix.

But it doesn’t stop here.

2019 is an election year, and a critical time when every party, and politician, looking to get elected cannot ignore the voices of their constituents. The next government will be accountable for the systems currently in place, and any changes made to either improve, or worsen, the surveillance state being built around us.

As the election draws near, it’s time to put a stake in the ground on the issues that matter most to you. If you’re concerned about mass surveillance in Canada, and the government’s failure to protect its citizens’ rights – make this an election issue. Ask your local candidates what they think should be done. Attend town halls, and ask questions. Make sure that any time you’re  interacting with people looking to represent you in government, you know exactly where they stand.

The fight for our right to privacy is just getting started – and we’re in it for the long haul.