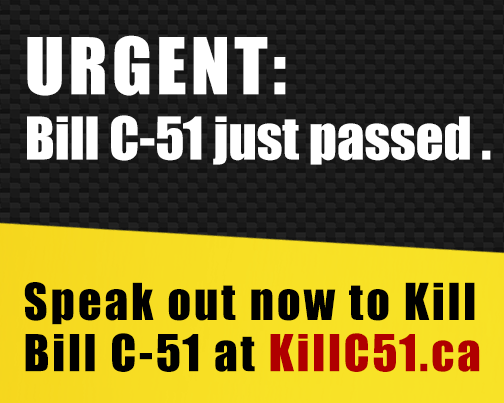 Bill C-51 Just passed. Where do we go from here?

This just in from Ottawa: The Senate just passed Bill C-51 today by 44-28, despite massive opposition from hundreds of thousands of everyday Canadians and the country’s top privacy experts. Reckless Bill C-51 will now become Canadian law. Here’s who sided with Canadians: Most of the independent Senators from the Liberal Party and independent Progressive Conservative Elaine McCoy.  Thanks to each and every one of them for doing the right thing and trying to prevent this dangerous Bill from becoming law. Sadly, Conservative Senators were able to use their majority to ignore Canadians and force this bill through.

In light of the damning evidence of the surveillance abuses Bill C-51 allows, the Parliament had an opportunity to protect the Charter of Rights and listen to what Canadians were demanding.

It’s no secret that this is bad news. When the world’s largest security-oriented intergovernmental organization says Bill C-51 violates the Universal Declaration of Human Rights, you know this bill is a real threat.

As Debra Davidson from our social community puts it, “The Senate has failed miserably at stopping bills such as Bill C-51 over the past decade or two, due to voting along party lines, rather than upholding their sworn duty to protect the Constitution and Charter of Rights and Freedoms of their citizens.”

But at OpenMedia we have been fighting bad legislation that would hamper our online rights and freedoms online for years now. This vote means we need to keep fighting all the way through to the October election. We will make sure every Canadian voter knows where their representatives stood when it mattered most.

We’re going to need every single one of you as we turn to our larger mission: Kill Bill C-51.

Above all, Bill C-51 underlines just how stark Canada’s privacy deficit has become. And we need a comprehensive approach to fix it. That’s why, over the last weeks we launched our very own Privacy Plan, a positive pro-privacy action plan, packed with ideas from 125,000 Canadians, aimed at addressing Canada’s privacy deficit. We had the chance to meet with MP Justin Trudeau and hand him this crowdsourced report with the common sense steps to strengthen privacy safeguards for all of us.

The next stage of this fight will be absolutely crucial: Over 240,000 Canadians have now signed the petition against the bill at StopC51.ca and tens of thousands more have inundated MPs with letters, phone calls, emails and tweets to express their opposition. This, without a doubt, has become one of the largest campaigns in Canadian history.

In this context, and with a federal election around the corner, Canadian MPs and candidates know there’ll be a real political price to pay for voting through this reckless, dangerous, and ineffective legislation.

We’ve been hearing more and more voices like the one from our community member Kyle Young saying “If you vote for Bill C-51, your party, and you will never receive another vote from myself, or family ever again in our lives.”

This is why we are not giving up. Now we’ve got to take the next step and get all parties to repeal Bill C-51.

So far the NDP and the Green Party have pledged to repeal the unpopular legislation, and the Liberals went from supporting it wholeheartedly to being more cautious and promising amendments (or even voting against it in the case of the independent Liberal Senators). It is time to put pressure on all the major political parties to commit to kill bill C-51, and demand accountability for those who haven’t committed to do so.

Our long-term goal is clear — the complete repeal of Bill C-51, a recognition of the privacy rights of the Canadian people, and strong accountability and oversight for surveillance practices.

It’s never been more important to add your voice to our growing campaign. You can pitch in by signing our petition at KillC51.ca, by using our quick tool to get a letter published in your local newspaper, or by chipping in to power this fight over the long run at https://OpenMedia.org/privacy/donate