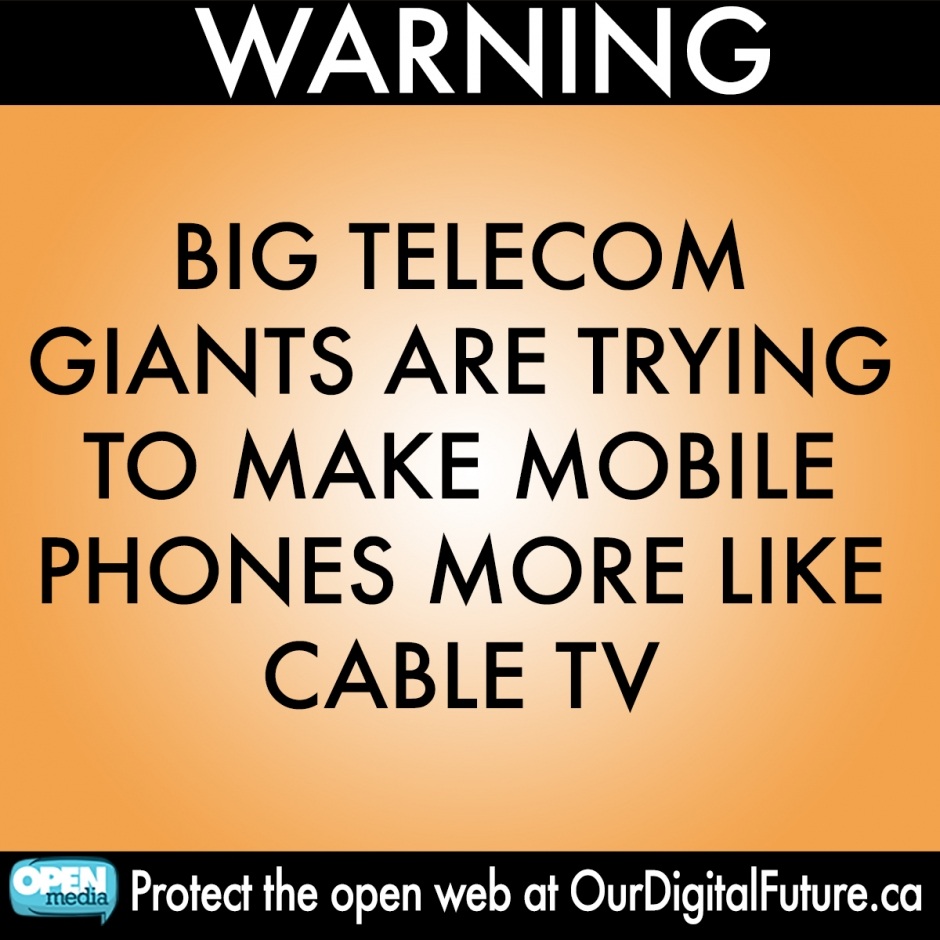 Last week, one of Canada’s Big Telecom giants announced a controversial new scheme that will give them more power to control how you use the Internet on your mobile devices – and, if we don’t speak up, the Big Three will soon follow suit. Videotron wants the power to hand-choose which mobile streaming apps and services are more expensive than others. How are they doing this? By bundling them into outdated Cable-TV-style packages for mobile phone users. As a result, they’re giving unfair advantage to the services they decide are “worthy” of our attention and discriminating against others – an anti-user practice that positions them as gatekeepers of our mobile networks, and violates Canada’s open Internet (AKA: Net Neutrality) rules.

Others are already challenging Videotron, and Canadians need to join this fight before these telecom giants set a dangerous new precedent that threatens the open web. Luckily, OpenMedia has just launched a pro-Internet election platform demanding affordable access, free expression, and a surveillance-free Internet – a platform would ban this type of discrimination.

As part of this, we will be asking parties and candidates across the country to guarantee that apps, services and data are treated equally across all online platforms – including mobile. Join us today, and demand all Canadian political parties ensure fair Internet openness rules (AKA: Net Neutrality rules) by speaking out at OurDigitalFuture.ca.

Sadly, this isn’t the first time Big Telecom have tried to pull this off. You may remember that Bell was caught making video streaming services like Netflix up to 800% more expensive than their own service Mobile TV service. But the good news is we’ve stopped them before, and we’ll stop them again.

Please join us by pledging to vote for the open Internet in the federal election this fall.

What Exactly is the Problem?

This move lays the groundwork for a serious shift that endangers Canada’s open Internet. Videotron’s scheme has the potential to set a new precedent in unjust preferential treatment of services, which would encourage other Canadian telecom providers to make certain apps and services more expensive for their users too. Prominent critics warn that if Videotron’s efforts prove successful, the Big Three – Bell, Rogers, and Telus – will follow-the-price-gouging-leader as soon as possible.

Videotron is thumbing their noses as the CRTC and the Canadians like Ben Klass who led the charge to stop this type of scheme the last time it reared its ugly head.

So let’s take a look at what it means for their customers. If you are subscribed to Videotron’s “Premium Plan,” which features a 2Gb data cap, then access to popular services like CBC Music, Soundcloud, Apple Music, iTunes Radio, and any podcasts you stream will be more expensive than a handful of services bundled together by Videotron – a bundle that includes a very limited assortment of services.

Don’t be fooled by the Videotron’s deceptive marketing. The offer is only available on their highest-priced packages. So they want to trick you into upgrading to their most expensive plans (which range from $65 to $85 dollars per month) so that they can exempt (or “zero-rate”) certain services and applications from their data caps – a move designed to make Canadians spend even more on their cell phone bills than they’re already spending.

Instead of simply raising the data caps and allowing all applications to compete with each other on a level playing field, Videotron appears to want to choose which services will be more expensive. This allows the telecom giant to “double-up,” by charging customers first for more expensive plans, and then also making other services Canadians use outside the bundle more expensive.

As others have pointed out, a scheme like this is in violation of no less than three key sets of rules designed to protect Canadians: the Telecommunications Act, Canada’s Internet Traffic Management Practices (ITMP) (AKA: Net Neutrality), and the CRTC’s landmark Mobile TV decision.

In response, we have to fight back.

OpenMedia will continue to monitor this situation closely, and let you know what you can do speak out. In the meantime, if enough people join our pledge to vote for the Internet we can have the leverage we need to put our crowdsourced plans into law – including clear, fair rules that ensure all data is treated equally across all platforms.

Join us and pledge your vote to ensure Canada’s open Internet rules are respected across ALL platforms – including mobile.