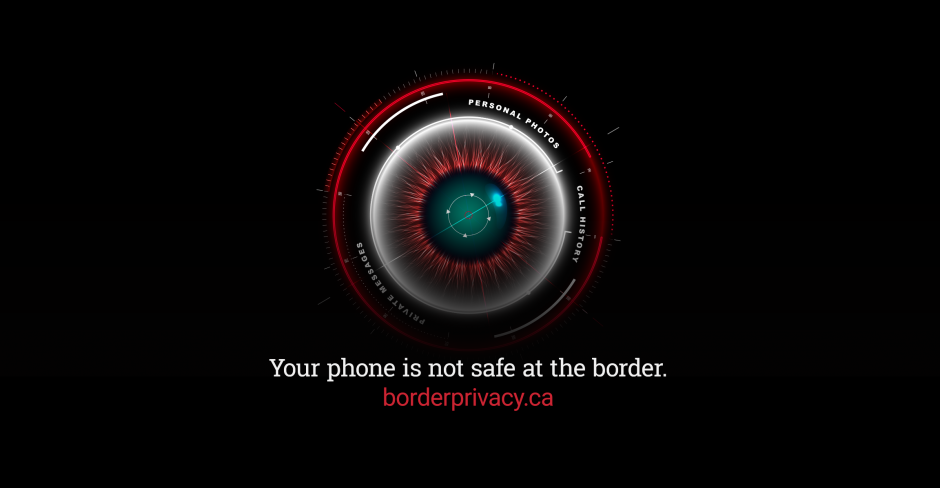 Vancouver International authorities don't want people to know about digital strip searches at the border, but we're fighting back

What would you do if a Canadian border agent demanded to look through your phone or laptop? Would you know what your rights are in that situation, or how to file a complaint if you felt your privacy was violated?

Not many people in Canada know about out-of-date search laws which border agents interpret as giving them the power to look through digital devices without a warrant or even suspicion.

We knew we needed to take action to stop these massive privacy violations. So we set out to buy billboards inside the Vancouver International Airport Skytrain terminal to warn travelers. But Vancouver airport officials refused to run our ads, with no explanation.

It's deeply concerning that YVR officials appear to want to prevent travellers from knowing this information.

People deserve to know their rights. This campaign is promoting publicly available information, and aids travellers in knowing what to expect if their devices are searched at the border. The information we are providing has been legally vetted by trustworthy sources, and is in alignment with recommendations put forward by Canada’s Ethics committee.

We're not going to let this kind of censorship win. With the support of OpenMedia donors, we're already aiming to double our advertising, and plaster public transit with our ads so that our message reaches even more people than before.

To support the campaign, check out the website here: borderprivacy.ca and make a contribution towards our advertising efforts here.

Our digital devices — like cell phones, laptops, and hard drives — contain some of our most personal, private information.

Photos, emails, browser history, call records, social media posts, text messages, as well as apps for banking, personal health, and so much more — they can all reveal extraordinarily private information about a person. It’s no wonder that most people would think twice before handing their phones over to anyone.

But that’s not how Canada’s border laws see it. In fact, the law currently classifies digital devices as ‘mere goods’ — the same classification given to ordinary luggage like a bag of t-shirts. The courts interpret our legislation to mean that customs agents can search your devices without even any suspicion. And worryingly, many of the guidelines that agents use come from operational bulletins, instead of laws from the Customs Act.

This means that in much the same way as a border guard can go through the clothes in your luggage, they can thumb through the personal contents of your phone. It’s an offense to refuse to cooperate, including the possibility of arrest for refusing to disclose passwords.

To you and I, it may seem clear that there’s a huge difference between the things we put in our suitcases, and the contents of our phones and laptops. But simply put, the laws that govern these kind of searches were created long before it was common to carry tiny devices that are capable of storing thousands of images, messages and files, and they have not been updated to reflect the rapid evolution of our modern electronic devices.

That’s not to say that our government hasn’t been pressured to change these laws.

Canada’s own ethics committee, the Standing Committee on Access to Information, Privacy and Ethics, produced a report with a series of recommendations on privacy at the border in December 2017. Chief among them were:

That the guidelines to searching devices which customs agents work from be made transparent and written into the Customs Act; to replace the threshold for searching devices to ‘reasonable grounds to suspect, and that the Government of Canada begin tracking how many devices are searched and provide this information to the Privacy Commissioner.

And yet even of these modest recommendation, only one has been accepted: the recommendation to track and report on device searches at borders and airports.

Most people in Canada don’t know much about these laws, which is why the government hasn’t felt much pressure to update them to include protections for our private data. That’s the reason we’re spreading the word about your rights at the border far and wide, and asking everyone to take action to tell decision makers that now is the time to act.

Here’s what we’re telling them needs to change:

People in Canada need a legislated regime with built-in rights of challenge, as well as public transparency and reporting obligations. And they deserve privacy protected by up-to-date, modern laws that reflect the current realities of our digital age.

Learn more about your rights at the border: https://bccla.org/our_work/electronic-devices-privacy-handbook-a-guide-to-your-rights-at-the-border/