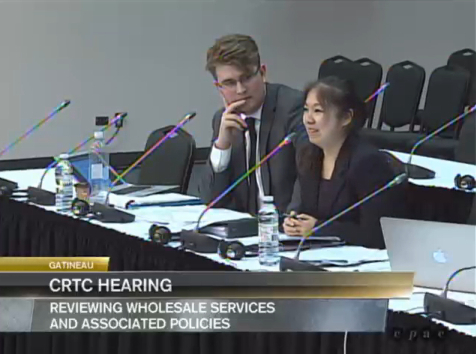 We delivered your voices. Now, will the CRTC listen?

Late last night, Cynthia Khoo and I returned from our trip to the CRTC’s headquarters in Gatineau, Quebec, where we delivered the voices of over 30,000 Canadians directly to some of the country’s most powerful decision-makers. Right now, the Commission faces a choice: they can either listen to Canadians and create fair open access rules that increase our access to affordable, independent, high-speed Internet providers across the country (including next-generation fibre technology) – or ignore us, and give Big Telecom the power to block us from from these vital services. With the hearing nearing a close, the Commissioners will soon deliberate, and weigh our voices against those of Big Telecom. But, in the meantime, there’s good news: we have every reason to believe that you made a huge impression on the decision-makers. And below, you’ll find my take on how exactly this happened.

As mentioned above, the hearing was one of the final stages of a consultation that will determine whether telecom giants could continue to block Canadians from affordable, independent options for high-speed Internet access, including fibre. We presented on the second to last day of the hearing, and, by all accounts (except maybe those of the Big Telecom giants), our presentation was a huge success. And how could it not have been?

After all, our goals were crowdsourced from over 30,000 Canadians. Our approach was vetted by a network of nationally-recognized experts. And our arguments were painstakingly researched and developed in a significant 92 page submission by our dedicated Communications and Community Engagement Volunteer, Cynthia Khoo. If the Commission is truly committed to “putting Canadians at the heart of their telecommunications system”, then what more could they have asked for?

When we arrived at the hearing, I have to admit I was a bit taken aback to see Big Telecom giant Telus had 15 lawyers, lobbyists, executives, and international experts presenting on their behalf – especially when you compare this with our more modest, two-person team.

But a sense of relief came when, during the lunch break, a number of dedicated OpenMedia supporters rushed toward us, introducing themselves and telling us how happy they were to know that their voices were being represented at this important hearing. And of course, they were joined online by many many more participating on social media. You can see a small handful of us standing together outside the hearing room, as well one of the hundreds of supportive tweets that were sent our way.

While Cynthia hunkered down to make sure we were as prepared as possible, I dashed off with our supporters for a power lunch, where our community members introduced themselves, shared their stories, asked questions, and exchanged ideas amongst one another for how we could work together to improve Canada’s dysfunctional Internet market.

Listening to them, I was overwhelmed by their enthusiasm and generosity. To be honest, I wasn’t sure what to do, so I offered them the only thing I had with me at the time: OpenMedia stickers.

After I handed a bunch out, I turned around to see if I had any more OpenMedia swag in my briefcase to give away – but by the time I looked back they had had all removed the adhesive-protective layer and placed the stickers on their shirts over their hearts. Surprised by this, I turned to Fred, the first fellow who had introduced himself to me, and he asked, “Do you have any more of these stickers? We’ll look for other OpenMedia supporters in the room and make sure they get one. We gotta’ show these guys whose side we’re on.”

I quickly grabbed a wad of stickers and began handing them out to everyone at the lunch table. On the way back to the hearing, one of them joked, “If I get a chance, I’ll be sure to pat one of the Big Telecom lawyers on the back and leave one of these stickers on ‘em.”

By the time the lunch break ended, our team had recruited nearly a dozen supporters who hadn’t introduced themselves during the morning session. Together, they chatted amongst themselves and moved within view of CPAC’s cameras. (If you watch the CPAC video here, you can actually see the little blue and white OpenMedia logos in the audience during one of the afternoon presentations).

We can’t overstate how impressed we were that these passionate advocates took huge time out of their busy schedules to sit through what is, admittedly, a very technical (though important!) proceeding. But they showed up, and made the task before us even more important.

But I’ll never forget what happened next. As our friends at PIAC’s testimony ended, Chairman Blais called us up to begin presenting, and our supporters began clapping in the audience to cheer us on. While this was only the first proceeding I’d ever attended in person, I can be pretty sure of one thing: based on their facial expressions, the Commissioners were not used to this. These hearings are normally pretty serious stuff, but the enthusiasm of our community quickly put a human face on the hearing, and brought energy to the room that was impossible to ignore.

Now, I’m not going to lie: I won’t speak for Cynthia, but when I took my seat in front of the Commissioners, and the cameras turned on us, I definitely felt the pressure. But when I glanced at my phone and saw an outpouring of support on Twitter and Facebook, and felt the force of the supporters in the room behind us, I felt the weight lift off my shoulders.

Together, Cynthia, myself, and all of you placed the voices of over 30,000 Canadians straight at the heart of this proceeding, and made an impression on the public record that won’t soon be forgotten. Let’s hope the Commission doesn’t chose to ignore us.

ICYMI, you can see a highlight reel of the hearing below, and a snapshot of the OpenMedia team cheering us on from our office in Vancouver.