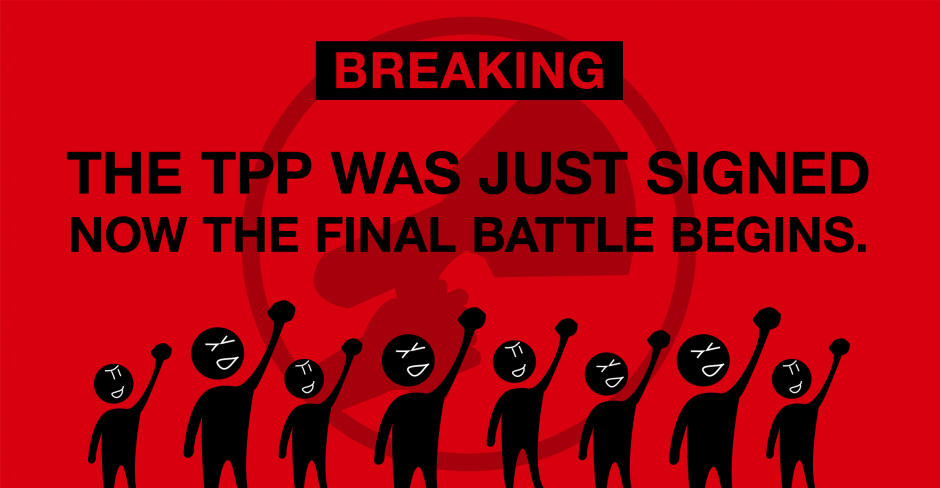 The TPP was just signed. Here’s our plan to fight back.

The final battle against the TPP begins. This is how you can help us stop it.

They just signed it.

Trade ministers from 12 countries have signed the TPP at a casino in Auckland.

These out-of-touch ministers and bureaucrats just ignored the millions of Internet users across the globe who had been pleading with them not to sign this reckless Internet censorship deal.

We know it’s hard to not feel deflated. But the TPP won’t come into force until it gets ratified. That means the final and most crucial phase of the battle begins today. And we need to act fast to force the hands of decision-makers before powerful countries ratify this bad deal.

Your OpenMedia team has a plan to work across boundaries with partners on the ground to mount a coordinated response.

There were strong incentives for all TPP negotiating countries to sign the agreement even when they were unsure about whether they would ultimately ratify it. Now countries have up to two years, but pro-TPP forces will use this occasion to make a big push for ratification. That’s why it’s crucial that we fight back now to counter their lobbyists’ editorials, TV talking points, and ad campaigns.

This is the final battle, and we need to expose the truth about this bad agreement to as many people as possible and empower them to be heard before lawmakers officially debate the TPP.

We’ll build off the success of the Our Fair Deal Coalition, the largest coalition of digital rights and civil society organizations from TPP countries that are fighting for fair rules for sharing and collaborating online. They all want to see rules that help connect people online doing creative and educational work, and fight against the type of restrictive internet censorship regulations brought forward by agreements like the TPP. This will be the official hub for international action against the TPP; a co-ordinated, global effort to fight this terrible deal.

We’ve been battling the TPP for years as it was negotiated behind closed doors, and watched as industry lobbyists got special access while public interest groups like us and citizens like you were shut out. And we won’t stop until we kill the copyright proposals that restrict the open Internet, access to knowledge, and our fundamental rights.

But now the fight turns to the national arena for all participating countries.

This is where you come in. You can fight back by helping us spread the message, empowering the pro-Internet community around the globe to put pressure on TPP decision-makers. If we raise a loud global call, they will have no choice but to listen.

Will you stand with us against the TPP?