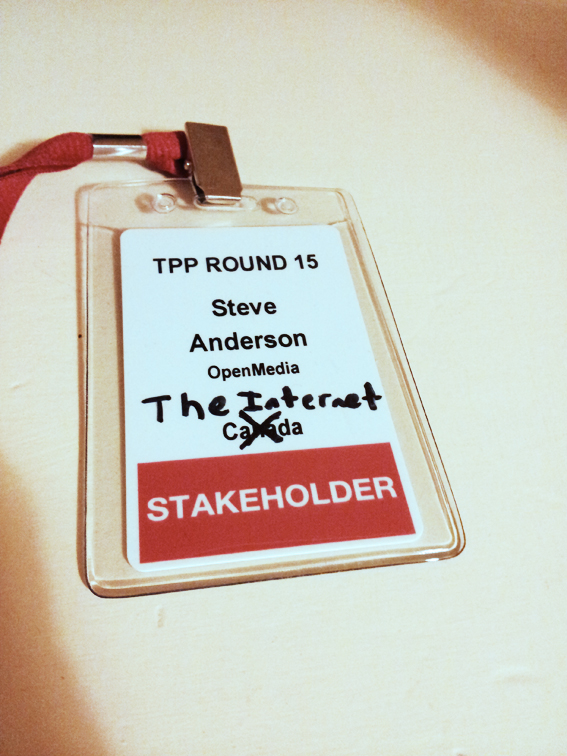 Report back: Inside the TPP’s Internet Trap

Thanks to support from Knowledge Ecology International (KEI) and the Electronic Frontier Foundation (EFF), I had a chance to attend the latest round of the Trans-Pacific Partnership (TPP) negotiations, from December 3rd to the 12th, in Auckland, New Zealand. I agreed to attend and make a presentation to the negotiators. It’s clear to me that the TPP is extreme, and that its problematic secrecy is due to it being driven by industry lobbyists rather than citizens. While the entire process is illegitimate by any democratic standard, I hoped that through my presentation and presence, I could demonstrate that citizens are engaged and have a right to participate. I also wanted to make it clear that new restrictions on Internet freedom will not be tolerated. I recount my experience below, but for a rundown of the major developments at this TPP negotiating round, be sure to check out this excellent piece by OpenMedia’s Catherine Hart. You can also find great reports from the EFF, KEI, and the Australian Digital Alliance.

My TPP experience didn’t start out well. Before the meetings began, I received a confidentiality agreement accidentally sent to me from Canada’s Department of Foreign Affairs and International Trade. It’s likely the agreement was meant for industry lobbyists.

Law professor Michael Geist and others took this document to indicate that the Canadian government was setting up a secret insider consultancy group. It appeared that this group would be granted a level of access and input into Canada’s part of the TPP negotiations greater than that afforded to citizens, public interest experts, or web businesses.

When inside the TPP meeting area, I asked a Canadian official about these lobbyist insiders. He denied that there was such a group, leaving an unanswered question: For whom was the confidentiality agreement intended?

That means that I had registered for the TPP meeting on behalf of Internet users, EFF and KEI had used their limited non-profit resources to pay my way, and I (and many others) flew all the way to New Zealand, only to find out I wasn’t allowed to even enter the meeting space.

To put this in perspective, in other TPP negotiating rounds, people were not only allowed to enter the premises, but were also allowed to set up information booths and host meetings. At a previous TPP round Citizen Trade Campaign even projected citizen comments we collected inside the meeting space.

It then comes as no surprise that there was a public rally outside (which clearly included many Internet users), and that experts and digital rights groups put out this statement criticizing the TPP for the lockout.

Now even Open Society Foundations and the Internet Society (which was started by some of the founders of the Internet) are calling for a more transparent and participatory process.

The excuse that we receive for all the secrecy is that honest negotiations can’t happen in public. This is worst excuse in the history of bad excuses. The secrecy is very clearly meant to keep us in the dark until it’s too late—U.S. Trade Representative Ron Kirk even said in a moment of candor that they were keeping the TPP secret to avoid similar public outcry to that which halted the Free Trade Agreement of the Americas (FTAA).

The “stakeholders” day felt more like it was tailored and catered to a lobbyist agenda. A real stakeholders day would more fully include the biggest and most important stakeholder of all: the public. It would be an open forum that invited direct citizen participation. It would be live video-streamed, and there would be an active dialogue on major social media platforms like Twitter. And it would certainly include public access to the texts being negotiated.

These are all basic attributes of 21st century public policy processes. For something that brands itself as a “21st century agreement”, the TPP negotiation process falls far from meeting these expectations.

Inspired by open collaboration and connection on the web, people increasingly believe they have a right to participate in decisions that affect their daily lives. It’s about time that the bureaucrats and lobbyists involved in the TPP recognize this.

I did my best to bring the voices of citizens and web innovators into the process with my presentation. My hope was to bring these voices into the process, and insodoing to demonstrate what a legitimate policy process looks like. This is an approach we’ve used in Canada with the CRTC to great effect—and I hope, unlike what ultimately happened with the CRTC, that a mass citizen revolt isn’t needed for TPP officials to get the message.

Meeting with a TPP negotiator

Fortunately, I did get the opportunity to speak with one of Canada’s negotiators at length. I let them know that the TPP process is illegitimate, and that until we know the threats are gone, there will be political costs for the government – especially for the Trade Minister, MP Ed Fast.

I mentioned that they could learn from the experience of the CRTC—whose former Chair’s term was not renewed after a decision about metered Internet billing sparked a wave of public outcry—and from Canada’s Public Safety Minister Vic Toews—whose career has basically been ruined since he tried to impose warrantless online spying on law-abiding Canadians.

I took to opportunity to let him know how a democratic process should run (see above). I asked that they do their part by making their meetings with lobbyists public in a regularly-updated and accessible online platform—a suggestion to which they seemed amenable. I also asked that the number of meetings with industry lobbyists and with those working for the public interest be equal.

I pressed them to tell me why the results from Canada’s consultation process are themselves kept secret. I mentioned that as far as I could tell, the public told Canada’s government not to enter the TPP—and my inclination seems to be correct judging from information obtained by law professor Michael Geist. The negotiator said they would look into it.

Canadians should definitely be asking why their government entered the TPP, especially if the government’s own public consultation clearly called for them to stay out of it. And if Canadians were against the TPP, then who lobbied our government into taking part?

Non-answers from the stakeholder briefing

At the end of the stakeholder day there was a briefing, in which the chief negotiators each said a few words about what had been accomplished in this round of negotiations and then answered questions from the audience – again, made up mostly of lobbyists. The majority of comments and answers were vague platitudes.

I took the opportunity to ask Canada’s chief negotiator, Kirsten Hillman, if she would overwrite democratically-enacted legislation with new Internet regulations negotiated in secret through the TPP.

I made sure to remind her that Canada's copyright bill, C-11, was passed a matter of months ago after nearly ten full years of contentious debate. I also noted that aside from a few issues (many Canadians believe that C-11 still requires new exceptions to digital locks), there is a general consensus amongst the business community, creators, public interest groups, and citizens that, on the whole, this legislation represents a balance.

Her reply sidestepped the question.

She sat there without reply. The audience of mostly lobbyists, and TPP bureaucrats let out a chuckle. They did so because I called her out on her refusal to make this very basic commitment—it’s odd because Canada’s failure to commit to its own legislation puts us at a disadvantage.

This was a sad display of the crux of the problem with the TPP; it is a complete affront on democracy.

It’s amazing, and I think ultimately self-defeating, that under increasing public pressure about this secretive and extreme agreement, trade bureaucrats shockingly went so far as to bar experts from accessing the negotiating venue. Those behind the TPP clearly have something to hide, otherwise they’d realize that the more secretive they get the more suspicious and upset the public will get. The clear fact is that crafting complex trade policy without input from experts and citizens is a threat to the economy, to our democracy, and, at the end of the day, to our family budgets.

It’s amazing that a new series of Internet regulations finds its way into what is being called a “21st century agreement”. Closing down the process is not only wrong, it’s stupid. There is actually wisdom in the crowd, as we can see from the mass collaboration behind Wikipedia, Firefox, and so much else. When a process is closed off, you can’t benefit from the ingenuity and creativity that is out there, latent, and ready to be put to use. I do hope those behind the TPP join us in this new era of participation, and come out on the right side of history. Until then, may the political costs mount.

Join us in speaking out against the TPP's Internet trap at StopTheTrap.net »