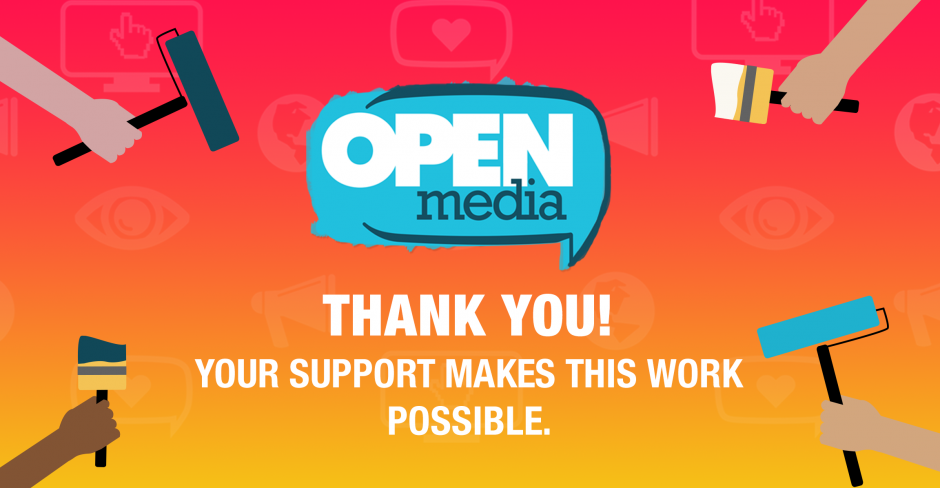 Our mid-year fundraising drive was a great success thanks to you!

Thanks to our community and our generous donors, we’ve met our mid-year fundraising goal!

Our Mid-Year fundraising drive was a success! Because of supporters like you, and our generous donor, Distributel, we met our $50,000 goal during our midyear fundraising drive. Together we can continue to fight to protect the open Internet, and stand up against censorship and surveillance online.

2019 has been a busy year for OpenMedia – and we’re only halfway through!

For years, we’ve been campaigning in the U.S. to defend Net Neutrality. In early March, new legislation to restore Net Neutrality protections was introduced into both the U.S. House of Representatives and Senate. The Save the Internet Act was the result of the outcry of millions of people, including the OpenMedia community, concerned by the repeal of Net Neutrality under Ajit Pai’s FCC. Our battle to save Net Neutrality across borders has encountered multiple obstacles along the way, especially legislators like Mitch McConnell, who have gone out of their way to halt our efforts. But any move that gets us closer to restoring Net Neutrality is a major step in the right direction. We are working to hold Congress accountable to its constituents – not Big Cable.

But the fight doesn’t stop at Net Neutrality, as the core tools we use to protect our privacy online are now also at stake. The Trump administration has proposed to ban end-to-end encryption, which would fundamentally change the way we operate online – putting everything from our communications to our banking information, to our national security at risk. We’ve already seen bad proposals like this passed in Australia, and we can’t let them spread any further. So we’re gearing up to put a stop to this, and protect our security online.

Back in Canada, the fight continues – particularly as a federal election looms. From a new policy direction for the CRTC to introducing a new Digital Charter for Canada, it’s clear that the current government believes that the future of the Internet is going to be a focus during the upcoming election.

The federal budget announced clear targets to bring all of Canada online with high-speed access by 2030, followed by a national connectivity strategy for rural and remote communities. We won’t stop until every single person is connected with affordable, high-speed connectivity, with true choice of providers. But it is so encouraging to see the voices of our community having an impact, as these issues are becoming increasingly mainstream, and supported across all parties.

But there are a number of issues the government isn’t yet paying enough attention to – and we’re not going to stop until they do. Anytime we cross the border, our sensitive digital data is also put at risk. Our personal devices, such as laptops and phones, are subject to invasive ‘digital strip searches’ at the hands of border security. With the help of people across Canada, OpenMedia is asking Public Safety Minister Ralph Goodale to update archaic laws and protect our rights at the border. We have launched a national campaign, including ads on major airport transit in Vancouver, B.C. and a viral video campaign, to inform you about your rights.

The landscape for the future of the Internet in Canada is incredibly uncertain at the moment, with so many pieces of legislation still up for review, or policies yet undecided. Between the reviews of the Copyright Act, and the Broadcasting and Telecommunications Acts, our community has been overwhelming the government’s consultations demanding a better Internet – and now, we’re waiting to see what their plans are, and make sure they stay accountable to their constituents. We’re still working to make sure that any new laws or policies introduced will protect the open, affordable, and surveillance-free Internet.

Privacy, access, and free-expression are the three core pillars of OpenMedia’s work. With your contributions, we are fighting to pass the Save the Internet Act and restore Net Neutrality in the US. We are building up digital privacy campaigns in both the U.S. and Canada, and challenging Big Telecom to provide more choice, better quality, and less costly data. This work is only possible through your dedicated support and generous contributions.

We are incredibly fortunate and grateful for our ally that matched all grassroots donations to OpenMedia. Thanks to their essential contributions, our community is able to come together and work on building a brighter digital future.

Distributel is a key donor and a vital partner in our work to ensure an open and accessible digital infrastructure in Canada. As an independent service provider, they have been making it easier and more accessible for Canadians to connect since 1988. They now also provide a range of high-speed Internet options across provinces in Canada and are committed to helping us break the Big Three telecom oligopoly.

Supporters like you, and donors like Distributel, are the reason we can keep fighting for a free and open Internet. Mobilizing together as a grassroots movement is how we win the toughest of our battles.

So thank you again, and keep an eye on our work in the upcoming months!

Yours for the Internet,

Maitri and the OpenMedia team