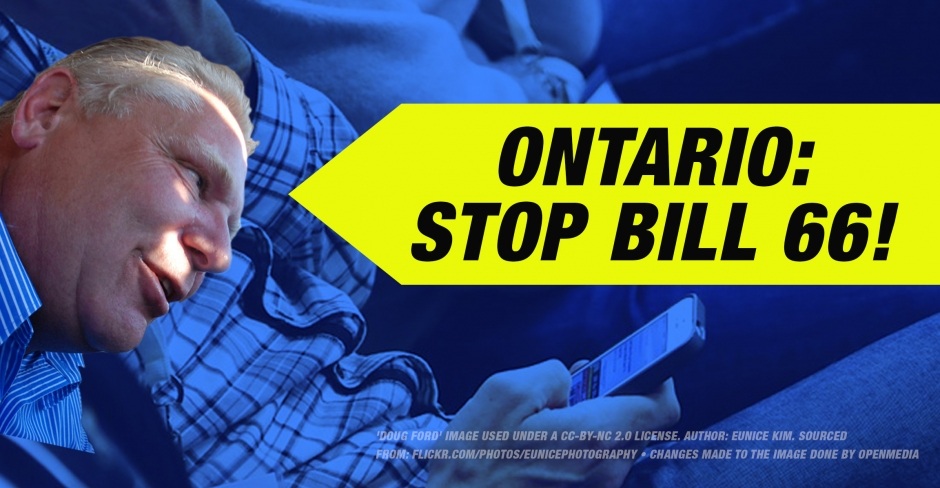 OpenMedia has sent an official letter to the government of Ontario urging it to repeal Bill 66 in its current form and keep the Wireless Services Agreement Act, which provides important consumer protections at the provincial level.

Having some of the most expensive cell phone plans in the world and being notorious for big telecom’s misleading sales practices, one of the last things Canada needs is fewer consumer protections for wireless consumers. This is why when the Ontario government tabled Bill 66, which would scrap the Wireless Services Agreement Act (WSAA), the OpenMedia community was nimble to take action.

The WSAA regulates the contracts between wireless service providers and customers as well as the advertising practices used by the provider. The WSAA states that the contract must be written in plain language that the customer can understand and include, among other things:

The act also prevents wireless providers from changing the terms of the contracts without the user’s consent and caps cancellations fees to $50.

When it comes to advertising, the act regulates the ads providers use to sell their products to ensure users are not being misled. All advertising must prominently include the minimum monthly cost plus any extra fees that come as part of the plan.

The government of Ontario claims that the WSAA “has been superseded by federal regulations [i.e. Wireless Code] which provide nearly identical protections for all Canadians”. However, that notion is a misconception. Rather than being redundant, the WSAA strengthens and complements the existing protections at the federal level stemming from the CRTC’s Wireless Code by filling in some essential gaps and providing stronger enforcement mechanisms.

For instance, the WSAA allows the government to fine a company up to $250,000, whereas under the wireless code the highest penalty for infraction is for a company to compensate the customer only up to $5,000 (pennies for Big Telecom). The WSAA also allows people to file class action lawsuits when a company is systematically violating the law.

Without further ado, below is our full submission addressed to Minister of Economic Development, Job Creation and Trade, Todd Smith making the case for stopping the passage of Bill 66 in its current form and retaining the WSAA in place.

If you’re in Ontario, please take a moment to write your MPP and tell them to stand up for the people and vote against Bill 66. So far 5,800 OpenMedia community members have emailed their MPPs or Minister Todd Smith using our tool — let’s keep the momentum up!