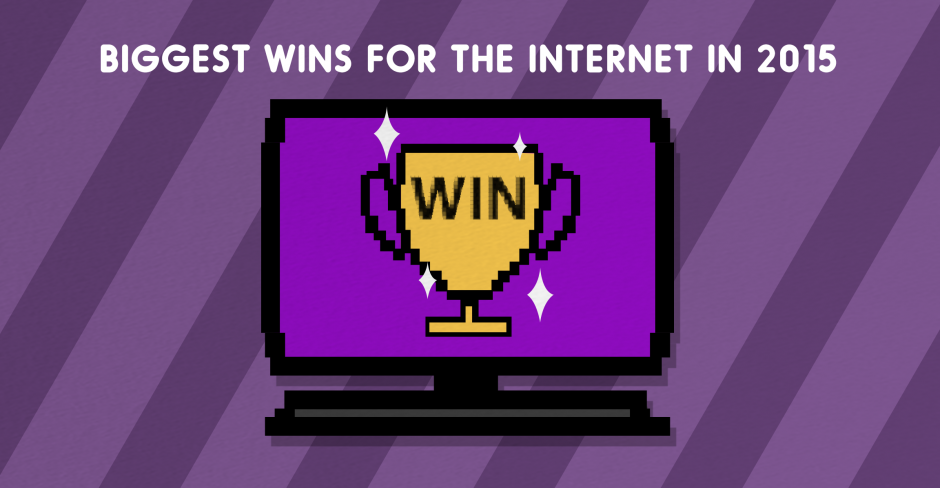 Looking back at 2015: our biggest wins, and the challenges yet to come

2015 was the busiest year in our young organization’s history. Check out what our community achieved together!

It’s been quite a year! Here at OpenMedia there’s a palpable end-of-term feeling around the office, and you can almost sense the team starting to exhale after what’s been the busiest—and most exciting—year in our young organization’s history.

This time a year ago, we knew we were going to be in for quite a ride – but we’d never have guessed just quite how much we’d pack in. Let’s take a look back at some of the highlights of the last 12 months:

Those are just a few of the highlights for us, but it’s also true to say we’ve poured a ton of effort into campaigns that are still ongoing, and will continue to be a big priority for us in 2016. Top of the list here is the Trans-Pacific Partnership with its reckless Internet censorship plan and, in Canada, Bill C-51, the reckless spying bill introduced by the previous government despite opposition from over 300,000 Canadians. Stay tuned in 2016, as we’ll have lots more to say on these key issues!

We can never say this often enough: We’d never have achieved any of these wins, or been able to engage effectively on any of these campaigns, without support from you, our community. As community member Hana Brynda told us, “We can accomplish so much. Get organized over the net and change the world for the better!”.

In particular, we want to sincerely thank our OpenMedia Allies, our generous community members who donate monthly to ensure we can sustain our small organization over the long-term. We also want to thank our incredible volunteers—there are too many to name but we’ve had a go here—we couldn’t be more grateful to each and every one of you!

And remember, if you’d like to make a donation or become a monthly ally, you can do so right here– with threats to the free and open Internet set to intensify in 2016, we’ll need your support more than ever.

Because, yes indeed, 2016 is shaping up to be a doozy. We’ll be facing critical challenges on the Trans-Pacific Partnership, Net Neutrality, EU copyright rules, Canada’s Bill C-51, and much, much, more. Don’t miss a moment of the action: check in regularly here at OpenMedia.org, and don’t forget to follow us on Facebook and Twitter.

In the meantime, the whole team here will be taking some down time, so that we can hit the new year refreshed and ready to go. Our office will be closed from December 24th, and we’ll be back in action on Monday January 4th - so until the new year, Happy Holidays everybody!