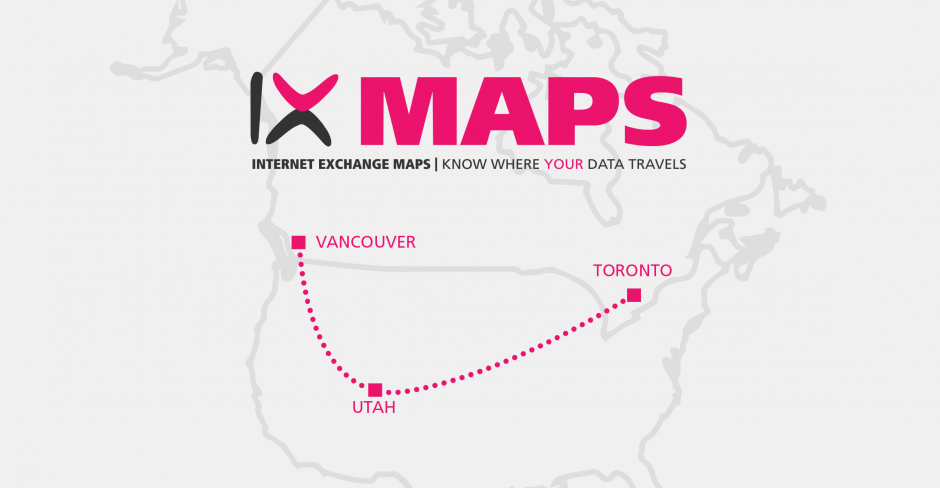 IXmaps: See where your data travels!

There’s nothing faster than the Internet. When it’s working properly, that is. And isn’t it just when the Internet is not performing at the speed of caffeinated clicks that we pause and consider the backstory to the seemingly instant connection at our fingertips?

Well, what happens on the Internet’s backstage is far more elaborate than most of us would assume. In fact, many Canadians would be surprised to learn that much of our daily traffic and website visits — even traffic from one destination in Canada to another — are redirected via the United States. In this way, short emails sent from one side of Toronto to another, for example, will often first travel through major cities south of the border.

Why does this happen? Well, we like to think of the Internet as a cloud, but most of it relies on a select few buildings — called Internet Exchanges — that connect the most important Internet cables together. Internet Service Providers and Content Delivery Networks use these key buildings to exchange traffic between their networks. And because the U.S. hosts far more Internet Exchanges than Canada does, often even our domestic traffic gets routed through U.S. exchanges on its way to its destination, even when that destination is Canadian.

Unfortunately, many of the Internet Exchanges based in major U.S. cities — such as Seattle, New York, and Chicago — include listening posts, or ‘splitter rooms’, installed by the U.S. National Security Agency (NSA).

If your data travels through the U.S., it passes through one of these cities and is subject to being monitored by the NSA, with information about you collected, analyzed, and stored at the main NSA Data Center in Utah. Once outside Canada, your data is treated by the NSA as foreign and loses Canadian legal and constitutional protections.

This holds alarming implications for your privacy online. When your private communications metadata is collected in bulk in this way, experts warn that it enables the NSA to paint a detailed picture of your personal life, including your financial status, medical conditions, sexual orientation, and even your political or religious beliefs.

Enter, the IXmaps project, led by long-time member of the Protect our Privacy coalition, Professor Andrew Clement, supported by a valiant team of researchers at the University of Toronto and York University. The IXmaps project has developed an interactive mapping tool that enables Internet users to view the routes that data packets take across the Internet, with surveillance and other interesting features highlighted along the way.

Today, OpenMedia is excited to partner with our friends at IXmaps to launch a new educational platform. Our goal is to raise awareness among Canadians of where our data travels on the Internet, and to spark discussion around potential remedies that could ensure more of our data stays in Canada. We’re grateful to the Office of the Privacy Commissioner of Canada, whose financial support helped make this project possible.

We’ll have much more on all this over the months to come, but for now why not visit our brand-new platform at OpenMedia.org/en/IXmaps, and learn more by viewing our new video: