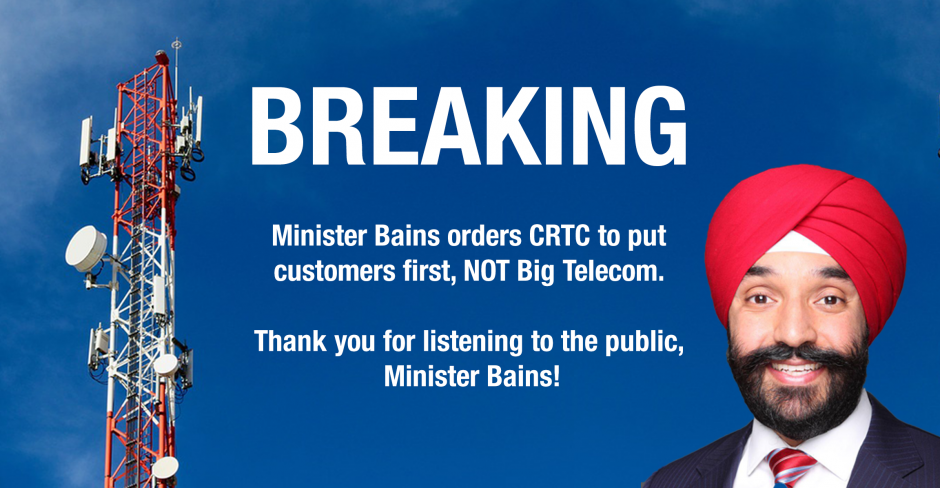 Today the government introduced a new proposed policy direction for the Canadian Radio-television Telecommunications Commission (CRTC). Notably, this policy veers away from a previous 2006 government direction by placing the focus firmly on affordability, competition and the interests of consumers, rather than market forces and telco self-regulation.

This policy direction sends a strong signal to the CRTC that it’s time to put the needs of customers before those of Big Telecom. The directive clearly paves the way for smaller innovative providers who can finally bring relief to our uncompetitive and unaffordable telecommunications market. Today’s announcement comes the same week as the CRTC is expected to announce its review of wireless services in Canada, and the timing couldn’t be better. All barriers to fixing our broken telecommunications market have been removed – now it’s just up to the CRTC to decide what they’re going to do for us.

The previous policy direction for the CRTC was issued in 2006, and has since shaped decisions to focus on market forces.

OpenMedia has been asking the federal government for a new policy direction for years, including in our submission to the current Broadcasting and Telecommunications Legislative Review, endorsed by over 9,600 people who spoke out at https://act.openmedia.org/CanadasInternet.

Looking for the press release? Find it here.